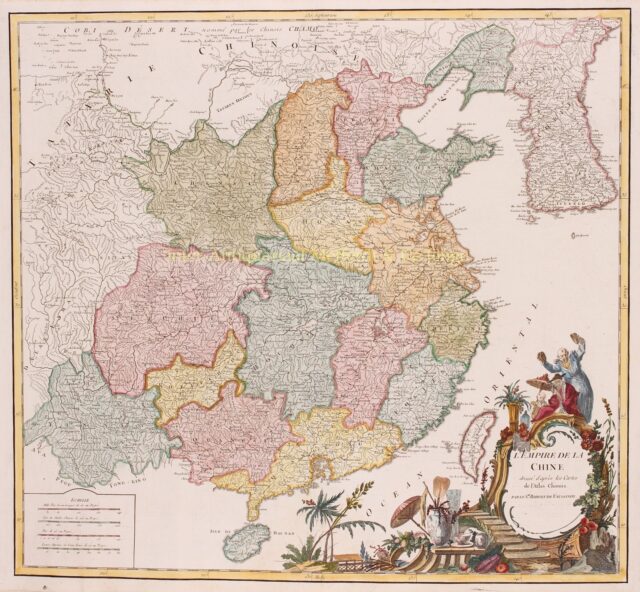 “L’Empire de la Chine”. Copper engraving of China, Korea and Formosa engraved by Guillaume Delahaye, and published by Robert de Vaugondy as part of his Atlas Universel in 1751. Coloured by a later hand. Size: 48,5 x 53 cm.

The map was made when the Qing Dynasty marked the height of its power. During this period, under the Qianlong Emperor the empire ruled over 13 million square kilometers of territory. At the same time China also began suffering from mounting overpopulation. Where population growth was stagnant for the first half of the 17th century due to civil wars and epidemics, prosperity and internal stability gradually reversed this trend. The introduction of new crops from the Americas such as the potato and peanut allowed an improved food supply as well, so that the total population of China during the 18th century ballooned from 100 million to 300 million people.

The map offers splendid detail throughout. It was published in the Atlas Universel. Capital for the publication of the atlas was raised by subscription and the list of subscribers included illustrious names such as the mistress of Louis XV, Marquise de Pompadour, who ordered two copies.