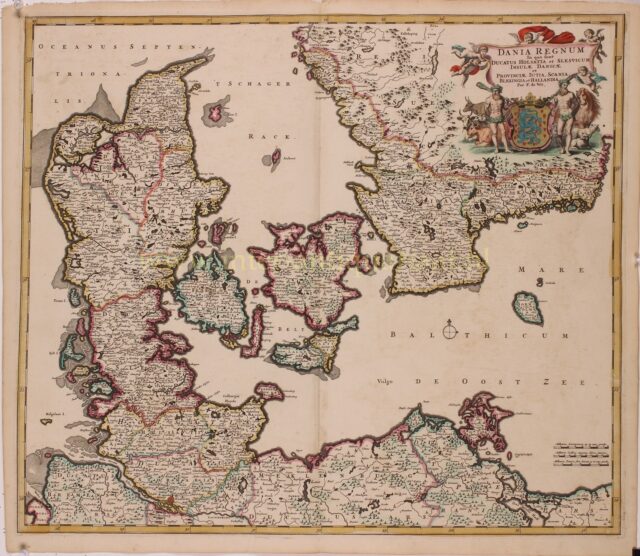 The Dano-Norwegian Kingdom grew wealthy during the 16th century, largely because of the increased traffic through the Øresund, which Danes could tax because Denmark controlled both sides of the Sound. The trade in grain exports from Poland to the Netherlands and to the rest of Europe grew enormously at this time, and the Danish kings did not hesitate to cash in on it. (The Sound duty was only repealed in the 1840s.)

The Danish economy benefited from the Eighty Years’ War (1568–1648) in the Netherlands because a large number of skilled refugees from that area (the most economically advanced in Europe) came to Denmark. This helped to modernize many aspects of society and to establish trading links between Denmark and the Netherlands.

Denmark–Norway had a reputation as a relatively powerful kingdom at this time. European politics of the 16th century revolved largely around the struggle between Catholic and Protestant forces, so it seemed almost inevitable that Denmark, a strong, unified Lutheran kingdom, would get drawn into the larger war when it came. The Thirty Years’ War went badly for the Protestant states in the early 1620s, and a call went out to Denmark–Norway to “save the Protestant cause”.

King Christian IV, who was also a duke of the Holy Roman Empire on the basis of his possessions in Holstein, decided to intervene in the conflict raging in northern Germany. The campaign ended in defeat. In the Treaty of Lübeck, Christian made peace and agreed to not intervene in Germany again. The war in Germany had been very expensive and Christian saw no other recourse than to raise the Sound tolls. Unfortunately, this act pushed the Netherlands away from Denmark and into the arms of Sweden.

In 1643 Sweden’s armies suddenly invaded Denmark without declaring war. The Netherlands, wishing to end the Danish stranglehold on the Baltic, joined the Swedes in their war against Denmark–Norway. In October 1644, a combined Dutch-Swedish fleet destroyed 80 percent of the Danish fleet in the Battle of Femern. The result of this defeat proved disastrous for Denmark–Norway: in the Second treaty of Brömsebro (1645) Denmark ceded to Sweden the Norwegian provinces Jemtland, Herjedalen and Älvdalen as well as the Danish islands of Gotland and Øsel. Halland went to Sweden for a period of 30 years and the Netherlands were exempted from paying the Sound Duty.

In 1657, during the Second Northern War, Denmark–Norway launched a war of revenge against Sweden which turned into a complete disaster. Denmark–Norway capitulated and gave up all of Eastern Denmark.

The country’s main objective in the following decades was the recovery of its lost provinces from Sweden. In the 1670s, Denmark–Norway had regained enough strength to start a war with Sweden to recover its lost provinces. However, in spite of Denmark’s outside support, naval dominance and initial support from the population of the former eastern provinces, the war ended in a bitter stalemate.

This map was made in those turbelent times and is centred on Zealand with Copenhagen (“Koppenhaven”) and Funen (“Fionia”). Shoals and sand banks are marked off various coasts. In the top right corner, the title of the map is featured on a large cloth held aloft by putti, above the Danish Royal coat of arms supported by two rustic figures and a host of domestic animals.