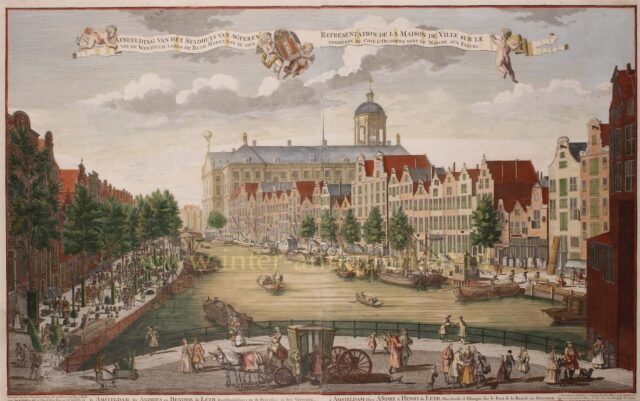 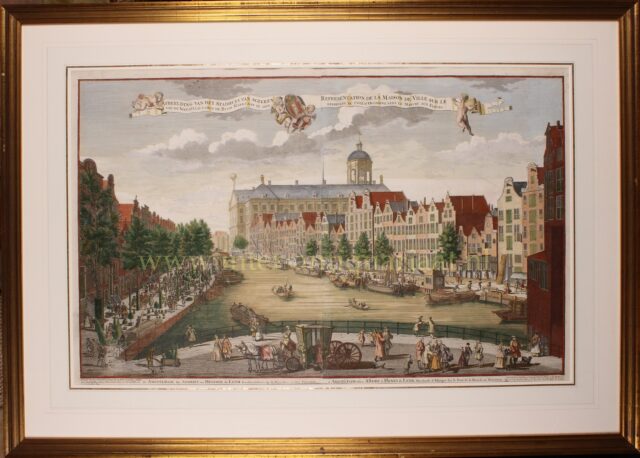 From the Weessluis bridge (litt: ‘orphan’s sluice’, named after the nearby orphanage) we see the Nieuwezijds Voorburgwal with in the distance the backside of the impressive town hall (from 1808 Royal Palace of Amsterdam), on the left there is the flower market.

In the past, Amsterdammers bought their flowers, plants and trees – just like other products – on the market. Different markets existed for different commodities. The market on the Nieuwezijds Voorburgwal was the most important flower market in the city in the 18th century. The traders often brought in their goods by boat and moored here to sell their flowers and plants. (In 1862 the flower market moved to the Singel, between the Munt and the Koningsplein.)

On the other side of the water there is the “pijpenmarkt” the pipe market, where tobacco pipes (made from clay) were unloaded and traded. At the pijpenmarkt there were jetties for ships to unloaded their cargo, coming from factories many of which were in the city of Gouda. From the same quay a little further on, the trekschuit (litt: “towing barge”, a ferry service also meant for passengers) also departed for Gouda. Closer are ships for the ferry to Noordwijk. Sailing ships that is, for travelling to Noordwijk is along the coast.

Behind the town hall is the basis of the unfinished tower of the Nieuwe Kerk. (In 1783 this basis was largely demolished.)

The Nieuwezijds Voorburgwal was filled in in 1884, the weessluis bridge was demolished in the process.