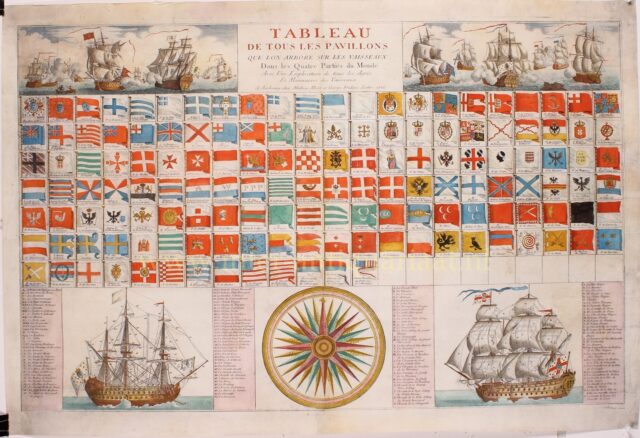 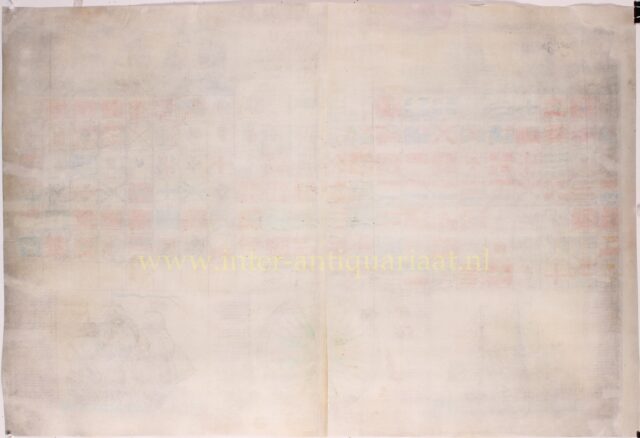 THE WORLD’S FLAGS DURING THE AMERICAN WAR OF INDEPENDENCE

Beautiful and rare overview of 145 flags that were flown on ships from the four continents in 1786. The print was published for several years in succession, with constantly changing flags.

Here we still see the Royal Standard that was used by king Louis XVI of France. It was only three years until the French Revolution (1789), after which the tricolore was used.

We also see one of the earliest depictions of the American flags, such as the 13-star flag used after the United States’ Declaration of Independence (1776) and the American merchant flag.

One of the flags of the Empire of China is depicted as a large whirlpool surrounded by decorations, an incorrect interpretation of the flag of the Qing dynasty, a dragon on a yellow field with eight flags.

On either side of the title are naval battles between France and Britain during the American Revolutionary War. On the left is the Battle of Ushant that took place on July 27, 1778, off the coast of Brittany. The scene shows three French ships, the Bretagne, the Ville de Paris and the Saint-Esprit, and two English ships, the HMS Victory and HMS Formidable. The scene on the right illustrates two naval battles that took place respectively on September 20, 1778 near Lisbon between HMS Warwick and the Triton, and the battle between the frigates Belle Poule and HMS Arethusa south of Cornwall on June 17, 1778. All three naval battles were won by France.

In the lower part of the engraving a French ship, left with sails lowered and right with sails hoisted, and a legend in French and Spanish. In between a large compass rose.