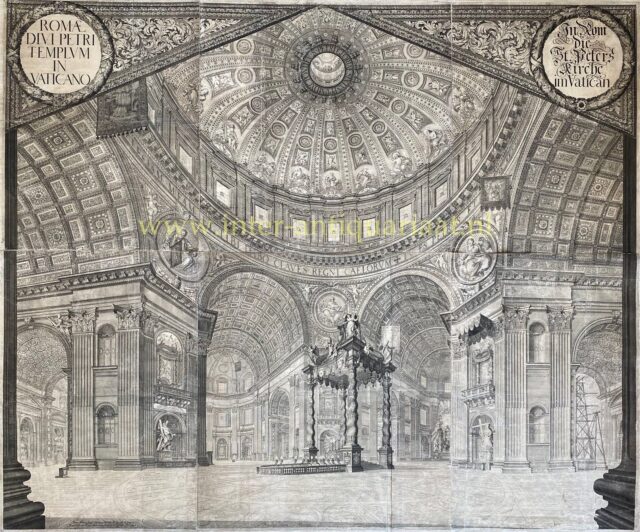 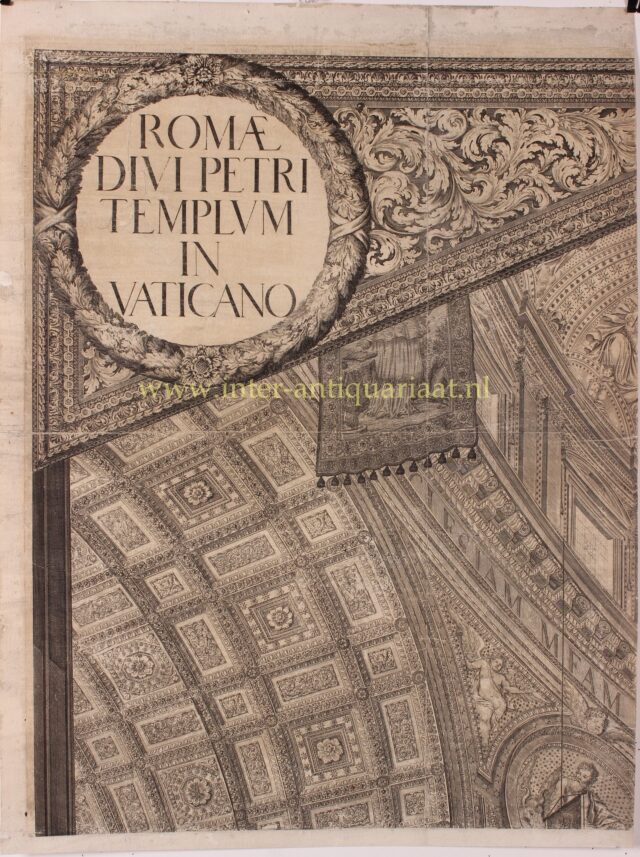 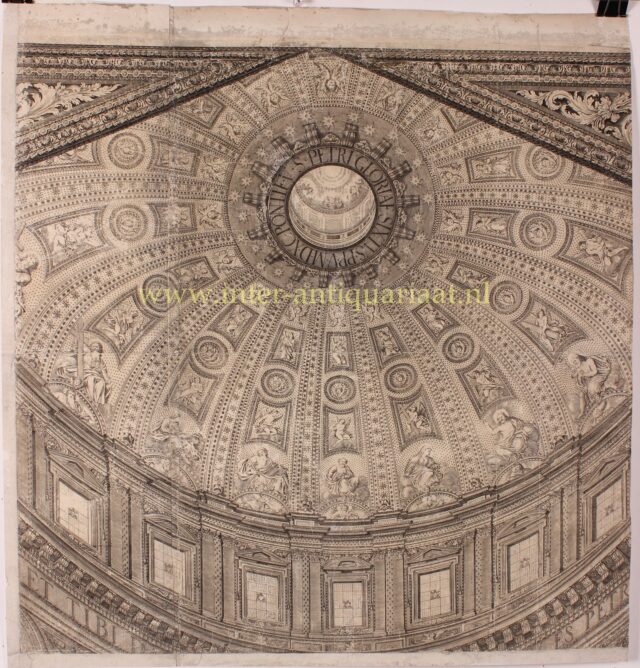 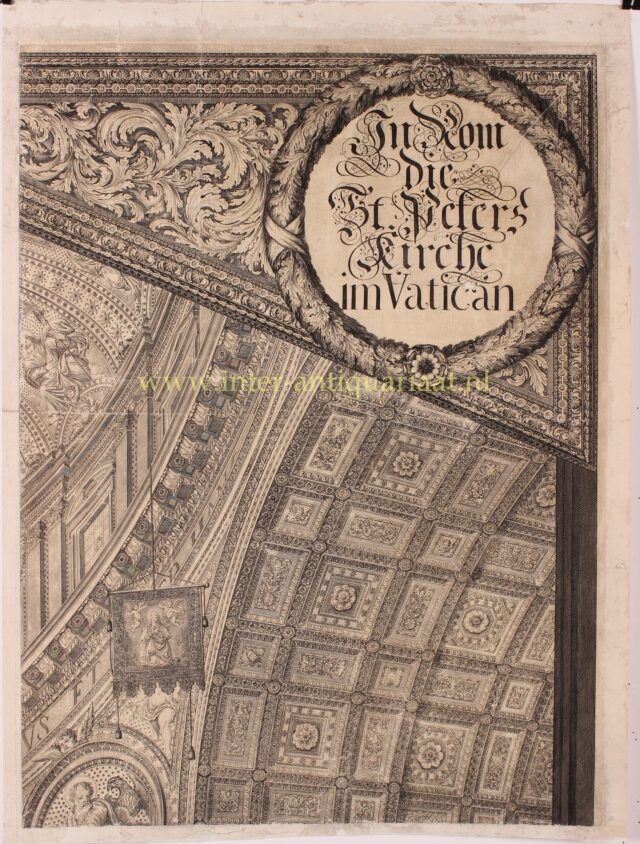 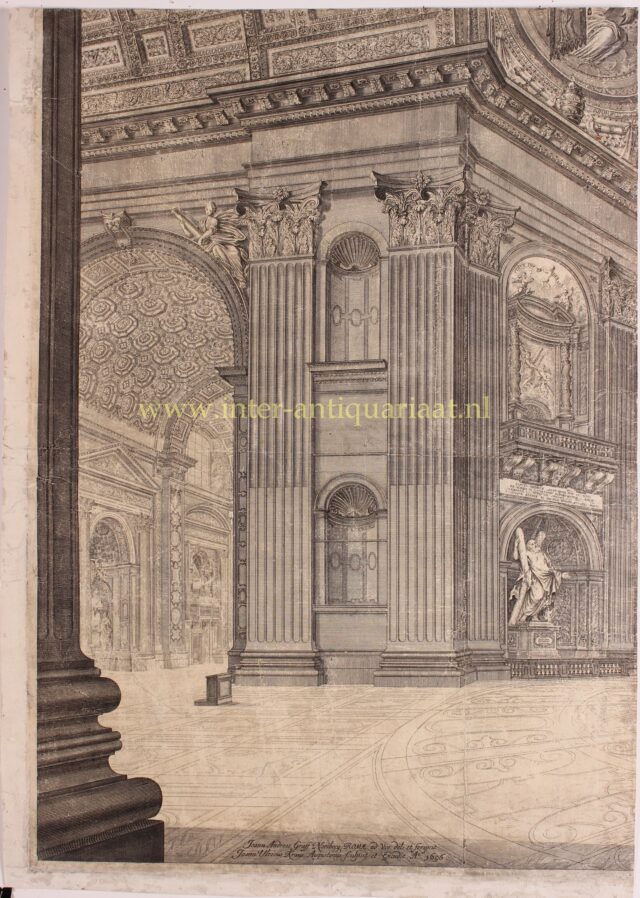 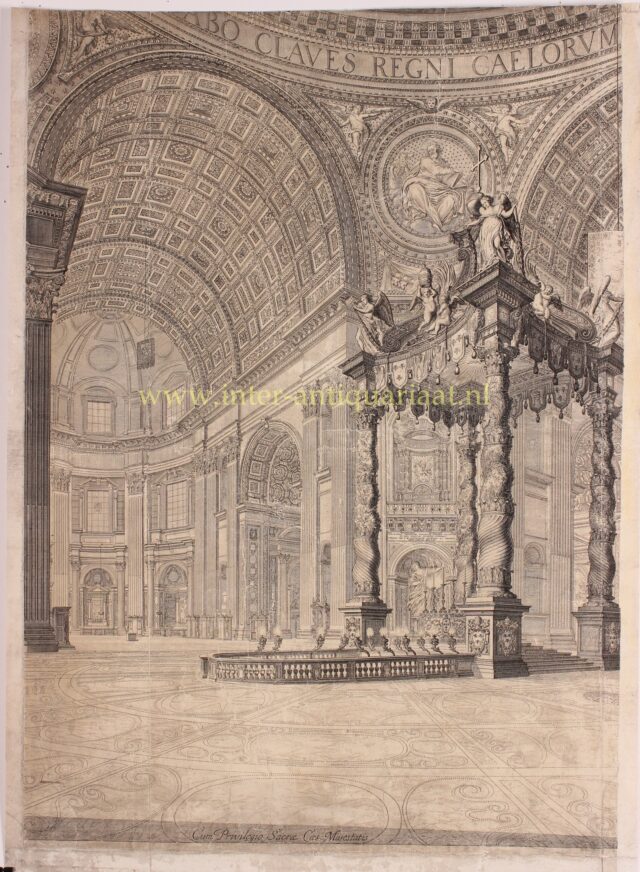 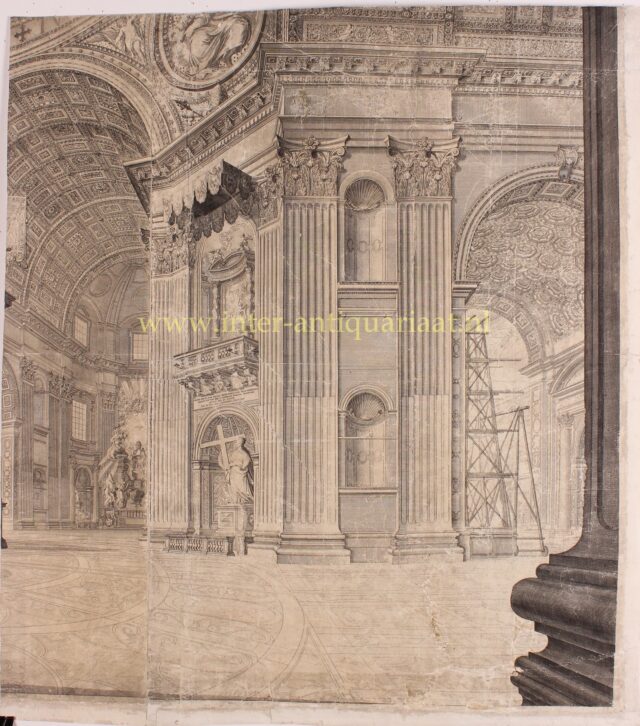 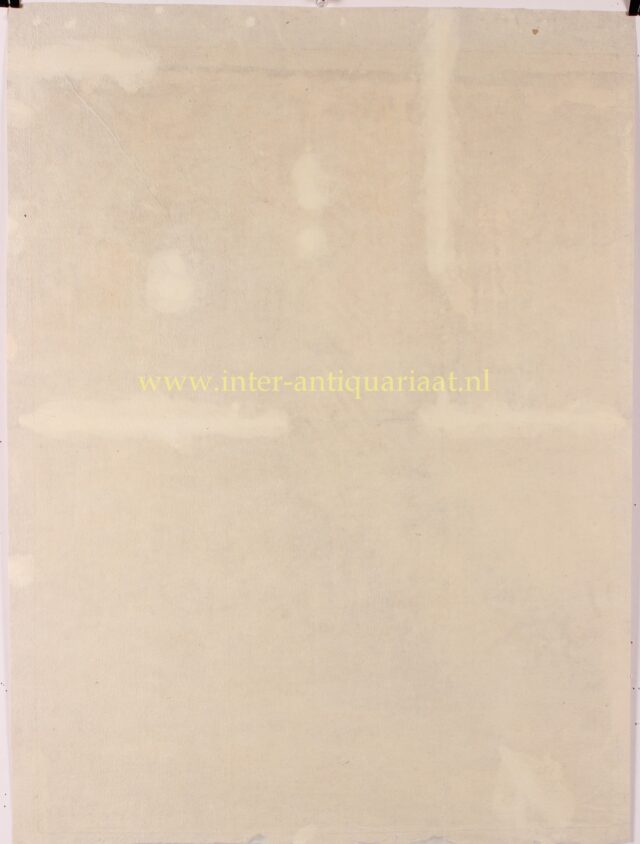 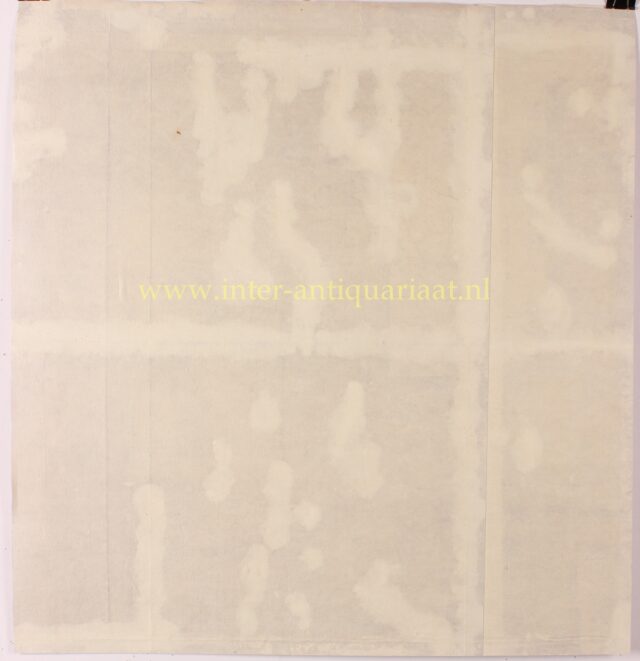 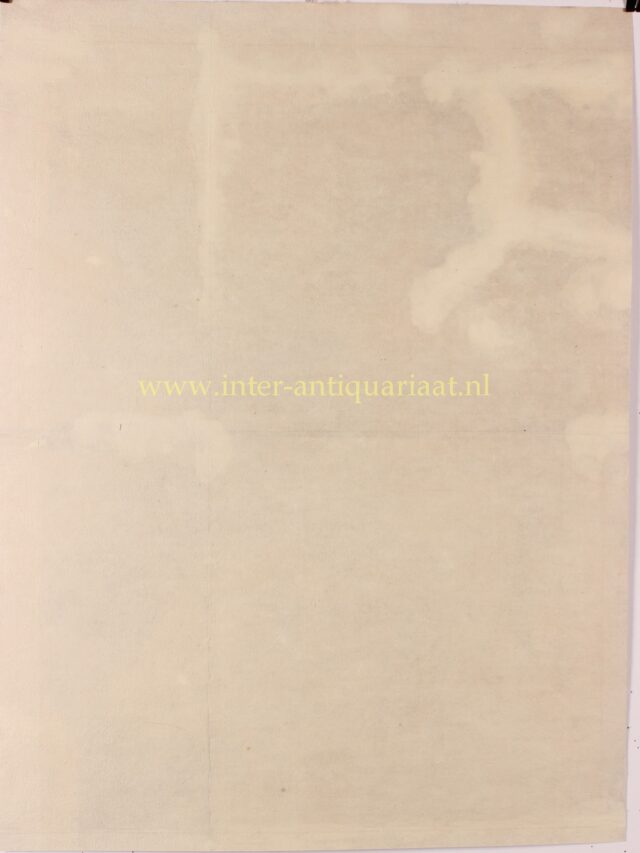 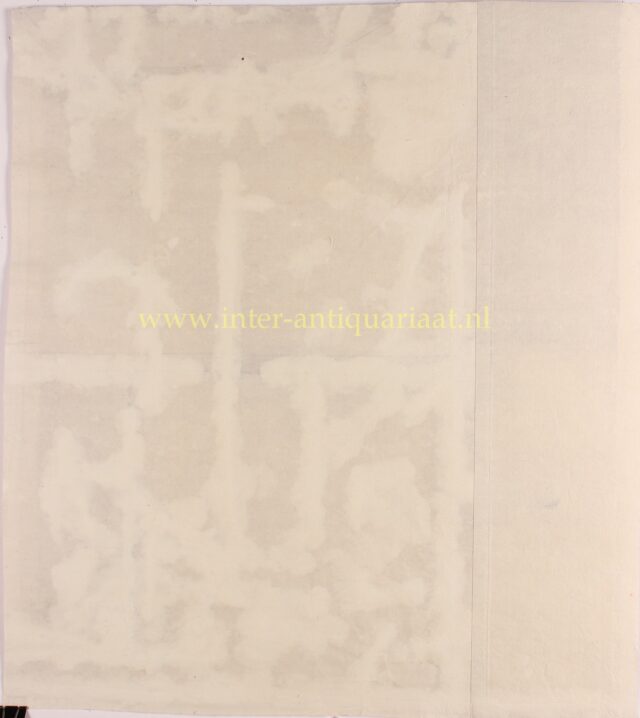 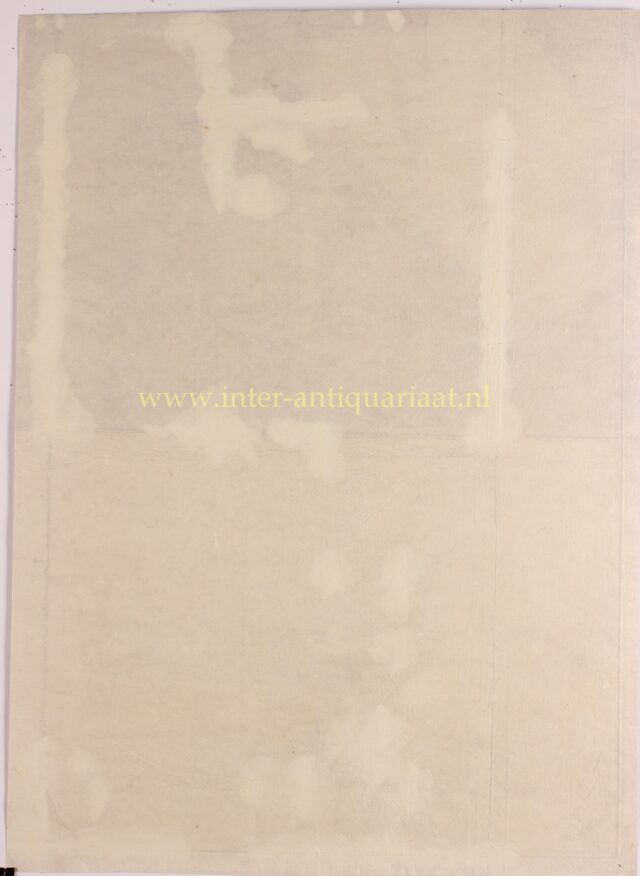 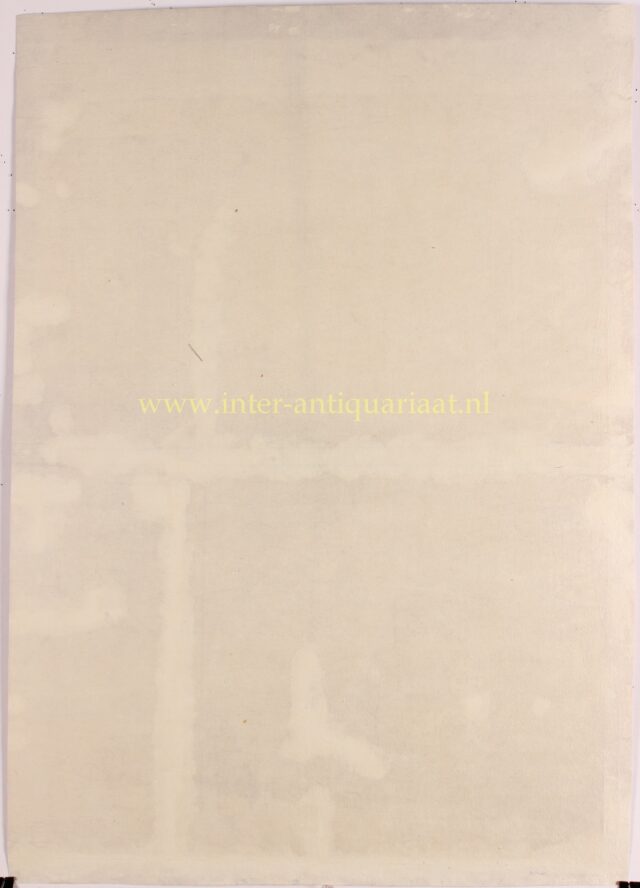 This intricately detailed and wall-sized engraving of St. Peter’s Basilica fully captures the depth and beauty of the architectural and spiritual centre of the Roman Catholic Church.

The print was made during the rule of pope Innocent XII and shows us the inside of Michelangelo’s dome of St. Peter’s Basilica towards the south transept and apse. In the centre there is St. Peter’s Baldachin by Gian Lorenzo Bernini, the large Baroque sculpted bronze canopy, over the basilica’s main altar. The baldachin is directly under the dome of the basilica, it is intended to mark the place of Saint Peter‘s tomb underneath. On top of the baldachin four angels stand at the corners.

Around the inside of the dome is written: “TV ES PETRVS ET [SVPER HANC PETRAM AEDIFICABO] ECCLESIAM MEAM. ET TIBI DABO CLAVES REGNI CAELORVM” [“You are Peter, and on this rock I will build my church. And I will give you the keys of the kingdom of heaven.”]

Set in niches within the piers supporting the dome, are statues of (on the right) Saint Helena holding the True Cross, the Apostle Andrew (on the left) and (behind St. Peter’s Baldachin) Saint Veronica.

St. Peter’s Basilica in Rome is considered the greatest of all churches of the Christian world. This impressive six sheet engraving proves it really is.

Johann Ulrich Kraus (1655–1719) was born to a widely dispersed family of artists and artisans. He was a student of Melchior Küsel (1626- ca.1683), who was in turn a student of Matthäus Merian the Elder. Kraus became a partner in the Augsburg publishing company of Melchior Küsel, whose daughter Johanna Sibylla he married in 1685. Kraus became one of the most successful and respected engravers and publishers of his generation in Augsburg.

The imperial folio print (mentioned by Thieme/Becker vol. XXI, p.442) has numerous restorations but is a stunning piece nevertheless and of great rarity.