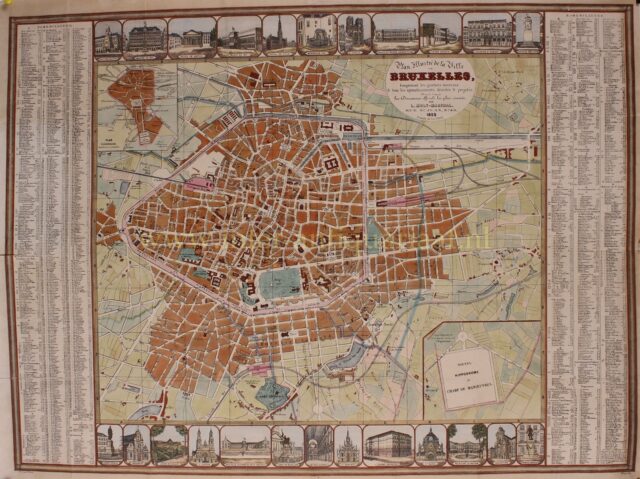 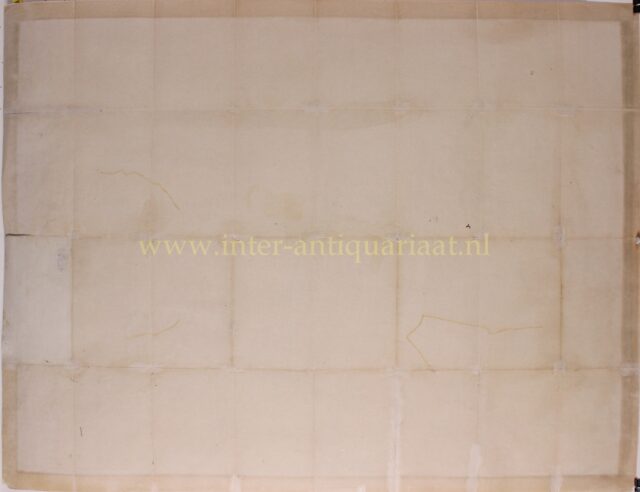 ILLUSTRATED MAP OF BRUSSELS – CAPITAL OF A YOUNG BELGIUM

“Plan illustré de la ville de Bruxelles, comprenant les quartiers nouveaux & tous les agrandissements décrétés & projetés” [Illustrated map of the city of Brussels, including the new districts and all decreed and planned extensions], lithograph made by Louis Floren in 1858 on the basis of the design by Louis Mols-Marchal. Coloured by a later hand. Size: 50 x 68 cm.

Following Belgian independence in 1830, Brussels underwent many changes. It became a financial centre, thanks to the dozens of companies launched by the Société Générale de Belgique. The Industrial Revolution and the opening of the Brussels–Charleroi Canal in 1832 brought prosperity to the city through commerce and manufacturing. The Free University of Brussels was established in 1834 and Saint-Louis University in 1858. In 1835, the first passenger railway built outside England linked the municipality of Molenbeek-Saint-Jean with Mechelen.

In 1844, the construction of the North railway station started at Place Charles Rogier. In 1847 a new warehouse was opened with better connections to the new railways. In 1853, the Leopold Quarter and Quartier des Squares were annexed with the eastern extension of Brussels, and in 1864 Avenue Louise and the Bois de la Cambre (municipality of Ixelles) followed in the southern extension of Brussels.

The railway lines and its stations in Brussels, which were so important for the development of Belgium, are clearly shown on the map: Brussels-Luxembourg station, Brussels-North station and Brussels-Allée-Verte station (“station des marchandises”), as well as Bruxelles-Midi.

The map is surrounded with images of places and buildings that the young nation was proud of: the Place des Martyrs with its Pro Patria monument as a tribute to the fallen during the Belgian Revolution, the Maison du Roi on the Grand-Place, the old palace of Justice (demolished in 1892), the Royal Palace, the Town Hall on the Grand-Place, Manneken Pis, the Cathedral of St. Michael and St. Gudula, the palace of the Prince of Orange (the current Palais des Académies), the Grand Hospice/Hospice Pachéco, the covered Saint-Hubert galleries, the statue of the French general Belliard who played an important role in the establishment of the Belgian monarchy, the statue of Brussels born Andreas Vesalius one of the founders of human anatomy, the church of Saint John the Baptist at the Béguinage, the Botanical Garden laid out in 1826, Saint-Joseph’s Church, the Petit Chateaux barracks, the statue of Godfrey of Bouillon on the Place Royal the first equestrian statue to adorn Brussels (1848), the interior of the Galerie du Roi, the church of Saint-Boniface in Ixelles built in 1849, the second warehouse, Saint Mary’s Church in Schaerbeek which was consecrated in 1853, the Pailas de Nation, the temple of the Augustinians (demolished in 1893) and the statue of Prince Charles of Lorraine (former governor of the Southern Netherlands) on the Place Royale.