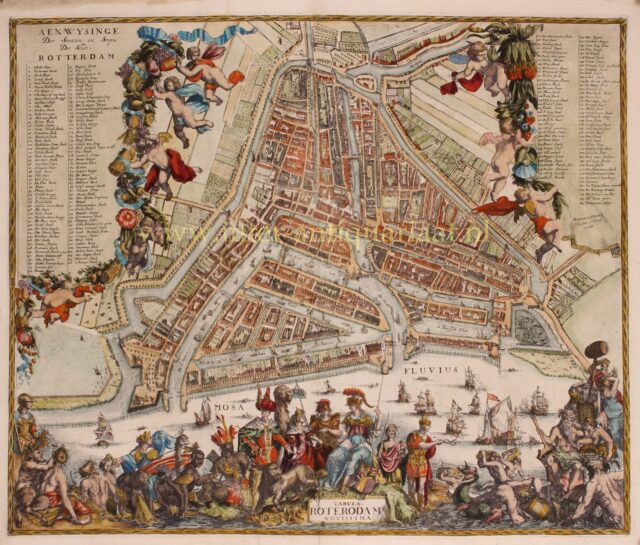 The map shows us Rotterdam on a scale of approximately 1: 5000. Each house, bridge, windmill, church, etc. is shown in great detail. There are about twenty boats and ships in the Maas in front of the city, and many more in the wide canals. The gardens, fields and scattered houses and windmills just outside the surrounding city moat are also depicted.

The map was made around 1689 by the Amsterdam artist and engraver Adriaen Schoonebeek. He had learned his skills from Romeijn de Hooghe and was undoubtedly responsible for the beautiful etched decorations, entirely in the style of his master. Jacob Allard published the map in its second state, but it was his older brother Carel Allard who extensively updated it when he published our third state.

The legends on both sides are lined with putti, flowers and a rich harvest. Under the City Triangle there is a rich allegorical decoration. In the middle the city maiden bears a spear and Rotterdam coat of arms, Mercury indicates the commercial spirit of the city, Neptune indicates its location on the water; Minerva the goddess of wisdom carries a spear with a banner and “SPQR” [the senate and people of Rotterdam]; an Ottoman with a camel, an Indian, a lion, an African with an ostrich indicate relations with all corners of the world; the satyr seducing the river nymph (far left) and the Horn of Plenty indicate prosperity; and the Maas also produces fish.

Despite the extensive legends, that give the impression of reliability, the map does not provide up-to-date information. As often the case, the engraver used an older copper plate from around 1677 for this issue of the city map. He decorated the map, added new numbers to the legend and finally gave the map his name and address.