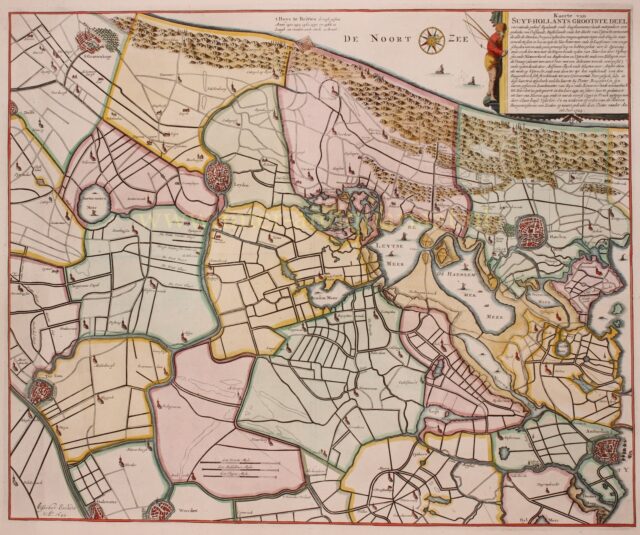 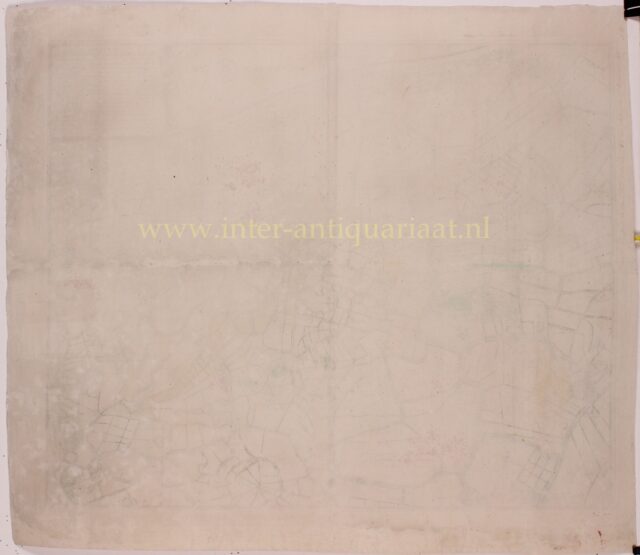 “Kaerte van Suyt-Hollants grootste deel vervatende geheel Rijnlandt ende Suytkennemerlandt mitsgaders een gedeelte van Delflandt, Amstellandt en het Sticht van Uytrecht, vertoonende al de steeden, dorpen, casteelen.” [Map of the largest part of Zuid Holland comprising the entire Rijnland and Zuid Kennemerland with a part of Delfland, Amstelland and the Prince-Bishopric of Utrecht, showing all the towns, villages, castles…] Copper engraving made by Claes Jansz. Visscher in 1644 after the design of Pieter Bruynsen of 1591 (Bruynsen in turn, based his work on a map made in 1531) and reprinted by Pieter van der Aa in 1724. Coloured by a later hand. Size: 48 x 58 cm.

The explanation at the top right of this 16th-century map describes how in the past the Haarlemmermeer and Leidsemeer were not connected to each other. When Claes Jansz. Visscher published his map in 1644, the lakes had been connected for some time and one could now see how much land had been swallowed by the water. With some melancholy it states that in the past “one could ride his wagon from Haarlem through Vijfhuisen and Nieuwekerk to Amsterdam and Utrecht”.

There were plans in the 17th century to drain the lakes, but there was strong opposition. Leiden for example, did not want to lose its lucrative fishing rights and Haarlem opposed because it earned a lot with shipping through the swampy lands. In addition, there was a lack of resources and there was little confidence in the technical feasibility of a reclamation on this scale. With reprinting the map in 1724, the mayors of Leiden wanted to draw attention to the issue once again.

Only when the water was pushed up to the boundaries Amsterdam at the end of 1836, King William I decided that the land had to be reclaimed. That finally happened with steam power in 1848-1852.