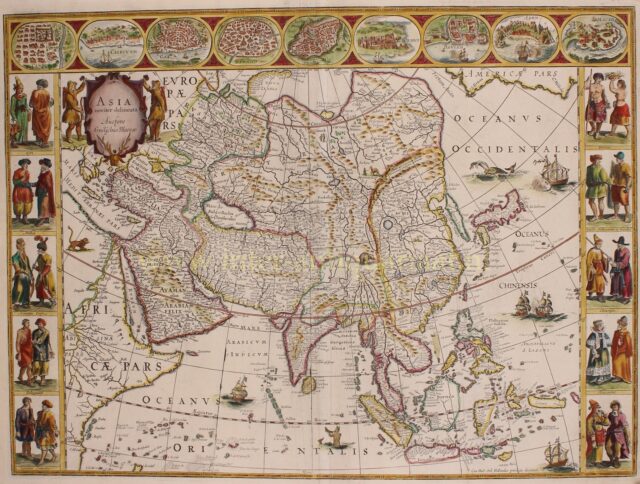 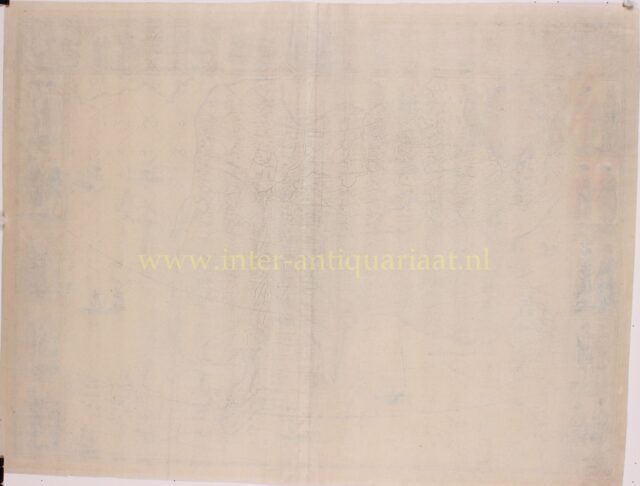 This map belongs to a set of maps of the four continents of which the map of Europe is dated 1617. The maps are reproductions of Blaeu’s 1608 wall maps.

The map is framed on both sides by five costumed Asia figures, meant to exemplify the dress and customs of Asian cultures, are representative of the highly decorative style of seventeenth century maps. On the left: Syrians, Arabs, Armenians, Persians, people from Balaghat (India) and inhabitants from the island of Sumatra. The right border shows people from Java, people from the Moluccas and Banda islands, Chinese, Moscovians and Tartars. Along the upper edge runs a decorative border with nine Asian towns in oval frames: Kandy (Ceylon), Calcutta (Bengal/India), Goa (India), Damascus, Jerusalem, Hormuz (Persia), Bantam (Java/Indonesia) and Aden (Persia).

Blaeu’s geography was most up to date for its time, thanks in large part to his access to Dutch East India Company (VOC) charts, but a few features are still notable for their surprising appearances to the modern eye. Korea is shown as an island just barely unconnected to the Asian mainland, while Japan is oddly projected in a horizontal style that was typical to this period. The coast north of Korea is only roughly drawn, as it had not been surveyed in detail. To the south, large portions of the Borneo coastline and other parts of the islands in Southeast Asia are incomplete or highly inaccurate.

Separating North America (“America Pars”) and Asia is the “Fretium Anian”, or the Strait of Anian. This was a representation of the much-hoped-for Northwest Passage, a still-undiscovered navigable water passage from Europe north to the Pacific. Anian derives from Ania, a Chinese province on a large gulf mentioned in Marco Polo’s travels. The gulf Polo described was actually the Gulf of Tonkin, but the province’s description was transposed from Vietnam to the northwest coast of North America. It appeared on maps until the mid-eighteenth century.

As if to underline the fanciful nature of unknown borders and wandering islands, the map includes many embellishments. Several ships patrol the waters, with two large ships locked in battle to the east of the Philippines. Another fires a broadside at a whale in the northeast of the map. West of Sumatra, a merman blows on a conch shell.

On land, a lion watches over the entire scene from the interior of eastern Africa. The Great Wall of China is drawn in detail, with a camel nearby. An elephant marches purposefully near the Chismay Lake, said to be the source of the Ganges.

Although the map shows all of Asia, of especial importance are the islands of Southeast Asia: Borneo, Sumatra, Java, Celebes, the Moluccas, and others. The Moluccas were the vaunted Spice Islands, originally the only source in the world for nutmeg, mace, and cloves.

This is a map that appeals both to a sense of cartographic history and to an aesthetic sense of beauty. This is a cornerstone, folio-size map of Asia and is one of the better known, more decorative maps of Asia of the 17th century.

Willem Janszoon, or Willem Jansz Blaeu (1571-1638) as he is more commonly known, was one of the most noted Dutch cartographers and map publisher of the 17th century. Blaeu’s maps are “esteemed by collectors for their decorative quality, historical importance, and as the highest expression of Dutch cartographic art during the period of its supremacy” (Tooley, p 28).

After preparation as a pupil of the great Danish astronomer Tycho Brahe, Blaeu initially concentrated on globe making and separately published maps, including wall maps of the continents. From 1608, he dominated the market for sea atlases and in 1630 produced his terrestrial atlas. These atlases were continued by his sons, culminating in the great Atlas Maior of 1662 in 11 volumes with subsequent editions.