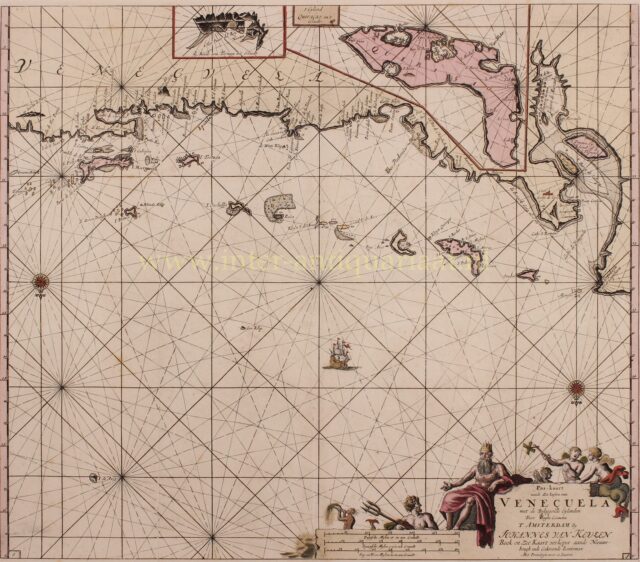 RARE CHART OF THE COAST OF VENEZUELA AND THE LEEWARD ANTILLES

The chart show us the coast of Venezuela with the Leeward Islands, with inset maps of islands of Tortuga and Curaçao.

From the end of the 16th century, Dutch ships sailed to the coast of Venezuela in search of salt. At that time salt was an important product, certainly for the Dutch Republic, which owed its prosperity to a large extent to the herring fishery (and herring was preserved with salt). When Spain occupied Portugal in 1580 during the Eighty Years’ War, it became increasingly difficult for Dutch merchants to obtain high-quality salt from Portugal. The discovery of the salt pans of Punta de Araya (marked on the map), a peninsula located between the city of Cumana and Isla Margarita, made it very attractive for Dutch traders to set foot there themselves. Before the arrival of the Dutch, the peninsula was already exploited by the Spanish, but more for  pearls than for salt. It did not take long before the Dutch also had problems with the Spanish here.

After the conquest of the Venezuelan salt pans of Punta de Araya by the Spaniards, where the Dutch obtained salt, they had to focus on new places to extract salt. This was to become the nearby island of La Tortuga. The Dutch first arrived there in 1630, where over time they built a fortification of earth and wood to protect the island from regular attacks by the Spaniards. As the battles continued, the salt pans and the fortress were destroyed several times by both parties.

In August 1634 the Dutch attacked Curaçao. This gave the Dutch West India Company (WIC) a base for trade and privateering. Curaçao was favourable loacted with respect to the Spanish colonies on the mainland. It also had the best natural harbor hitherto known in the Caribbean. After conquering the island, the WIC consolidated its claims by building fortifications. One of the first was Fort Amsterdam built to protect the wells on the northeast side of the Schottegat.

As god of the sea, Neptune with a number of mermen adorn the cartouche at the bottom right .