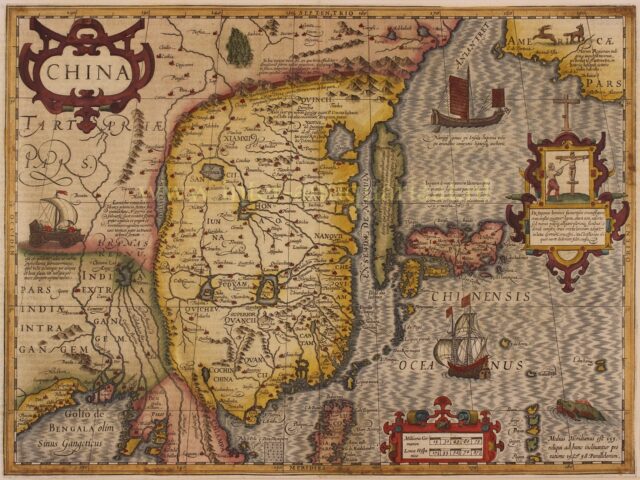 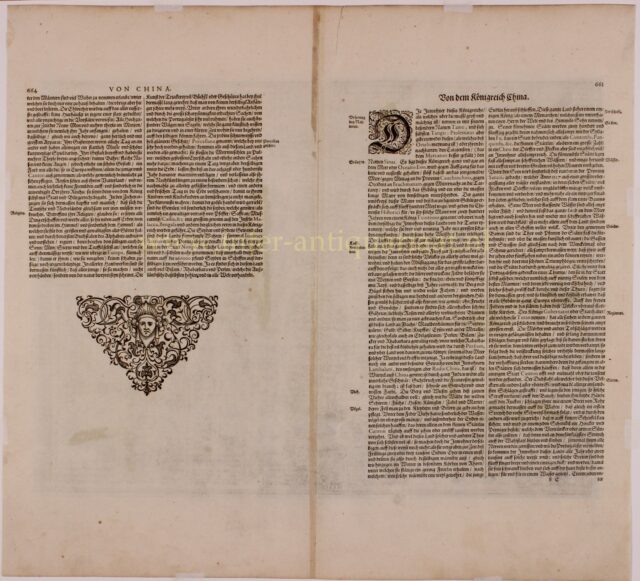 ONE OF THE MOST SOUGHT AFTER MAPS OF CHINA

Of the lands in the Far East, China was seen as the wealthiest and most mysterious and the Jesuit missionairies were among the first to make the dangerous journey.

Geographically the map is an interesting array of fact and fiction. The map contains rudimentary geographical information, as there was very little actually known of the region during the early part of the seventeenth century. The two most prominent features of this survey are the portrayal of the peninsula of Korea and the charming illustration China’s great wall ((400 leagues in lenght, it protects the Chinese empire against the tartares), a wonder of both ancient and modern worlds. There is also a note porporting to be the location of “where the emperor of China has his seat”. Despite the odd elongation of the country, there are attemps to show various provinces, and several great cities are marked. The interior of China is dominated by several large lakes and the mythical “Chiamai Lacus” forms the headwaters of five large rivers in northeastern India. The northwest coastline of America appears in the upper top corner with a notation that refers to (again) the Tartar hordes (and the deer and wolves) that inhabit the region.

As ever in these early maps seamonsters stalk unwary ships and Hondius shows a European merchant sailing on what is labeled as “Chinensis Oceanus“. This ocean is portrayed with an elaborate and beautiful pattern which attempts to portray the movement of the waves. The islands of Japan also feature on this beautiful map, together with the portrayal of how a Japanese ‘criminal’ is tied (ie not nailed) to a cross and is speared by a European for killing Christians. The persistance of the Jesuits wanting to spread Christianity in Japan, ultimately led to the fact that foreigners were driven out and from 1616 foreign trade (with the exception of China) was limited to the ports of Hirado and Nagasaki. (Where the Dutch – who were not missionaries, but traders – were the only ones to do business with Japan for more than two centuries.)

On the left of the map is a land yacht (as is often the case on early depictions of China), with the note that the Chinese are an inventive people and that they had fabricated a wagon that could sail on the wind across the plains. Marco Polo swore were they in common use at the time.

Jodocus Hondius (1563-1612) was the founder of the famous 17th century Dutch map publishing family. Hondius, along with sons Jodocus II and Henricus and son-in-law Jan Janssonius, was prominent in Dutch cartography and competed with the emerging Blaeu family map business.

When Jodocus Hondius acquired the copperplates of Gerard Mercator’s atlas, he prepared this map for inclusion in his Atlas sive Cosmographicae…, first published in 1606. This map is from the German edition dated 1633.