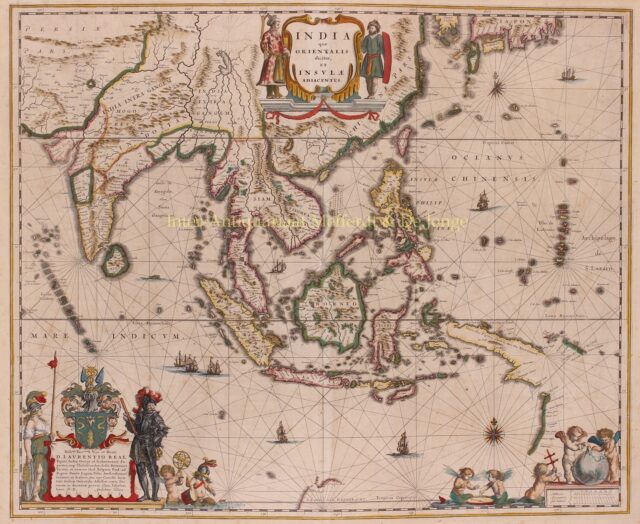 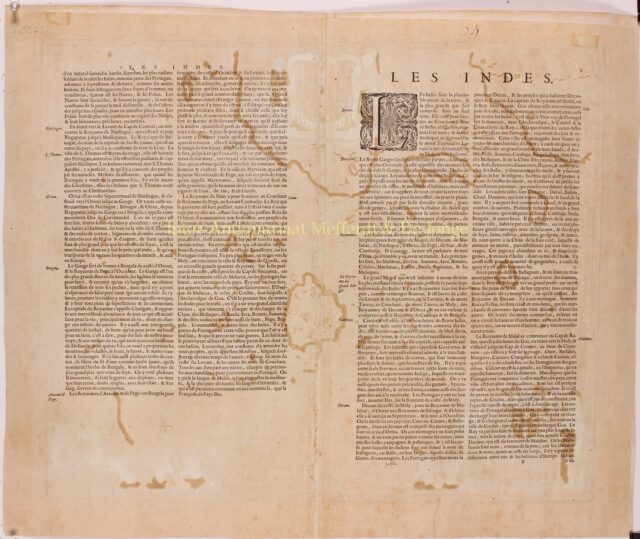 A most important map stretching from India to Japan, and one of the first printed maps to show parts of Australia as discovered by the Dutch between 1606 and 1623, before the expeditions of Abel Tasman.

The relatively-straight lines of the archipelagos of the Maldives and the “Islas de Ladrones” (Marianas) act as bookends to the map’s geography. Japan is shown horizontally, a common depiction in this period, and is far north, east of the Korean peninsula. Sri Lanka, or “Ceilon” as it is labelled here, is shown as round and quite large.

Decorations abound across the map. The waters are criss-crossed with rhumb lines radiating from sixteen-point compass roses. Four lone ships sail the seas to the east and the south. A flotilla of three ships approach the Sunda Strait, while a sea monster surfaces near Sri Lanka. The title is guarded in its cartouche by an Asian man in a turban who is looking at a European man with a shield.

In the lower left is another elaborate cartouche which holds a dedication to Laurens Reael, Governor-General of the VOC (Dutch East India Company) in Batavia 1615-1619. Reael had fought the Spanish in 1617 in the Bay of Manila, the English at Bantam and in the Moluccas, and the Mataram Sultanate at Japara on Java. The dedication is signed by Blaeu and is guarded on the left by Athena, the Greek Goddess and symbol of wisdom, courage, inspiration, civilization, law and justice, mathematics, strength, just warfare, strategy, the arts, crafts, and skill. On the right is an armoured knight, to emphasize the Dutch military strength, firmness and determination. Next to the cartouche are two cherubs, one holding an armillary sphere aloft while the other beats a drum.

The cherubs have more angelic companions in the lower right corner. Two are contemplating a compass and another brings a Jacob’s staff to two others studying a globe with a pair of dividers. The globe rests atop the scale of the map.

As the official cartographer to the VOC Blaeu had access to the most up-to-date information, although he is known to have supressed knowledge of Australia for thirty years. The map is said to be “one of the most detailed images of the sphere of operations and Asian trading empire of the Dutch East India Company”.

Willem Janszoon Blaeu (1571-1638) was the founder of the famous Blaeu cartographic firm of Amsterdam. Blaeu studied astronomy and sciences with Tycho Brahe, and in 1599 established a globe and instrument making business which soon expanded to include cartographic and geographic publishing. This firm was to go on to become the largest and most important cartographic publishing firm in the world, run by his sons Cornelis (until his death in 1642) and Joan. The maps issued by the Blaeu firm are known for their fine craftsmanship and design, and have been called “the highest expression of Dutch cartographical art.”