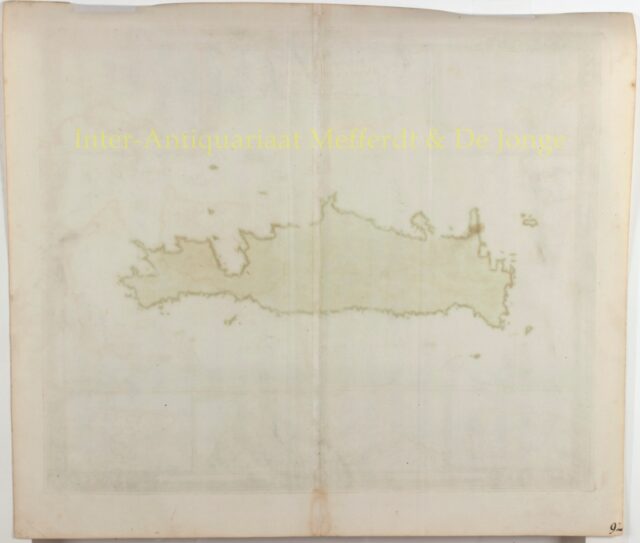 One of the most decorative maps of Crete, based on the map by Sébastian de Pontault Beaulieu, a French military engineer who had mapped the fortifications of many Mediterranean islands. His map of Crete was published in 1674, only five years after Crete had fallen to the Ottomans after a 21-year siege (the longest siege in history).

The Siege of Candia [modern Heraklion], the capital of Crete, was the central event of the sixth Turkish-Venetian War, better known as Cretan War, or War of Candia. It was a conflict between the Republic of Venice and her allies (the Knights of Malta, the Papal States, French volunteers, and pirates from Mani) against the Ottoman Empire and the Barbary States, fought over the Venetian possession of Crete. The war lasted from 1645 to 1669, and was fought in Dalmatia, Crete, and in numerous naval engagements in the Aegean Sea.

On the map the seas around the island are filled with galleons and galleys representing this epic struggle. Above the map the title is on a banner held aloft by putti, and the corners have plans of the towns and fortifications of Chania and Heraklion. Under the map are plans of the fortifications of Spinalonga, Rethymno, Tylissos [Thine] and Suda.