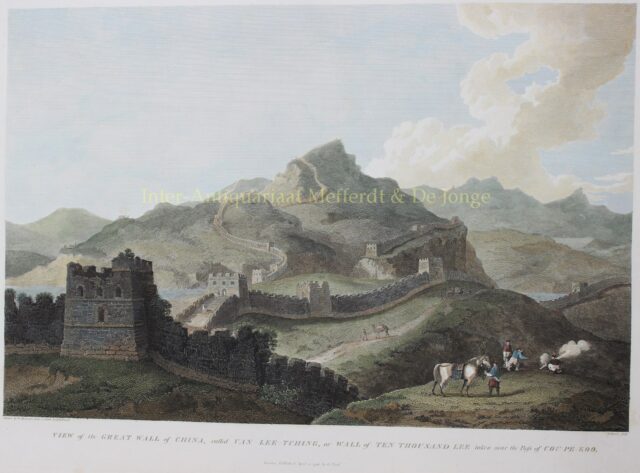 “View of the Great Wall of China, called Van-Lee-Tching, or Wall of Ten Thousand Lee taken near the Pass of Cou-Pr-Koo.” Copper engraving by P. Medland after a drawing by William Alexander (1767-1816) from the “Authentic account of an embassy from the King of Great Britain to the Emperor of China; including cursory observations made, and information obtained, in travelling through that ancient empire” written by Sir George Leonard Staunton and published April 12, 1796 in London by G. Nicol. Coloured by a later hand. Size (image): 30 x 45 cm.

The embassy was headed by Earl George Macartney (1737-1806), who was dispatched to Beijing in 1792. He was accompanied by Staunton a medical doctor as his secretary, and a retinue of suitably impressive size, including Staunton’s 11-year-old son who was nominally the ambassador’s page. On the embassy’s arrival in China it emerged that the 11-year-old was the only European member of the embassy able to speak Mandarin, and thus the only one able to converse with the Emperor. Macartney was twice granted an audience with the Emperor and in December 1793 he was sumptuously entertained by the Chinese viceroy in Canton.

Staunton describes this particular engraving as follows: “A view of part of the great wall of China called by the natives Van-lee-ching or wall of ten thousand lee, taken near the pass of Cou-pe-koo. At this place the wall is carried over the summits of the highest mountains, some of which are not less than three thousand feet in perpendicular height, and appear to be almost inaccessible. Some of the towers are in ruins, as that in the fore-ground of the view; but others which more immediately command the passes, are kept in good repair. This wall, according to the charts of the empire made from actual surveys, is more than fifteen hundred miles in length, and in many places it is double, and even triple, for the better defence of the passes. The masonry and brickwork in the towers alone exceed those of all London.”