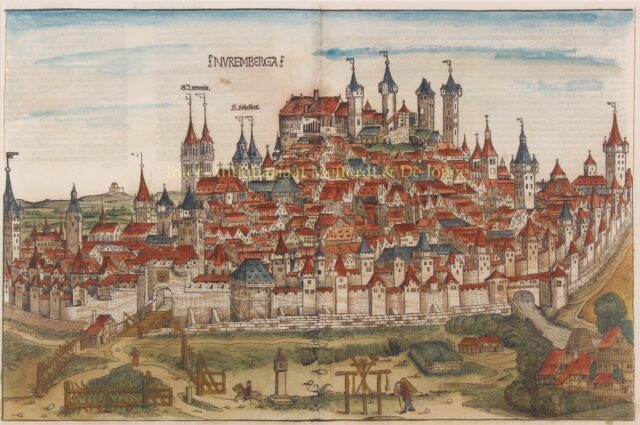 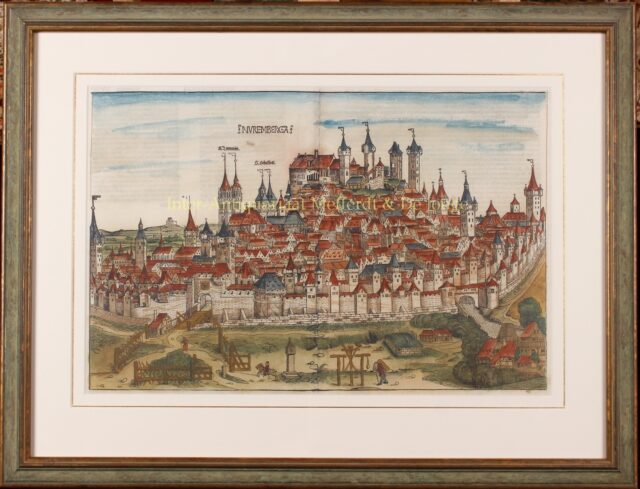 NUREMBERG AT ITS HEYDAY

The Imperial City of Nuremberg (German: “Reichsstadt Nürnberg”) was a free imperial city — independent city-state — within the Holy Roman Empire. After Nuremberg gained piecemeal independence from the Burgraviate of Nuremberg in the High Middle Ages and considerable territory from Bavaria in the Landshut War of Succession, it grew to become one of the largest and most important Imperial cities, the unofficial capital of the German Empire.

The cultural flowering of Nuremberg, starting in the 15th century, made it the centre of the German Renaissance. Nuremberg traded in virtually all of the then-known world and its wealth was known as ‘the Imperial Treasure Chest’. The city’s revenues were said to have been greater than those of the whole kingdom of Bohemia. Nuremberg maintained trade offices in many cities, such as the Nürnberger Hof in Frankfurt.

The depiction of Nuremberg is the only two-page, text-free spread of a town in the book. Clearly, not all town views were accurately portrayed, but Nuremberg’s importance as an imperial city, with a vibrant merchant and intellectual class, was realistically shown, from the labelled spires of the churches of St. Sebaldus and St. Lorenz to the many other architectural features such as the castle (one of Europe’s most formidable medieval fortifications), towers, city gate, and bridge, as well as the paper mill in the bottom right corner.