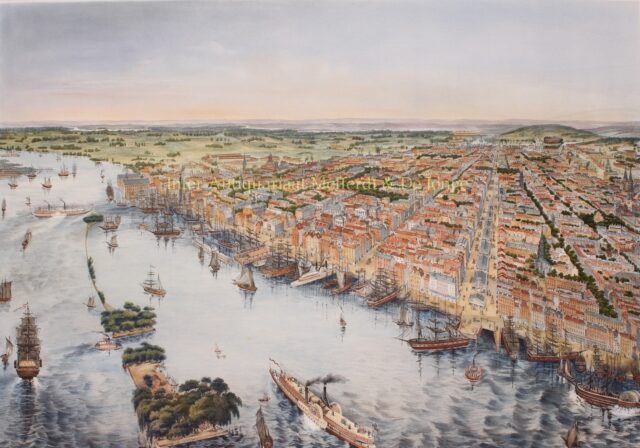 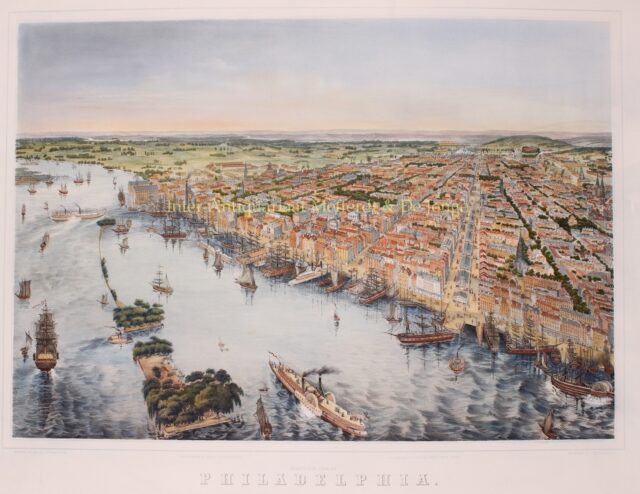 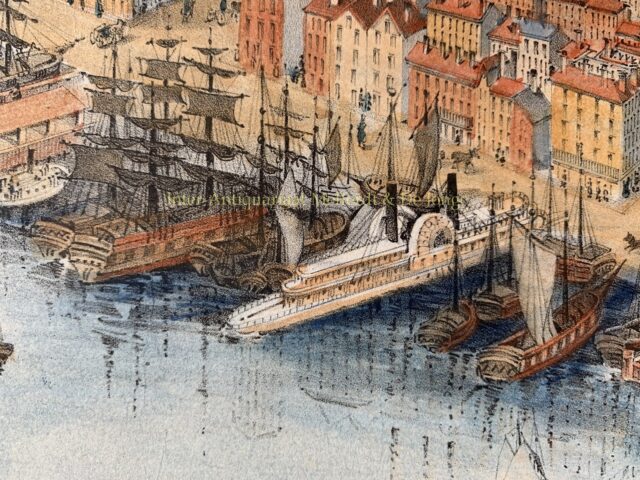 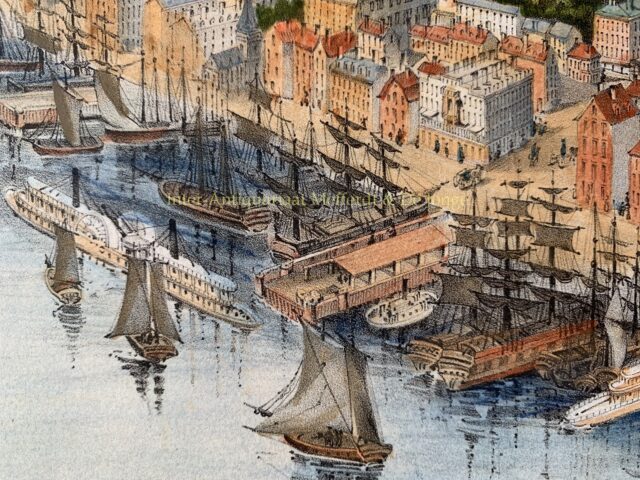 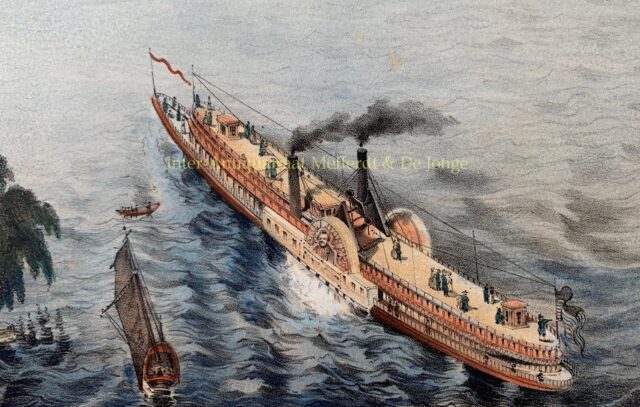 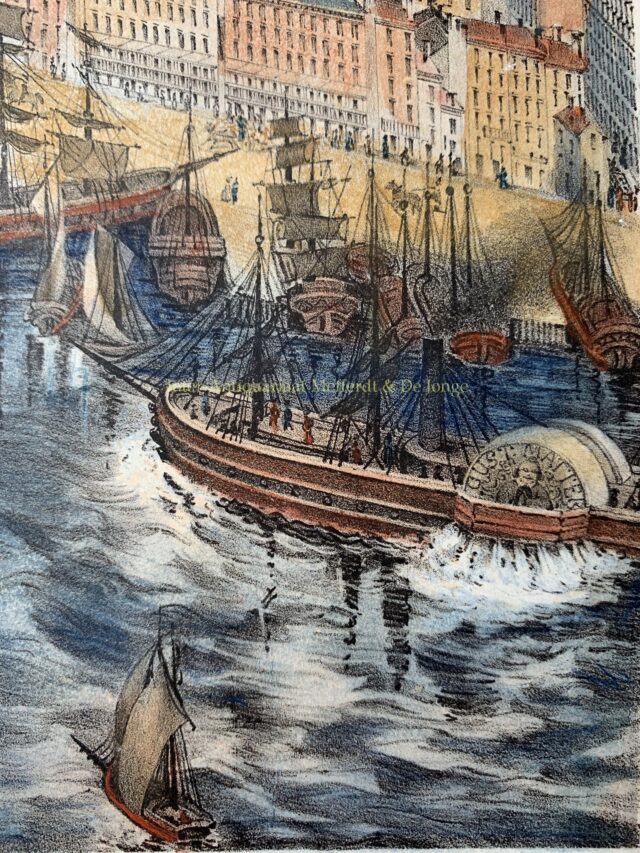 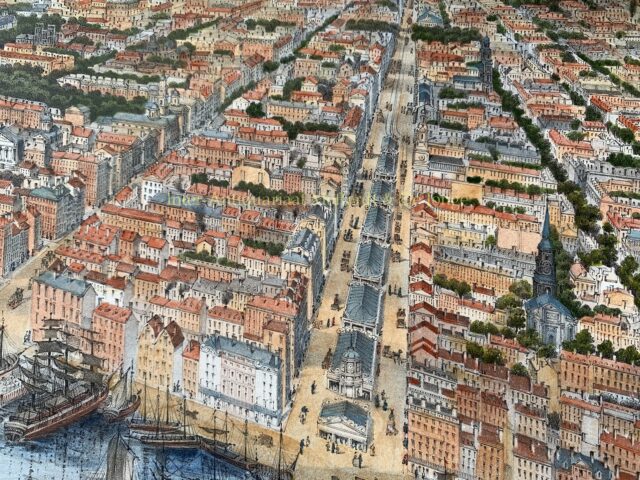 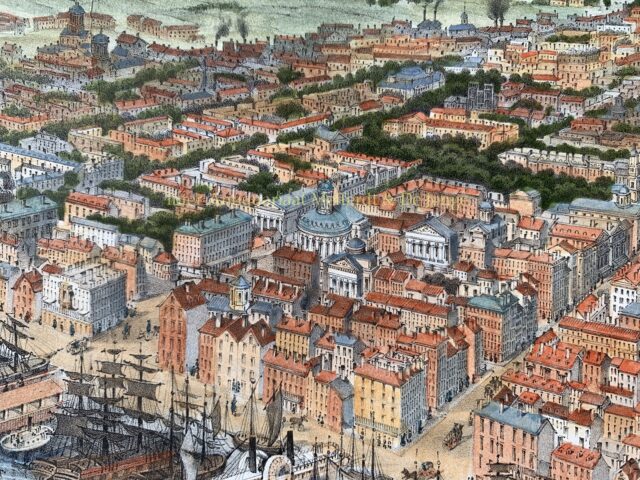 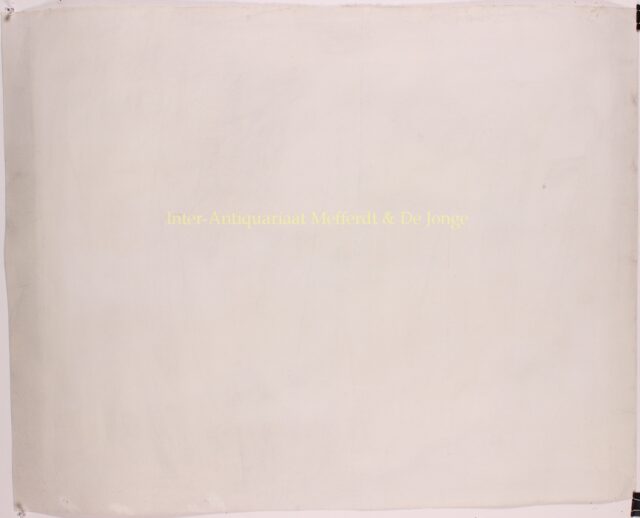 The bird’s eye view perspective dates back to the early Renaissance with reference to its technique being made as far back as Roman times.  In Europe, the bird’s eye view print surged in popularity in the late eighteenth century and “balloon views” became popular in the 1830s and 1840s. Although the 19th century bird’s eye co-existed with early photography and the hot air balloon, most of their designs were based on mathematical formulas and numerous sketches made on the ground. Thus a bird’s eye view may be seen as a visual blend of fantasy and historical fact.

This lithograph portrays Philadelphia as a modern, industrial city with smoking chimneys and steam-paddle wheelers.

The view is looking west from the Delaware River predominately showing the built city to the Schuylkill River between Center City and South Philadelphia. Market Street runs down the center, right of the view. It shows the residential, commercial, industrial, religious, educational, and cultural buildings lining the streets and outer lying area south of Center City. Also parts of Windmill Island (a well known pleasure spot of the day) in the foreground can be seen and West Philadelphia in the background. It includes the Navy Yard, Sparks Shot Tower, Moyamensing Prison, Independence Hall, Market sheds lining several blocks of Market Street, Christ Church, and Fairmount neighborhood. Also the five major squares (as well as Independence Square) are shown. Docked ships line the piers along the Delaware and vessels sail on the river. The paddle wheel on the bottom boat bears the name and portrait of the publisher “J.U. Locher”, the paddle steamer on the very right shows “Gust. Matter”,  the artist that made the lithograph.

Literature: John William Reps “Views and viewmakers of urban America: lithographs of towns and cities in the United States and Canada” (1984), no. 3585.