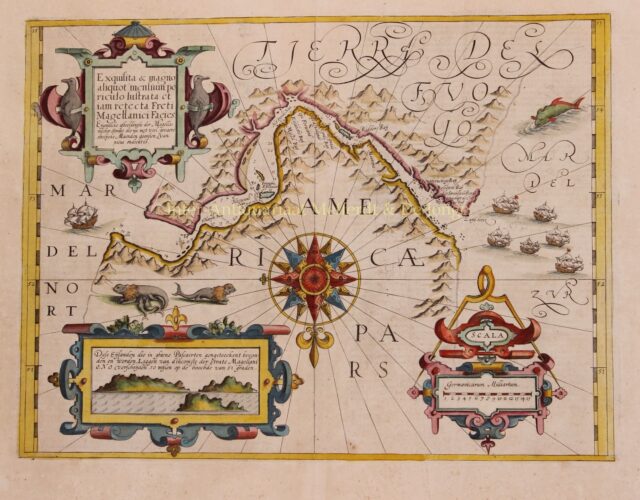 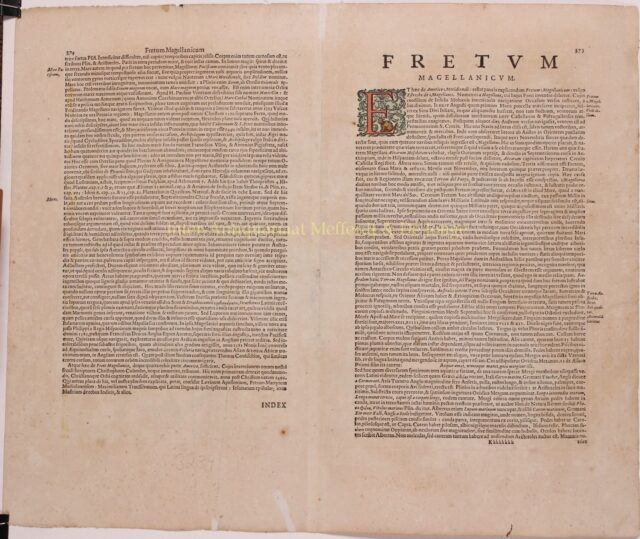 Mercator’s map is the earliest map of the Strait of Magellan to appear in a commercial atlas. It is also a rare example of a Mercator sea chart, employing the style of Lucas Waghenaer’s work, including a profile view and soundings.

Centred on an exquisite compass rose, this map bears a southern projection with North pointing towards the bottom of the map. While the Strait of Magellan is the focus of the map, one must note the southern land titled “Terra Del Fuogo” is mapped with a mountainous and well defined coastline extending into the unknown southern continent. This map predates the discovery of the route around Cape Horn by Willem Schouten and Jacob Le Maire in 1616 that ultimately proved that Terra del Fuego was an island.

From end to end, the strait is marked with soundings and about place names. The lower left portion of the map features a view of the entrance to the Strait, with “islands not mentioned on any other chart”. Europeans first explored the islands during Ferdinand Magellan’s expedition of 1520; Tierra del Fuego and similar namings stem from sightings of the many bonfires that the natives built.

The geographic details were drawn from Bernardus Joannis Monasteriensis, who accompanied the first Dutch expedition to sail through the Strait in 1599-1600. That expedition is portrayed on the map by the fleet of six sailing ships in the “Mar del Zur”.

A large sea monster and a sea lion family embellish the map. The title cartouche is that of early baroque style and is flanked by two penguins. Another distance scale cartouche with Germanic miles fills the lower right.

One of the most fascinating and decorative of all regional American maps, illustrating an important period in the history of the discovery of the Americas and water routes from the Atlantic to the Pacific. This is a great piece for anyone with an interest in early exploration. For over 100 years, the Strait of Magellan was believed to be the only sure way to sail from the Atlantic to the Pacific. Not much changed when Cape Horn was circumnavigated in 1616. As countless attempts to find a Northwest Passage proved unsuccessful for hundreds of years, the Strait of Magellan continued to be used extensively until the opening of the Panama Canal in 1914.