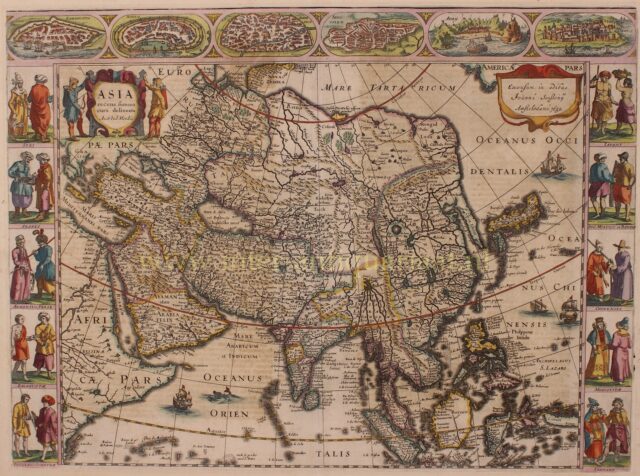 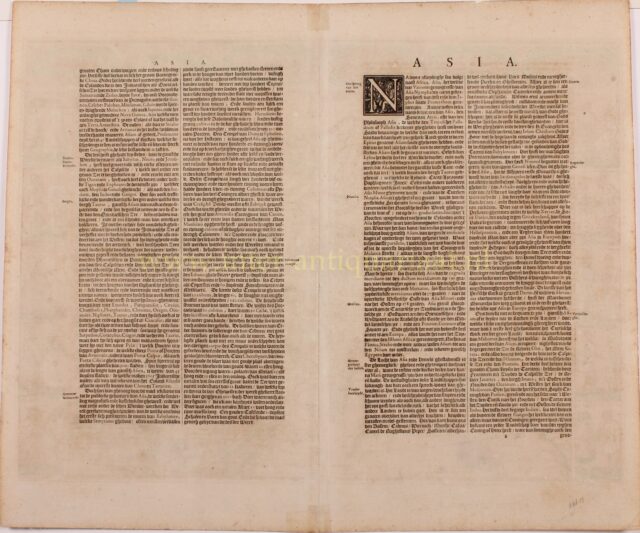 This highly attractive map embraces all of Asia. The Middle East is very well formed, although the Caspian Sea has the egg-like form it maintained on maps until the 1730s. The Arabian Peninsula is well defined, based on Portuguese sources, and India takes its form after the maps of the Dutch adventurer, Jan Huygen van Linschoten (1596), which, in turn, borrowed from Portuguese sources.  Southeast Asia and the Indonesian Archipelago are derived from charts made for the Dutch East India Company (VOC), while China is derived from Jesuit sources, although Korea is an oddly elongated peninsula. The geography of the region would remain an enigma to Europeans until the early 18th Century.  Japan’s Honshu and Kyushu are recognizable, although the area further to the northeast remains a vast mystery.

True to the carte à figures’ style, which was the hallmark of the great contemporary period of Dutch Baroque cartography, the map is surrounded on four sides by registers of fine vignettes. Along the top of the map are views of Famagusta (Cyprus), Rhodes (Greece), Damascus, Jerusalem, Aden and Hormuz (Persia).  Along the left side of the map are depictions of people in local costume including Syrians, Arabs, Armenians & Persians, Indians, and Sumatrans.  On the right side are depictions that include Javanese, Moluccans & Bandans, Chinese, Russians and Tartars. Along the bottom of the map there are further town views of Dutch trading posts Goa (India), Calcutta (Bengal/India), Kandy (Ceylon), Bantam, Gammalamme (Moluccas) and Macao. In addition the map is embellished by a fine title cartouche and ships and sea monsters in the seas.

The map was originally conceived by Jodocus Hondius the Younger (1594-1629), whose eponymous father played a large part in the rise of Amsterdam as the dominant cartographic production centre in the 17th Century. The present edition of the map is by Jan Jansson (1588-1664), who married Jodocus the Younger’s sister Elizabeth.  He transformed the Hondius firm into a powerhouse of geographical publications. Jansson most notably published the Atlas Novus (1638), and the Atlas Major (1660), the 11 volumes of which included a town atlas, a hydrographic atlas, an atlas of the ancient world, and Andreas Cellarius‘ incomparable celestial atlas.  Jansson’s works were rivalled only by those of his arch-nemesis Joan Blaeu.

The present map is one of the finest depictions of Asia from the apogee of Dutch cartography.