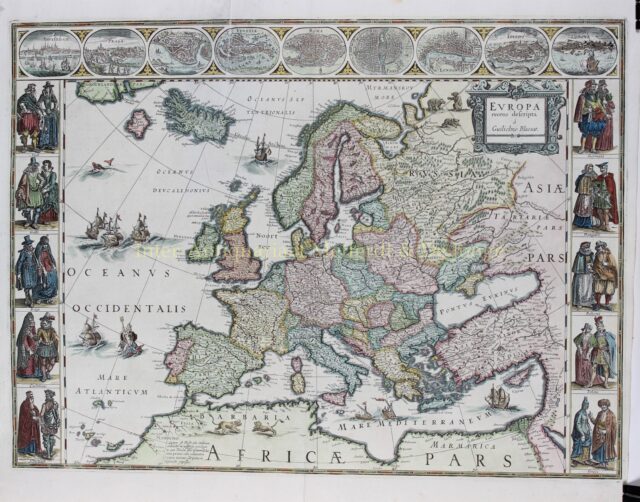 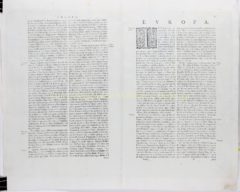 This classic map of Europe is done in the carte-a-figures style with vignettes on three sides and with Latin text on verso. Blaeu’s carte-a-figures maps were issued separately from 1617, and then used in an atlas in Blaeu’s Atlantis Appendix in 1630.

The upper frieze has nine bird’s-eye views of Amsterdam, Prague, Constantinople, Venice, Rome, Paris, London, Toledo and Lisbon. The side borders contain the costumes of the noblemen and women of ten European nations: English, French, Dutch, Castilian Spanish, Venetians, Germans, Hungarians, Bohemians, Polish, and Ottoman Greeks. The map is embellished with sailing ships, sea monsters, bears in northern Russia, and lions in North Africa and Neptune riding a dolphin and holding his trident. A beautiful map produced at the height of the Golden Age of Dutch mapmaking.

For European mapmakers their own continent contained few mysteries or secrets by the seventeenth century. However, the mythical island of Frisland still appears between Iceland and Greenland.

Blaeu’s carte-e-figures maps of the world and the four continents are some of his most desirable. Reduced versions of the set of five wall maps he published in 1608, each example features a border of vignettes of principal cities, as well as depictions of pairs of figures in the national dress of the kingdoms and peoples of each continent.

Willem Janszoon Blaeu (1571-1638) was a prominent Dutch geographer and publisher. Born the son of a herring merchant, Willem chose not fish but mathematics and astronomy for his focus. He studied with the famous Danish astronomer Tycho Brahe, with whom he practised his instrument and globe making skills. Blaeu set up shop in Amsterdam, where he sold instruments and globes, published maps, and edited the works of intellectuals like Descartes and Hugo Grotius. Willem died in 1638. He had two sons, Cornelis (1610-1648) and Joan (1596-1673). Joan trained as a lawyer, but joined his father’s business rather than practice. After his father’s death, the brothers took over their father’s shop and Joan took on his work as hydrographer to the Dutch East India Company. Later in life, Joan would modify and greatly expand his father’s Atlas novus, eventually releasing his masterpiece, the Atlas maior, between 1662 and 1672.

The Blaeu family were one of the most famous publishers of maps, globes and atlases during the seventeenth-century. The Blaeu business flourished in Amsterdam for over 40 years, until a fire destroyed their premises in 1672. They lost most of their plates, prints and stock, which effectively ruined the firm.