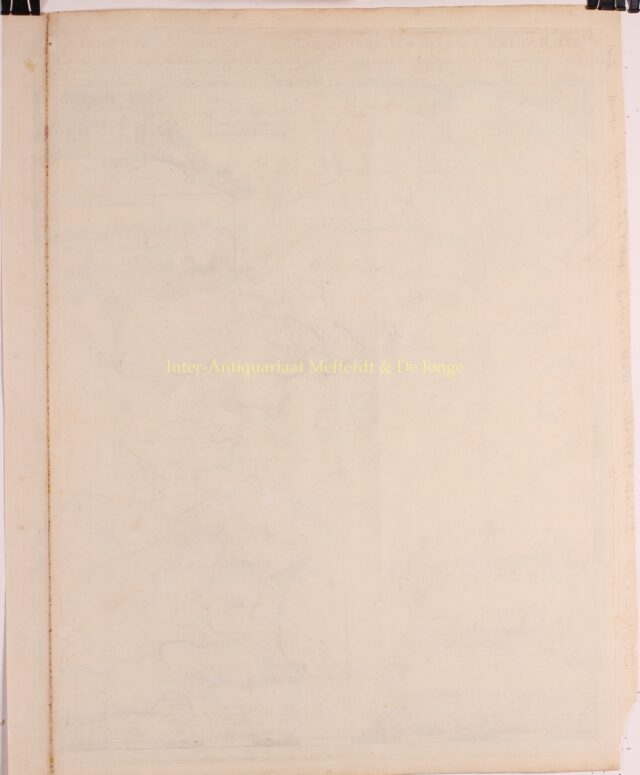 Elaborately etched and engraved chart of the French Atlantic of the coast off nowaday Charente-Maritime, extending from the Gironde Estuary in the South to the mouth of the Loire and Brittany (Bretagne) in the North, centered on the Pertuis d’Antioche strait with Îsle de Ré and La Rochelle. With a history of invading English, Îsle de Ré’s main port Saint-Martin was fortified in 1681 as a component of the belt of forts and citadels built to protect the military harbour of Rochefort (on the river Charente).

With large inset views of La Rochelle, the port Marans and the island of Oléron, along with a decorative cartouche and dedication coat of arms.

The Gironde is subject to very strong tidal currents, still today great care is needed when navigating the estuary. The lighttower of Cordouan stands at its entrance, already in 1694.

Throughout the map there is detailed navigational information, such as currents, tides, the nature of the seabed, the harbours and indications of the water depths, reefs, shoals and sandbanks.

This part of the atlas, which contains nine charts, constitutes “the most spectacular type of maritime cartography”. It was prepared for the use of William III who needed accurate information on the Channel coasts for his war plans against Louis XIV of France. In 1694 he sent an expedition to attack several of the ports which are illustrated in the etched vignettes that decorate these charts. What has won their lasting fame, however, is the identity of their author: the artist-engraver Romeijn de Hooghe (1645-1708). Since he undertook all stages of production himself, the charts exhibit a rare harmony of design and execution. The allegorical subjects which characterise his designs are here transformed into dramatic cartouches.