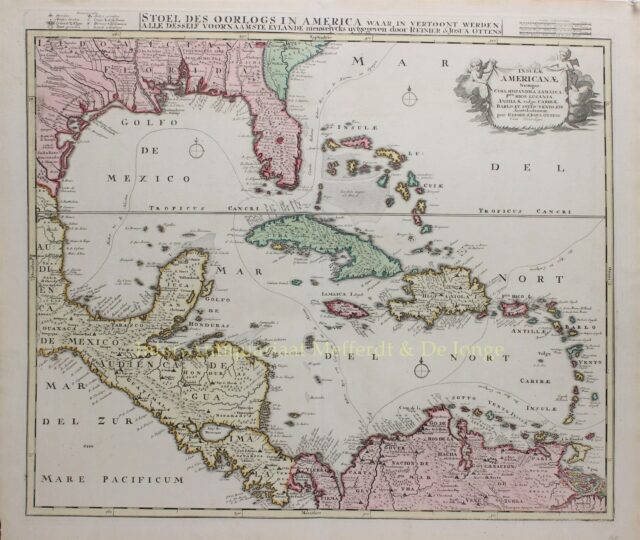 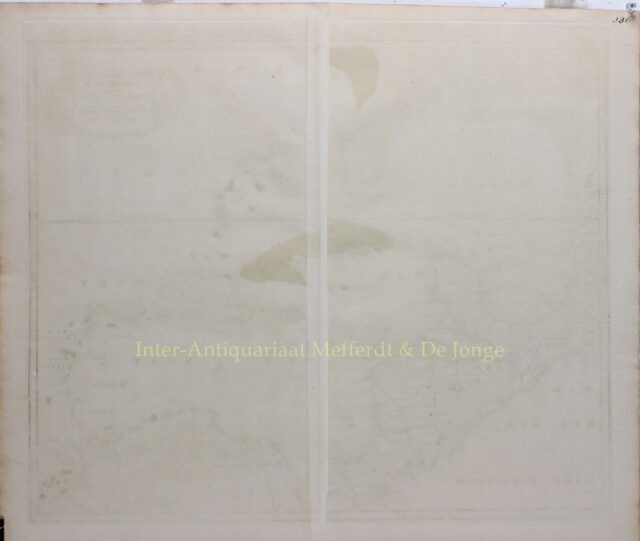 The Dutch titel “stoel des oorlogs” [area of war] refers to the original purpose of the map: to illustrate the theater of the Nine Years’ War, one of the many inter-imperial conflicts of this period.

At sea, there are several obstructions noted, which underlines how tricky it is to navigate these waters. Small islands, rocks, and sand banks are all included. Three compass roses also dot the seas. Additionally, anchor points are marked, although this map would be used mare as a reference material than as a navigational aid.

In Florida, the peninsula is called Tegesta Prov. The province of Tegesta is a Dutch convention pioneered by Hessel Gerritz, hydrographer to the Dutch East India Company and the Dutch West India Company, and Johannes de Laet. It refers to the Tegesta people, an indigenous group active near what is today Miami-Dade. The Tegesta were one of the first groups to meet Europeans, specifically the conquistadores Ponce de Leòn and Pedro Menéndez de Avilés.

The Nine Years’ War (1688-97), or the War of the Grand Alliance, is referred to as King Williams’ War in North America. As with many seventeenth and eighteenth-century conflicts, this was a war for power in Europe that spilled into colonies around the world. Louis XIV of France invaded the Holy Roman Empire in September 1688 in order to make them accept his recent territorial gains. However, the German princes resisted, forming a large coalition that included Savoy, the Spanish, the Dutch and the English. In the Caribbean, fighting focused on harassing French convoys intent on resupplying their colonies.

Of particular note on this map are the shipping routes used by the Spanish Empire, the area’s most powerful imperial power at this time. Included is the Bahamas Channel route to Havana, the route from Veracruz to Havana, Havana to Cartagena, and Cartagena to Spain. The Spanish Empire operated a closed trading system, only allowing Spanish vessels to dock at and trade with ports in their colonies. The arrival of the galleon annually or semi-annually was a major event in the port cities, triggering fairs and festivities. Of course, much illicit trade also went on, often with Spain’s enemies, the French, Dutch and English.

The Ottens brothers based this map of the West Indies on Danckerts’ map of the same title. Danckerts updated the Gulf coast and Mississippi River delta based on the important map of Guillaume Delisle, but the Florida peninsula is filled with spurious mountains.