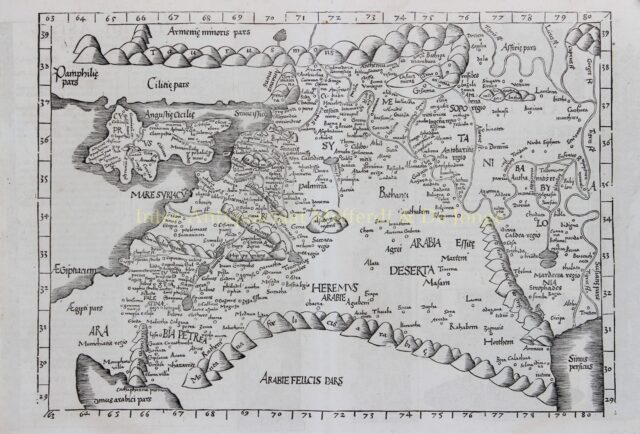 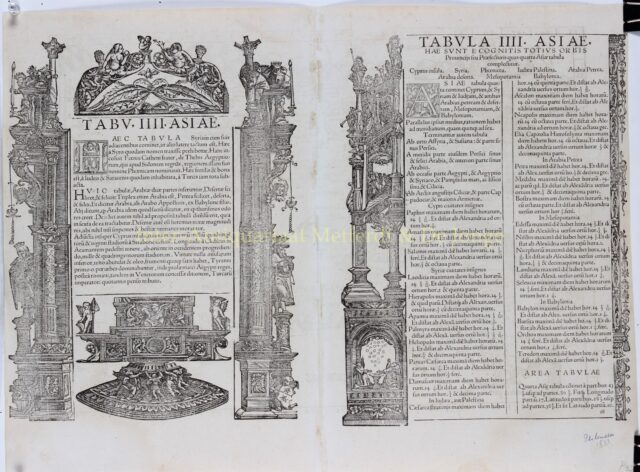 RARE MAP OF THE MIDDLE EAST

“Tabula IIII Asiae.” Woodcut made by Laurent Fries and Johannes Grüninger in 1525 for “Geographia“ by Claudius Ptolomeus, published in 1535. Verso: Latin text and a key to important locations marked on the map. Size: 32,0 x 45,5 cm.

This rare and early map depicts the region between the Mediterranean Sea and the Persian Gulf, covering Cyprus, Palestine, Holy Land, Mesopotamia, Babylonia, Arabia Petraea, Armenia Minor, Assyria [Syria, Jordan, Lebanon and Iraq] and is based on the work of Claudius Ptolemy.

Laurent Fries (c.1490 – c.1531) was a physician, astrologer and geographer born in Alsace (nowadays France). After studying medicine and spending time at several European universities, he settled in Strasbourg in 1519, where he met publisher and printer Johann Grüninger. With Grüninger, he worked on a new edition of Claudius Ptolemeus’ “Geographia“, which was published in 1522 and 1525 and included woodcut maps reduced from an earlier work “Geographie Opus Novissima” by Martin Waldseemüller. Fries eventually had to move out of Strasbourg which marked the end of his cartographic career. He would continue to write on medicine, astrology and religion until his death in c.1531. The subsequent 1535 (and 1541) editions of Fries’ “Geographia” were published posthumously.

Johann Grüninger (c.1455 – c.1532) was a Swabish printer and publisher based in Strasbourg and was known to be one of the most prolific printers of the time. He was associated with the Saint Dié group of scholars formed by, amongst others, cartographer Martin Waldseemüller. After Grüninger’s death in 1531 or 1532, his son Christoph sold his woodcuts to Melchior and Gaspar Trechsel from Lyon who published the later editions of the “Geographia“.

Claudius Ptolemy (100-170 CE) was a Roman geographer and mathematician living in Alexandria, who compiled his knowledge and theories about the world’s geography into one seminal work. Although his maps did not survive, his mathematical projections and location coordinates did. During the Renaissance “Geographia” was rediscovered by monks and the maps were recreated based upon Ptolemy’s detailed instructions. The first printed edition of “Geographia” with maps was published in Bologna in 1477.