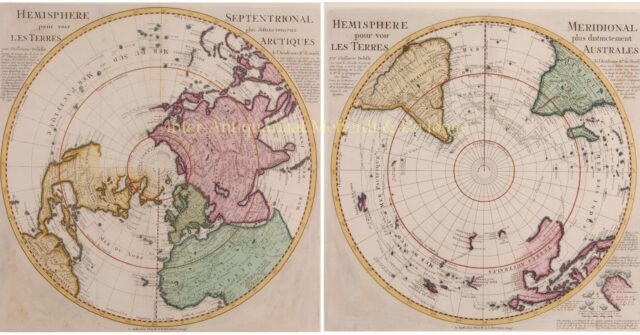 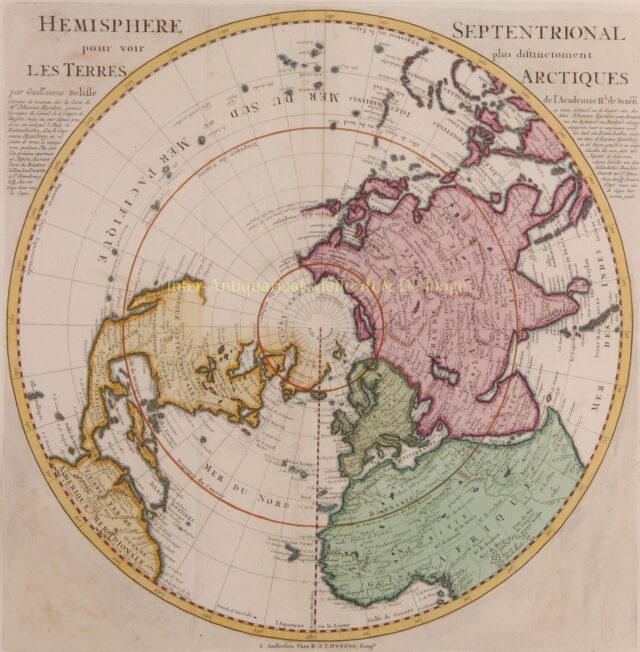 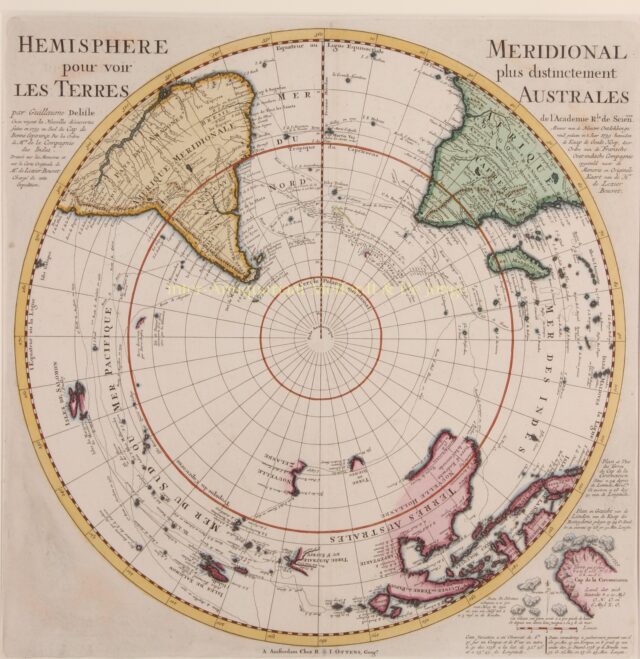 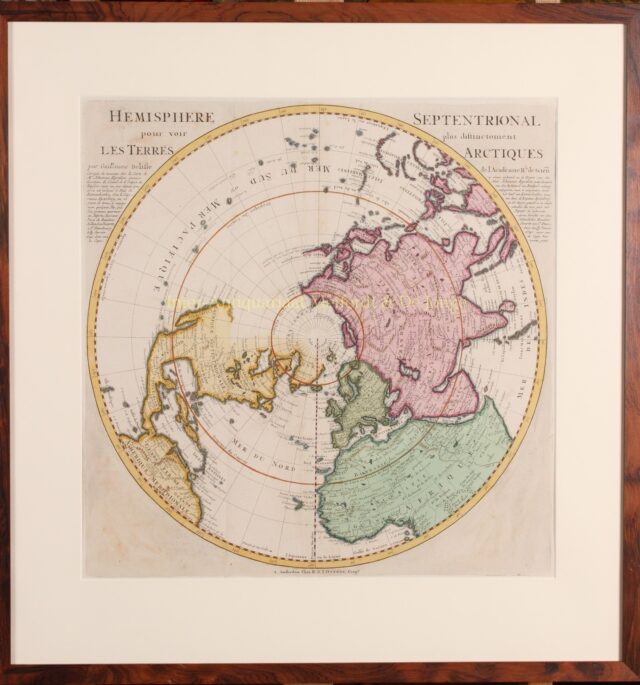 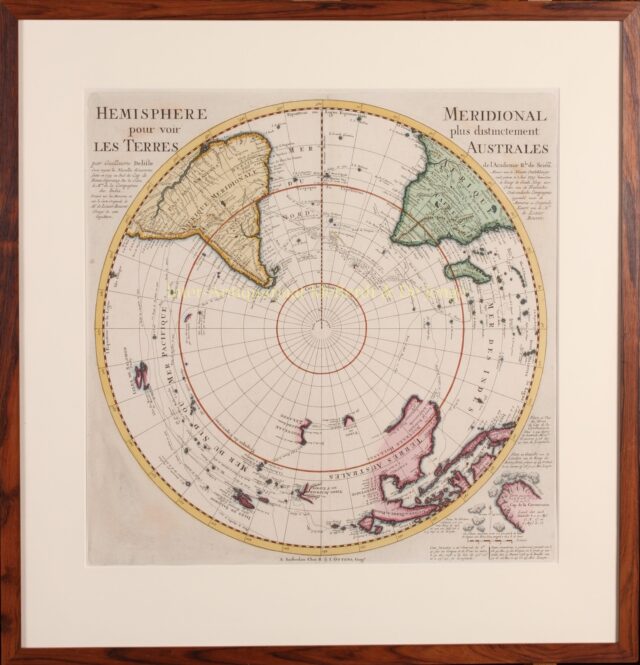 Fine map showing the Northern hemisphere with North America, the Arctic, the Pacific, Asia and Europe after the cartographic source by the French map maker Guillaume De L’Isle.

California is correctly shown as a peninsula, although the debate over its insularity was still ongoing. Across the Pacific, Japan (“Niphon”) is shown horizontally, a typical depiction for the time. To the northeast is an unfinished island called “Terre de la Compagnie”. A nearby note explains that the coast was discovered by Jean de Gama. This explanation actually elides two popular cartographic chimeras of the time. Juan de Gama, the grandson of Vasco de Gama, was a Portuguese navigator who was accused of illegal trading with the Spanish in the East Indies. De Gama fled and sailed from Macau to Japan in the later sixteenth century. He then struck out east, across the Pacific, and supposedly saw lands in the North Pacific. These lands were initially shown as small islands on Portuguese charts, but they ballooned into a continent-sized landmass in later representations.

This map of the northern hemisphere was based on the Guillaume De L’isle’s polar projections of 1714. While much of the map is identical to De L’isle’s map, a quarter century of exploration has lent itself to a few updates in our map by the Ottens brothers. The geography of Northeast Asia, including the Kamchatka Peninsula and surrounding islands appears with exceptional detail for the period. In the De L’isle’s version this area is almost completely omitted. Terre d’Yedso (Hokkaido) is shown as a separate set of islands, while in De L’isle’s map, they are connected by a land bridge to Japan.

The text in the upper left and right margins reveals the source for this updated work: a map published in 1734 by Jean Kyrilow, Secretary of the Council of the Empire of Russia, based on a 16 day journey by a Captain Spanberg. His map was used to provide a more complete outline of Kamchatka and northeast Russia.

De L’Isle’s map is an important early map of the South Polar regions, which would become the standard base map for French and Dutch map makers for much of the 18th Century.

De L’Isle abandons all notions of Terra Australis Incognita adopting a more accurate description based on actual discoveries. Several of the early Dutch discoveries in Australia are noted. Dampier’s Western Australian discovery of Shark Bay (“ Scharks Bay“) is noted, as are his exploits in NewBritain. In keeping with his scientific and accurate approach to cartography, De L’Isle shows two locations for the Solomon Islands , one according to “Fernand Gallego” (presumably Mendaña’s chief pilot Hernando Gallego), north-east of New Zealand , the other according to Robert Dudley, charted further towards South America.

This map mentions also the discoveries made South of Cape of Good Hope by the French East-India Company. Jean-Baptiste Charles Bouvet de Lozier sailed off with the Aigle and Marie searching the southern seas for land that could accommodate French trading vessels on route to the Far East. In the margin of the map his discovery is noted of the Cape of Circumcision on January 1st 1739 surrounded by “icebergs between 2 ft and 300 ft high”.

A number of navigational errors were committed by Bouvet de Lozier during his exploration casting doubt on the very existence of his Cape of Circumcision. Captains James Cook and James Clark Ross both tried to find it, without success, as it had been incorrectly charted. Incredibly, it was 1808 before again being sighted, this time by the English whalers James Lindsay of the snow Swan and Thomas Hopper of the Otter. The first landing however, did not come until 1822 when American Benjamin Morrell forged on shore. In honour of the discoverer, he renamed it Bouvet’s Island.

From Bouvet’s journal: “We have sailed 1200-1500 leagues in unknown waters, and for seventy days encountered almost continuous fog. We were forty days among the icebergs and we had hail and snow almost every day. The cold was severe for men accustomed to a warmer climate. They were badly clothed and had no means of drying their bedding. Many suffered from chilblains but they had to keep working. I saw sailors crying with cold as they hauled in the sounding line. To alleviate the men’s discomfort I distributed blankets, hats, shoes, old clothes…and I opened two kegs of brandy to issue to the crew. The dangers were as great as the discomforts. For more than two months we had been in uncharted waters. We had very little daylight and there were few times when we weren’t encountering some kind or risk…”

Joachim Ottens (1663 – 1719) and his sons Renier and Josua were prominent Dutch booksellers and map publishers from about 1680 to 1790. Joachim, the founder of the firm, was initially employed as a copperplate engraver by Frederick de Wit. In 1711 Joachim founded his own firm. Though Joachim died only a few years later, his sons Reinier and Joshua took over the firm and presided over its most prolific period.