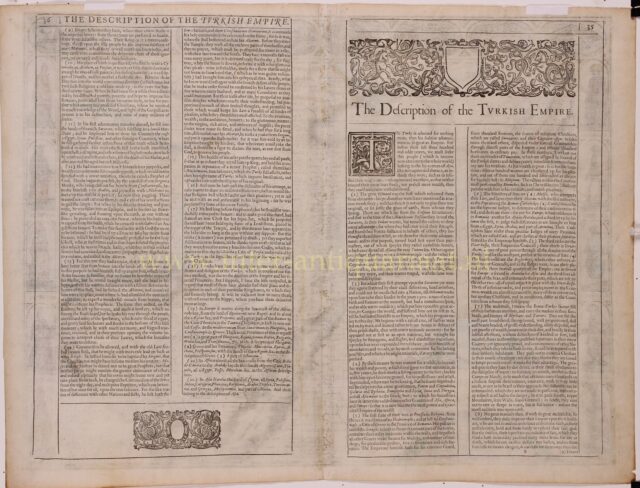 “The Turkish Empire”, copper engraving made by John Speed in 1626, published by George Humble of London in the first edition of the “Prospect of the Most Famous Parts of the World”. Coloured by a later hand. Size: 39 x 51 cm.

A beautiful example of John Speed’s carte-a-figure map of the Turkish Empire in the early years of the 17th century, encompassing North Africa, the Arabian peninsula, Turkey, Armenia, the Black Sea, and Greece and the Aegean, much of which was controlled by the Ottomans at the time. On the verso in English is a comprehensive (for that time) description of the Ottomans, their origins, their history, traditions and religion (including about “one Mohammed whose story is well worth our knowledge”).

The so-called Turkish Empire, which was in fact the Ottoman Empire, was one of the mightiest and longest-lasting dynasties in world history. This superpower ruled large areas of the Middle East, Eastern Europe and North Africa for more than 600 years. The head of state was a Sultan who had absolute religious and political authority over his people.

Western Europeans generally viewed them as a threat. Or as John Speed -rather undiplomatically- writes on the verso side of the map: “The Turk is admired for nothing more than his sudden advancement to so great an empire. For before these last 300 and old years, we must seek this people (which has become now a terror to the whole world) lurking in the by-corners of Asia like renegades and thieves as indeed they were; such as so infested their neighbors with rapes and murders, as that neither enjoyed their own lives freely, nor possessed more wealth, than they could maintain with the sword.” Many historians however, regard the Ottoman Empire as a source of great regional stability and security, and of important achievements in the arts, science, religion and culture as well. The Ottomans allowed freedom of worship in occupied territories, and in general governed with a loose reign so long as taxes were paid when due.

This fascinating map includes interesting commentary regarding the various peoples of the regions depicted. For example, reference is made to Prester John, the legendary Nestorian-Christian emperor or king-priest who, according to various reports, was supposed to have ruled in the far east beyond Persia and Armenia. Speed places him in Abyssinia. The map also contains annotations about the Black Sea, the Caspian Sea, the Persian Empire and Kingdom of Ormus.

Eight major cities including Alexandria, Constantinople and Jerusalem are depicted in vignettes along the top of the map, and running down either side are vignettes portraying husbands and wives of different peoples, including Greeks, Egyptians, Assyrians, Arabians and Persians clothed in local dress. The title of the map is enclosed in a large decorative cartouche, topped with the crescent moon banner of the Empire.