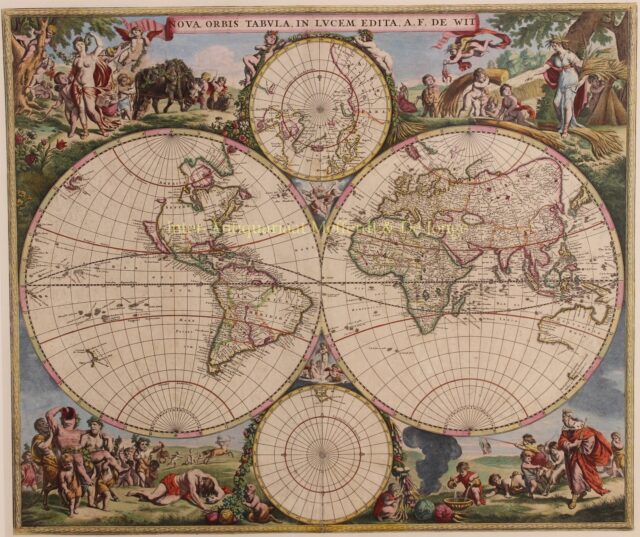 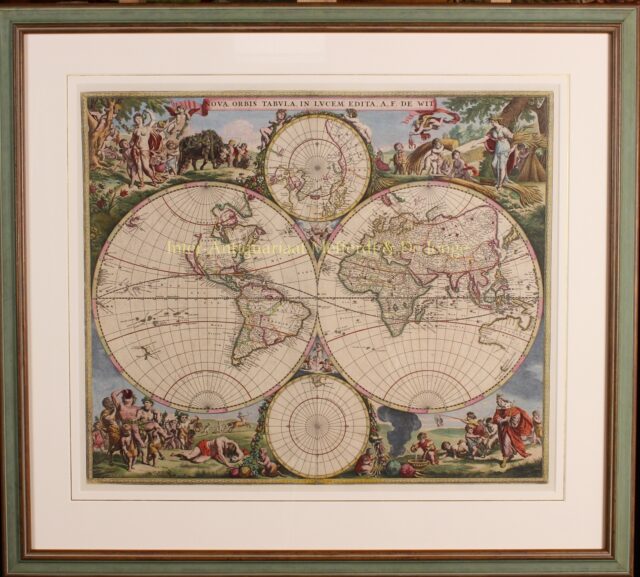 This is one of the most attractive double-hemispherical world maps of second half of 17th century. The brilliant scnes in the corners combine images of the four season, the elements, and the signs of the zodiac in a well-balanced and naturalistic way.

At top left is a personification of Spring, who also represents Virgo, with the element of Air billowing her robes. The bull of Taurus and the ram of Aries are shown to her right.

The top right vignette represents Summer, with the shore in the background illustrating the element Water. A putti holds a lobster representing Cancer, and another holds the lion of Leo.

The lower left scene represents Autumn and Earth with a wine-imbibing Bacchus and a scene of drunkenness The signs for Scorpio and Libra are held by two followers, while Sagittarius gallops in the background.

Winter holds court in the final vignette, with the element of Fire shown to the left. Aquarius is represented by a child pouring water into a basin. A group of raucous children in the background hold a goat representing Capricorn and a fishing pole with the double fish of Pisces.

The maps shows North America, with the Great Lakes appearing as one large semi-circle with an open western end, and the island of California is shown on the model of Henry Briggs with a flat northern coast, and a portion of Anian in the Pacific Northwest. South America has the mythical Lake Parime astride the equator, with the imaginary golden city of Manoa on its shores.

Asia displays a Japan with an oversized Iedso (Hokkaido) shown on the map of the Western Hemisphere.

A partial coastline for Australia is shown, and both New Zealand and Tasmania are indicated by only one stretch of coastline. Dutch discoveries are shown up to and including those of Abel Tasman 1642-1644.

The inset of the North Pole shows Hudson’s Bay with two southern bays, and the inset of the South Pole is nearly blank save for the very tip of South America and Tierra del Fuego.

The map includes two polar projections framed with floral wreaths and pairs of cupids.Frederick de Wit (1610-1698) became one of the most important Amsterdam-based publishers after the closing of the Blaeu firm in 1679. He published several atlases, Atlas Minor (1670), Zee Atlas (1675) and Atlas Maior (1690). This second world map by Frederick de Wit replaced earlier outdated map of 1660.