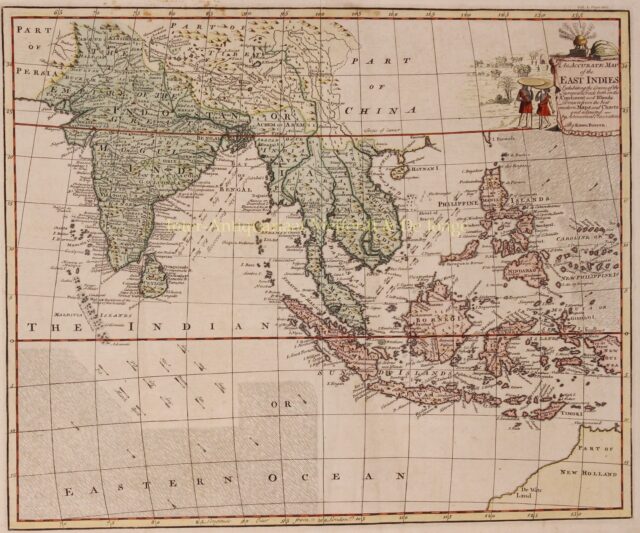 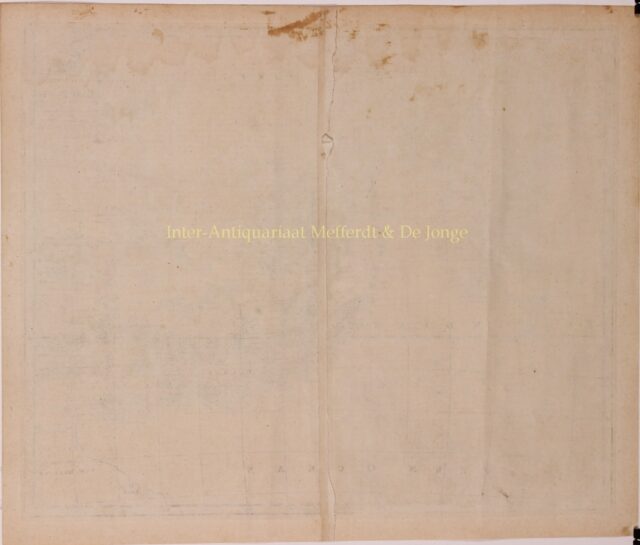 “An Accurate Map of the East Indies Exhibiting the Course of the European Trade both on the Continent and Islands. Drawn from the best modern maps and charts and adjusted by Astronomical Observations” Copper engraving by Emanuel Bowen published in London in 1744. With original hand colouring. Size: 37 x 45 cm.

This elaborate map of the East Indies extends from Australia, the Philippines and the Caroline Islands in the east to India, the Maldives and Afghanistan in the West. The map has excellent detail throughout. Many towns, mountains, rivers, islands and other features are named.

The map features information about the winds in the Indian Ocean and South China Sea, indicating the months merchant ships sail from Europe to the East-Indies and back.

The coast of Australia, labelled here as “New Holland”, appears in the lower right corner. Above in the upper right corner, a cartouche with local figures displays the title.

This map appeared in John Harris’ “Navigantium atque Itinerantium Bibliotheca,  or A Complete Collection of Voyages and Travels”, one of the best English language compilations of early voyages of the 18th Century.

Emanuel Bowen (1694-1767) was a British engraver and print seller. He was most well-known for his atlases and county maps. Although he died in poverty, he was widely acknowledged for his expertise and was appointed as mapmaker to both George II of England and Louis XV of France. His business was carried on by his son, Thomas Bowen. He also trained many apprentices, two of whom became prominent mapmakers, Thomas Kitchin and Thomas Jeffreys.