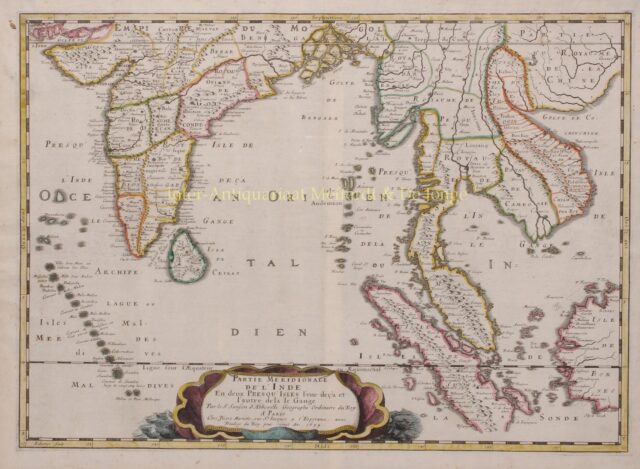 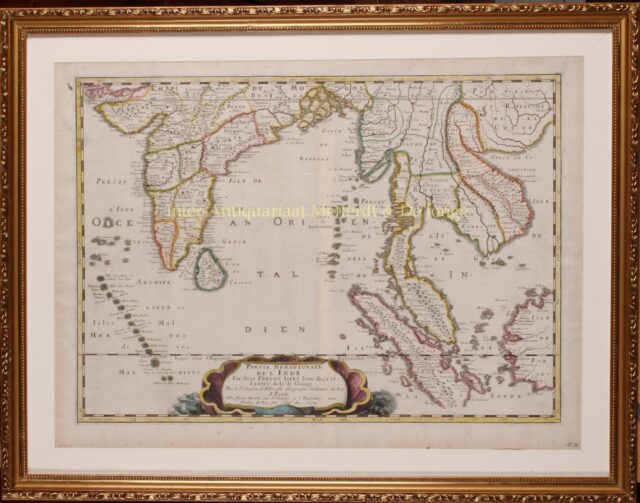 “Partie Meridionale de l’Inde en deux Presqu’Isles l’une de ça et l’autre de la le Gange” [Southern part of India in two peninsulas, on this side and on the other side of the Ganges], copper engraving made in 1654 by Jean Somer, published by Nicolas Sanson between 1658-1670 as part of his atlas Les Cartes Générales de toutes parties du Monde. Coloured by a later hand. Size: 37,5 x 52 cm.

The map covers most of modern India, Bangladesh and Myanmar, Sri Lanka, Thailand, Malaysia, Laos, Cambodia, and Vietnam, and parts of Indonesia and China, showing the cities and smaller settlements, rivers and mountain chains, as well as the borders of the seventeenth-century kingdoms and other major political divisions, most of them further subdivided.

With decorative title and imprint in a cartouche at the foot in the form of a cloth in an large shell floating on the sea. With the equator and Tropic of Cancer marked and latitude and longitude indications in the borders.

Of considerable historical interest for the state of European knowledge of India and Southeast Asia in the mid-seventeenth century. The title suggests that “India” is in fact both the Indian subcontinent and Southeast Asia.