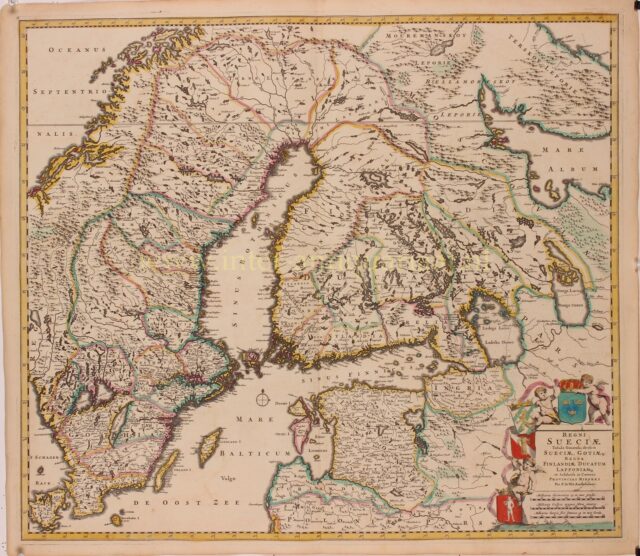 THE SWEDISH EMPIRE DURING ITS AGE OF GREATNESS

After its victories in the Thirty Years’ War, Sweden reached the height of its power during the Second Northern War, when its primary adversary, Denmark–Norway, was neutralized by the Treaty of Roskilde in 1658.

This fine map shows us the Swedish Empire with its provinces including Götaland, Laponia and the Duchy of Finland and the Dominions [Swedish: Svenska besittningar], territories that were under control of the Swedish Crown, but that never became fully integrated with Sweden. Including:

Estonia that placed itself under Swedish rule in 1561 to receive protection against Russia and Poland as the Livonian Order lost their foothold in the Baltic provinces. Territorially it represented the northern part of present-day Estonia. The area was significantly populated by Estonian Swedes.

The county of Kexholm, a sparsely inhabited part of Karelia on the Western and Northern shores of Lake Ladoga, annexed by Sweden in 1605.

Ingria and southern Karelia ceded to Sweden by Russia in the Treaty of Stolbova in 1617, following the Ingrian War. A century later Russia reconquered the area, providing an opportunity for Peter the Great to lay the foundations of his new capital, Saint Petersburg, in 1703.

The island Ösel, off the coast of Estonia ceded by Denmark-Norway to Sweden at the Treaty of Brömsebro (1645).

The title cartouche is embellished with three putti holding shields with the coats of arms of the three crowns of Sweden, of Götaland, of the House of Vasa of and Laponia.