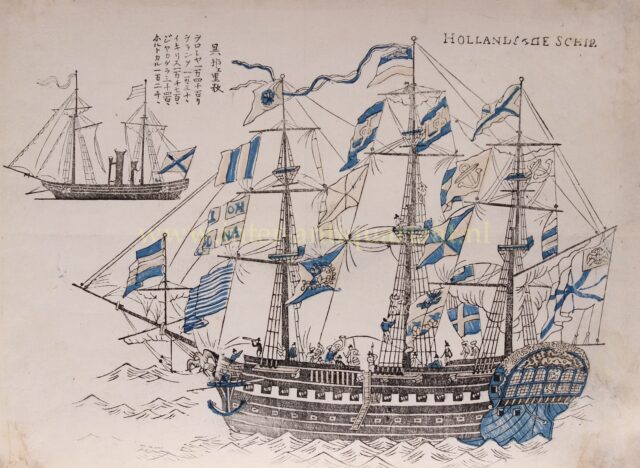 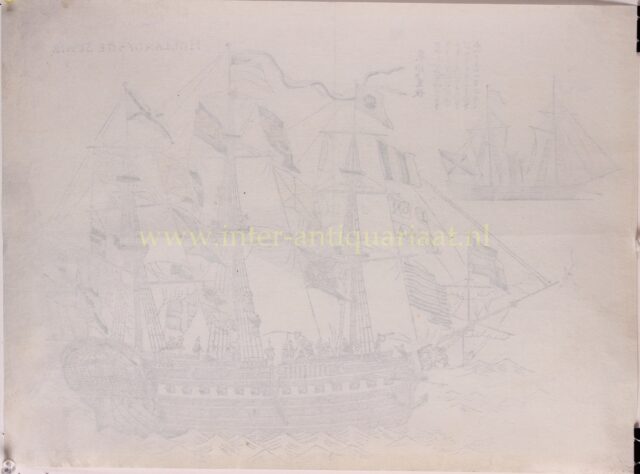 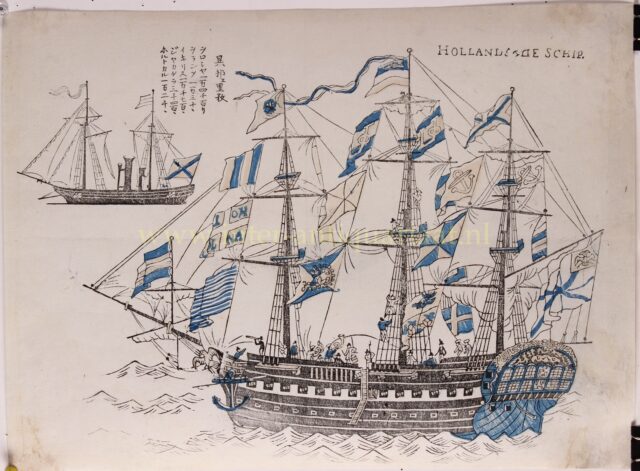 From the 1630s to the mid-1800s, Japan was virtually closed to foreigners. From 1641 onwards, the Dutch were the only Westerners allowed to stay and trade there. They had to adhere to strict regulations and were only allowed to live on Dejima, an artificial island in the port of Nagasaki.

The ships themselves, with their richly decorated sterns and colourful flags, were an attraction for the Japanese. Impressive was the speed with which the sails could be rolled up and down, and the heavy cannons that enveloped the ships in clouds of smoke when a salute was fired.

In 1858 the Dutch monopoly ended and the Dejima era was over. The United States, Great Britain, France, and Russia also gained trade rights with Japan. The foreigners settled in Yokohama, which quickly developed into Japan’s convenient port. They had much more freedom of movement there than in Nagasaki. Women were now also allowed to stay there. An international community developed, in which the Dutch were no longer the most important.

In 1695 Nishikawa Joken, the Nagasaki scholar describing the people’s of the world, wrote about “Red-Hair ships: The average length of the these ships is 25-26 ken (45,5-47,3 m), whilst the smaller ones are only about 20 ken (36,4 m). Their depth is 7 or 8 ken (12,7 or 14,6 m). They mount 22, 23, 24 or 25 guns as a rule, each measuring 8 or 9 shaku (240 or 270 cm). There are four masts (including the bowsprit), each of which is made in two pieces, being joined at a circular top. These masts can be lengthened or shortened when and if required, whilst each mast is provided with two sails (this woodcut shows three), all made of sail-cloth. Formerly ships measuring 33 ken (60m) in length sometimes came. The rudder is affixed to the stern. The anchors are all made of iron, some of them being as long as 3 or 4 ken (5,5 or 7,3m). The ropes are made of hemp, measuring 1 shaku, 2 or 3 sun (36 or 39 cm) in circumference. The black coat of the hull is coated with pitch. The red-rust coloured part of the ship below the water-line is everywhere covered with small iron nails. These ships never required repairs during their lifetime. Their ship’s gear, rope, tackle etc. are all coated with pitch; pitch is a substance composed of pine resin mixed with oil.

The Dutch ship on this rare woodcut is decorated with imaginary international flags. A fanfare seems to be playing music whilst the ladder is down to let visitors on board. On deck someone uses a telescope, a Dutch invention that created awe in 17th century Japan.