Leonetto Cappiello (1875-1942) is seen as the father of the modern poster. He broke with the elegant style of art nouveau artists such as Alphonse Mucha and dominated Parisian poster art for 20 years. Cappiello was influenced by other poster designers such as Jules Chéret and Toulouse-Lautrec.

Characteristic for Cappiello is his attention to one catchy subject, usually humorous, with exuberant colours, an image that you understand immediately and that you will never forget. 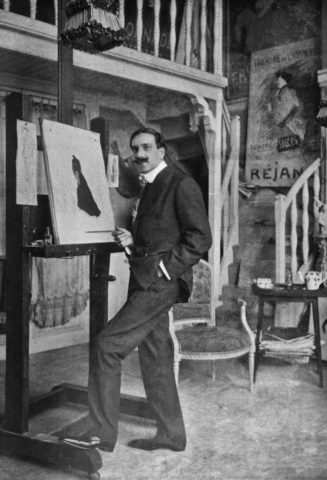 Cappiello made advertisements for a variety of industries: beverages, travel, sports, cigarettes, cigars, and theaters in both France and Italy. Many of his images not only influenced subsequent generations of artists, but have become sought-after icons today.

The golden age of absinthe was between 1880 and 1910, it became accessible to all social classes and it became almost as popular as wine.

The “Green Hour” used to be from about 5pm to 7pm, when the cafes were full of people and all the chairs and tables along the main boulevards were overflowing. The love for absinthe was widespread, there was a huge amount of advertising material, and artists claimed they got their inspiration from drinking absinthe. “La fée verte” [the Green Fairy] was found in all private homes as well, and represented 90% of all the aperitifs that were consumed. Distilleries opened one after another and created jobs for thousands of people in both France and the rest of Europe. During these years, absinthe had become the national drink of France.

In its heyday, the Pernod Fils distillery in Lunel was producing as much as 30.000 litres of absinthe per day, and was exporting its product around the world. Gempp Pernod absinthe was widely known for its distinct taste.

By 1910, France’s rate of absinthe consumption had topped some 36 million liters per year. With a temperance movement growing around the world, many prominent French politicians and scientists turned their interest to the ‘national drink’, resulting in a ban in 1914.