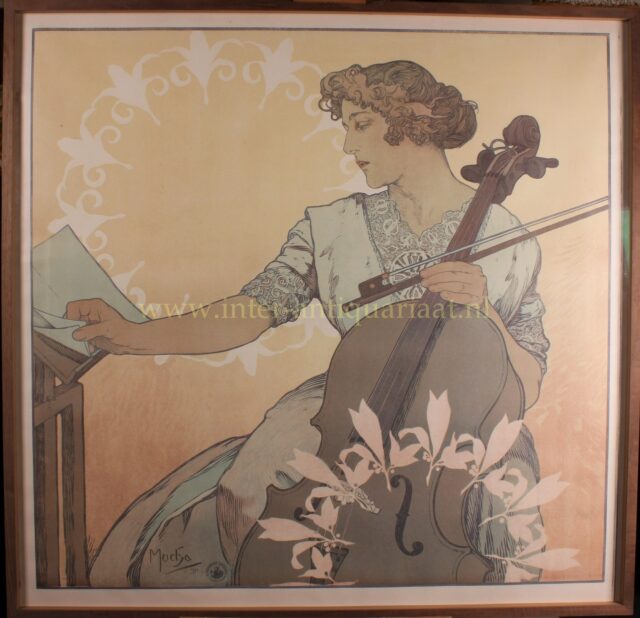 Alphonse Mucha (1860-1939) was a Czech painter, illustrator, and graphic artist, best known for his distinctly stylized and decorative theatrical posters. He produced illustrations, advertisements, decorative panels, and designs, which became among the best-known images of the period.

In 1887, Mucha moved to Paris, where he started to become world renowned due to his commercial work. He was convinced that art could enhance the quality of life and should therefore be accessible to all. Mucha’s illustrations of elegant women surrounded by stylized flowers and flamboyant swirling lines gave colour to the city of Paris, where anyone could enjoy Mucha’s posters in the street. Le style Mucha became almost synonymous with Art Nouveau, the modern art movement that came to define the look of the French capital.

At the height of his fame, Alphonse Mucha was commissioned to do a poster for the Louisiana Purchase Exposition of 1904. This project lead to a trip to the USA; he visited New York, Boston and Chicago.

The following year he returned to Chicago, staying with his friend Albert Vojtech Černý, a well-known Czech musician who had founded the Bohemian Conservatory of Music there.

Mucha prospered in Chicago: he taught at the Chicago Institute of Art, gave lectures, put on exhibitions, and was always in demand at social events. He was even commissioned to design containers for perfumed soaps, which were marketed with his name: Savon Mucha.

Mucha’s friend Černý had three musical daughters. The middle daughter, Zdeňka Černý, shared her father’s instrument; she was a promising cello-player from an early age.

When she was seven, Mucha promised her that he would paint her portrait when she became a real virtuoso on her instrument. She had no trouble keeping her part of the bargain. By her sixteenth birthday she had become known as “The Greatest Bohemian Violoncellist” and Mucha gladly painted her portrait in 1913. “Mucha worked from a photograph of Zdenka with a cello, but idealized her face by investing it with a spiritual quality, her love of music. He created a unique poster-portrait by adjusting the slant of her head, softening her expression, lightening the hair, lifting the hand turning the sheet music, and elongating the body. Two circles, one with lilies symbolizing Zdenka’s youthful innocence, the other with laurels of her past triumphs, complete the design suffused with warm light.”

Mucha’s splendid portrait of Zdeňka Černý was to be used to promote Zdeňka’s scheduled tour of Europe the following year but, due to the outbreak of the first world war, the tour was cancelled.

In 1916, she married Otto Vasak (1882–1961). It is said that Vasak forbade her to continue her musical career and even to teach. Although Zdeňka lived to be 102, “The Greatest Bohemian Violoncellist” never played the cello again.