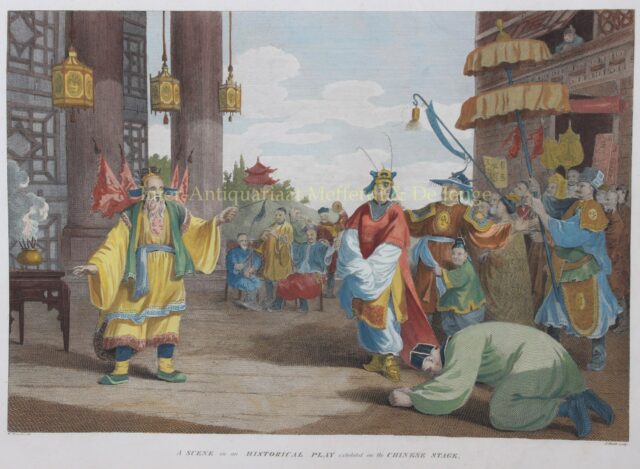 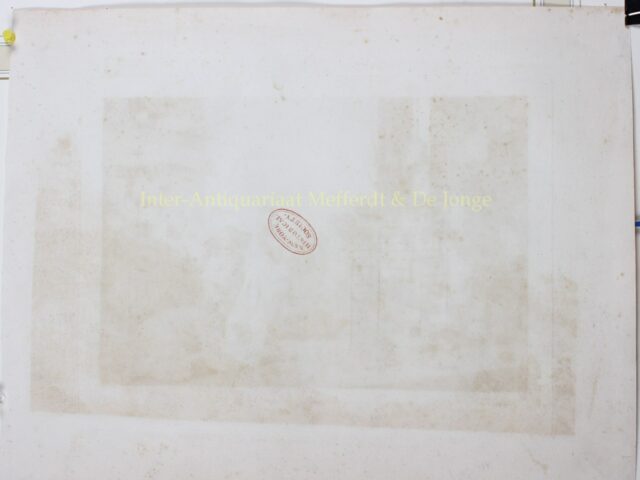 “A scene in an historical play exhibited on the Chinese Stage.” Copper engraving by James Heath after a drawing by William Alexander (1767-1816 ) from the “Authentic account of an embassy from the King of Great Britain to the Emperor of China; including cursory observations made, and information obtained, in travelling through that ancient empire” written by Sir George Leonard Staunton and published April 12, 1796 in London by G. Nicol. Coloured by a later hand. Size (image): 24 x 35,3 cm.

This particular print is one of the principal scenes from a drama the Europeans had seen: “One of the dramas, particularly, attracted the attention of those who recollected scenes, somewhat similar, upon the English stage. The piece represented an emperor of China and his empress living in supreme felicity, when, on a sudden, his subjects revolt, a civil war ensues, battles are fought, and at last the archrebel, who was a general of cavalry, overcomes his sovereign, kills him with his own hand, and routes the imperial army. The captive empress then appears upon the stage in all the agonies of despair naturally resulting from the loss of her husband and of her dignity, as well as the apprehension for that of her honour. Whilst she is tearing her hair and rending the skies with her complaints, the conqueror enters, approaches her with respect, addresses her in a gentle tone, soothes her sorrows with his compassion, talks of love and adoration, and like Richard the Third, with lady Anne, in Shakspeare, prevails, in less than half an hour, on the Chinese princess to dry up her tears, to forget her deceased consort, and yield to a consoling wooer. The piece concludes with the nuptials, and a grand procession.” One of the principal scenes is represented in Plate 30 of the folio volume.