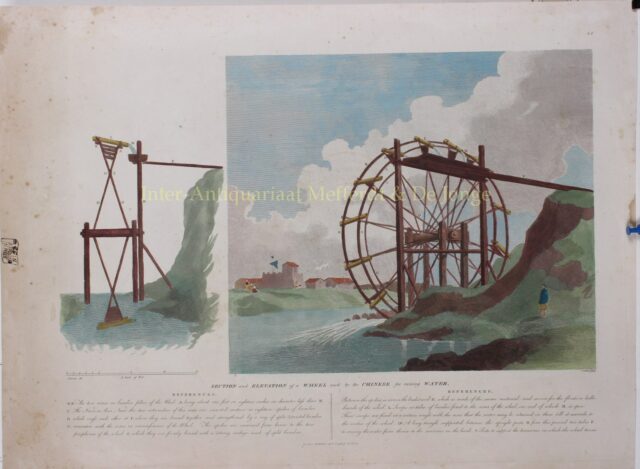 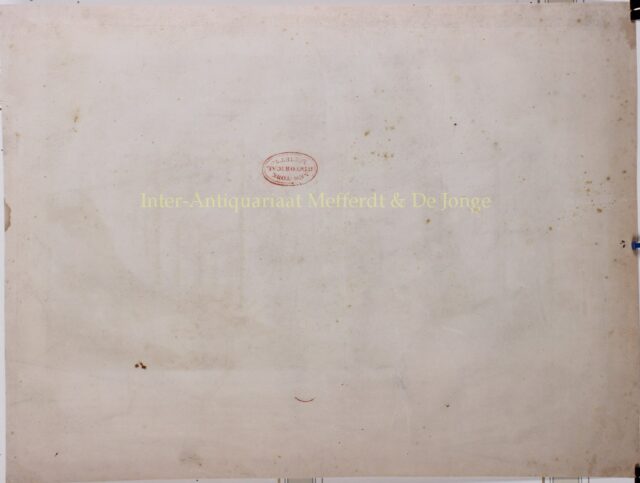 “Section and Elevation of a Wheel used by the Chinese for Raising Water” Copper engraving by William Skelton after a drawing by William Alexander (1767-1816 ) from the “Authentic account of an embassy from the King of Great Britain to the Emperor of China; including cursory observations made, and information obtained, in travelling through that ancient empire” written by Sir George Leonard Staunton and published April 12, 1796 in London by G. Nicol. Coloured by a later hand. Size (image): 26,5 x 45 cm.

Staunton describes the irrigation with a water wheel as follows: “To apply the system of irrigation to those plantations, which were on a sandy soil far elevated above the river, it was necessary to raise the water to heights which could not be attained by the means hitherto mentioned to be practised by the Chinese. But the want suggested the resource; and a machine was invented by them, as ingenious in its contrivance, as it was cheap in its materials, easy in its operation, and effectual to its purpose. Two hard-wood posts or uprights were firmly fixed in the bed of the river, in a line perpendicular to its bank. These posts supported the axis, about ten feet in length, of a large and durable wheel, consisting of two unequal rims, the diameter of one of which, closest to the bank, being about fifteen inches shorter than that of the outer rim; but both dipping in the stream, while the opposite segment of the wheel rises above the elevated bank. This double wheel is connected with the axis, and is supported by sixteen or eighteen spokes obliquely inserted near each extremity of the axis, and crossing each other at about two-thirds of their length. They are there strengthened by a concentric circle, and fastened afterwards to the rims: the spokes inserted in the interior extremity of the axis, reaching the outer rim, and those proceeding from the exterior extremity of the same axis, reaching the inner and smaller rim. Between the rims and the crossings of the spokes, is woven a kind of close basket-work, serving as ladleboards or floats, which meeting successively the current of the stream, obey its impulse, and turn round the wheel. To both its rims are attached small tubes or spouts of wood, with an inclination of about twenty-five degrees to the horizon, or to the axis of the wheel. The tubes are closed at their outer extremity, and open at the opposite end. By this position, the tubes which happen in the motion of the wheel to be in the stream with their mouths or open ends uppermost, fill with water. As that segment of the wheel rises, the mouths of the tubes attached to it, alter their relative inclination, but not so much as to let their contents flow out, till such segment of the wheel becomes the top. The mouths of those tubes are then relatively depressed, and pour the water into a wide trough placed on posts, from whence it is conveyed as may be wanted among the canes.”