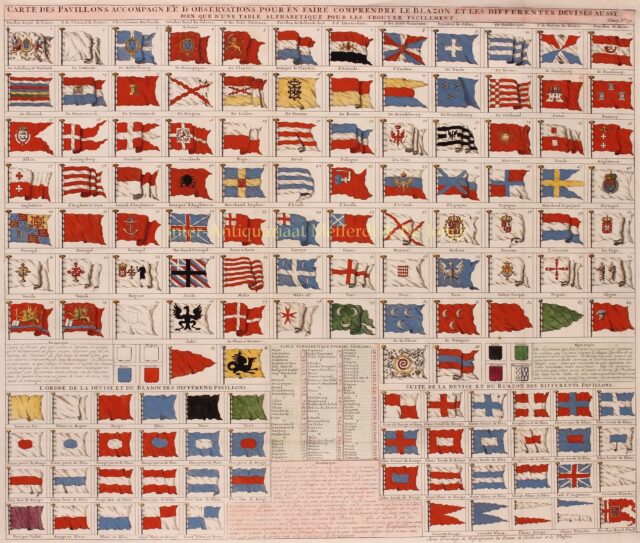 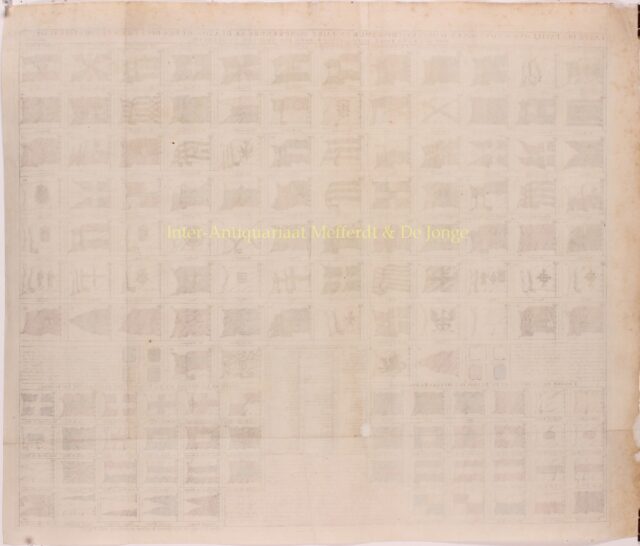 CHART OF THE WORLD’S FLAGS AND NAVAL ENSIGNS

In the lower row, the flag of Empire of China stands out. It appears as a great whirlpool surrounded by eight decorations, which is a misinterpretation of the Qing flag, a dragon on a yellow field with eight banners.

Other flags of interest include the pope’s banner, a curious Portuguese flag bearing a priest, the flags of various trading companies, the flag of the Tartars (dragon), and the arm and saber flag of Poland. Courland (Kurzeme, the western part of Latvia) sports both a national banner and a naval flag featuring a black crab on a field of red.

In addition to the actual flags depicted on the sheet, Chatelain provides a primer for understanding a flag’s heraldic terminology in general, and supplies the reader an alphabetical table to aid in the location of specific flags on the sheet.

This sheet was printed in the last of the seven volumes of Chatelain’s Atlas Historique, a monumental work which was published over the course of some fifteen years – the first volume was completed in 1705, the seventh in 1720.

Henri Abraham Chatelain (1684-1743) was a Huguenot pastor of Parisian origins. Chatelain proved a successful businessman, creating lucrative networks in London, The Hague, and then Amsterdam. He is best known as a Dutch cartographer who published the Atlas Historique, in seven volumes between 1705 and 1720. Innovative for its time, the Atlas Historique combined fine engraving and artwork with scholarly studies of geography, history, ethnology, heraldry, and cosmography. It was published thanks to a partnership between Henri, his father, Zacharie, and his younger brother, also Zacharie, the text was contributed to by Nicolas Gueudeville, a French geographer. The maps were by Henri, largely after the work of Guillaume Delisle, and they offered the general reader a window into the emerging world of the eighteenth century.