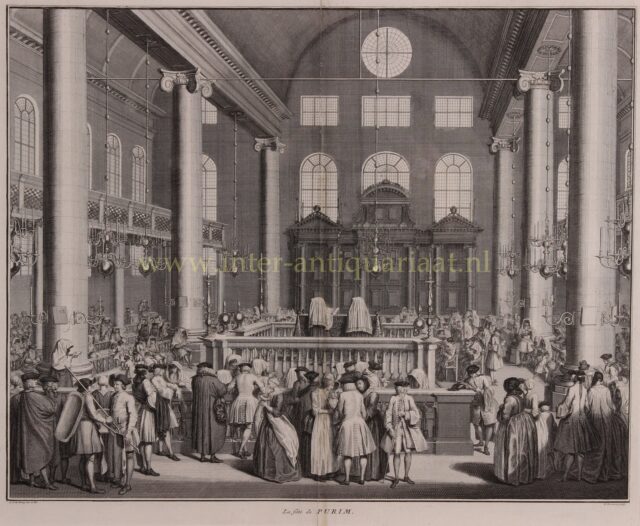 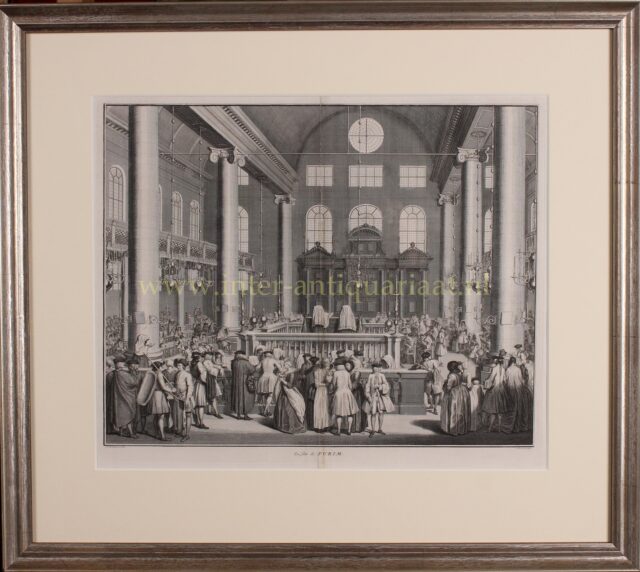 Purim in the Portugese synagoge in Amsterdam – Bernard Picart, 1738

“La fête de Purim”, copper engraving made by B. Bernaerts after a drawing by L.F. du Bourg for the Cérémonies et Coûtumes religieuses by Bernard Picart, published in Amsterdam 1738. Size (plate): 33 x 40 cm.

During the Jewish holiday of Purim it is commemorated that the Jewish people, which lived in the Persian Empire, is saved from Haman who was planning to have all of Persia’s Jewish subjects killed. The story is recounted in the Book of Esther.

The Persian king Ahasuerus had taken Jewish Esther as his wife and queen. Her cousin and foster father Mordecai had learned that the Persian anti-Semitic royal vizier Haman was planning to exterminate the Jews. Mordecai reported this to Esther, who conveyed it to her husband, whereupon countermeasures could be taken. As a result, Haman himself was put to death together with his sons and other cronies, turning this day of deliverance a day of feasting and rejoicing among the Jews.

The engraving shows us the inside of the Portuguese synagogue in Amsterdam where “the Megillah” scroll is read by a cantor. Those present in the synagogue read the text from their own book. When Haman’s name is mentioned during the reading, the congregation engages in noise-making to blot out his name using a grager.