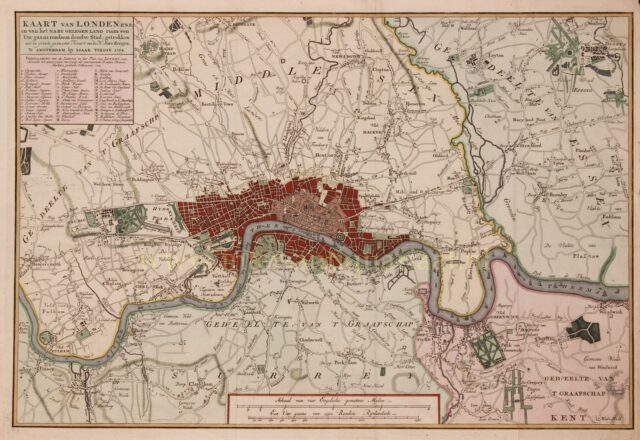 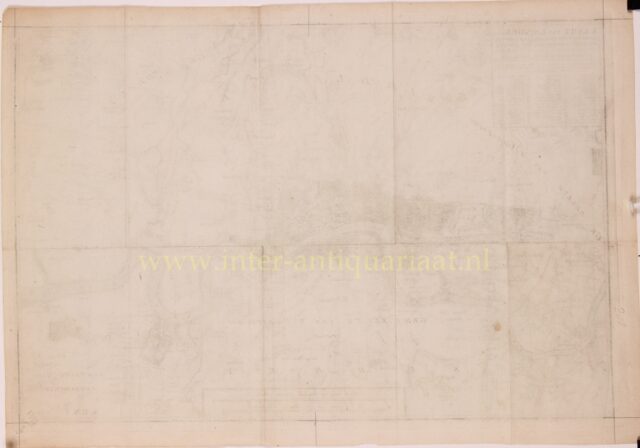 , copper engraving published by Isaak Tirion in Amsterdam in 1754 after the design of John Rocque. Coloured by a later hand. Afm. 28 x 44 cm.

The 18th century was a period of rapid growth for London, reflecting an increasing national population, the early stirrings of the Industrial Revolution, and London’s role at the centre of the evolving British Empire.

In 1707, an Act of Union was passed merging the Scottish and the English Parliaments, thus establishing the Kingdom of Great Britain. A year later in 1708 , St Paul’s Cathedral was completed.

During the Georgian period London spread beyond its traditional limits at an accelerating pace. New districts such as Mayfair were built for the rich in the West End.Up until 1750, London Bridge was the only crossing over the Thames, but in that year Westminster Bridge was opened and encouraged an acceleration of development in South London and in the East End, the Port of London expanded downstream from the City.

A phenomenon of the era was the coffeehouse, which became a popular place to debate ideas. Growing literacy and the development of the printing press meant that news became widely available. Fleet Street became the centre of the embryonic national press during the century.

18th-century London was dogged by crime. The Bow Street Runners were established in 1750 as a professional police force. Penalties for crime were harsh, with the death penalty being applied for fairly minor crimes. Public hangings were common in London, and were popular public events.