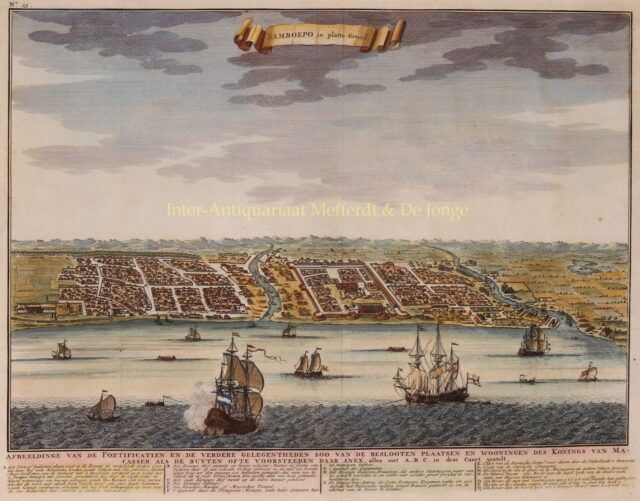 Fortress Somba Opu was the commercial capital of Makassar (Sulawesi, Indonesia). In the 1630s, kings and nobles established their residence in Somba Opu, staying in a house built on thick pillars. A number of detached houses were located in rear (east) and northern side of the fort. They were grouped around the royal complex in the southwest side of Somba Opu, which consisted of two enormous wooden palaces, storehouses, and a mosque. Outside Somba Opu fort were two major markets each to the north and south, and houses of the commoners. The quarters of the Portuguese, the Indians, and some European factories were located along the north coast.

The Dutch text under the bird’s-eye view of the town is interesting. It reads e.g. that the walls of the fortress are poorly maintained and that they would not withstand a canon shot or even a wooden ram.

While Valentijn’s maps and diagrams were prized possessions, his scholarship, judging by 21st century standards was unscrupulous. Valentyn’s use of the products of other scientists’ and writers’ intellectual labour and his passing it off as his own, reveals a penchant for self-aggrandisement.