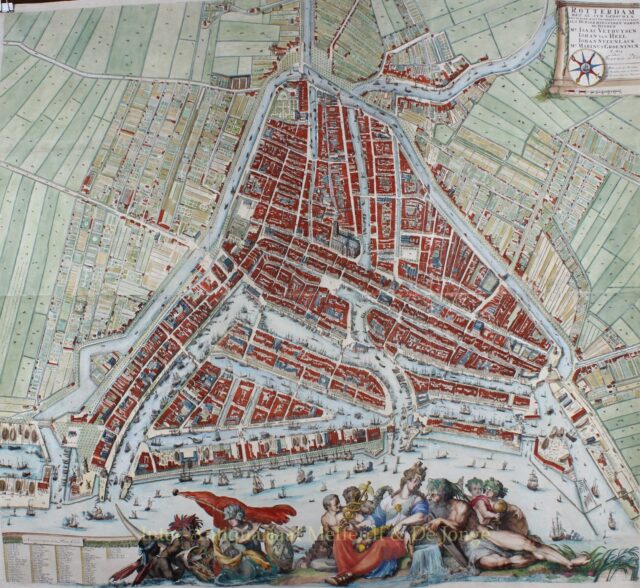 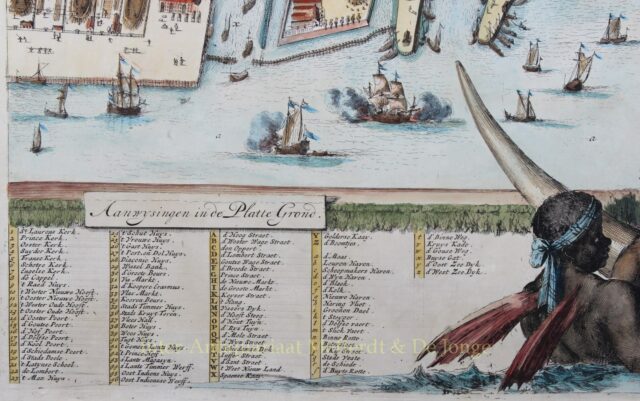 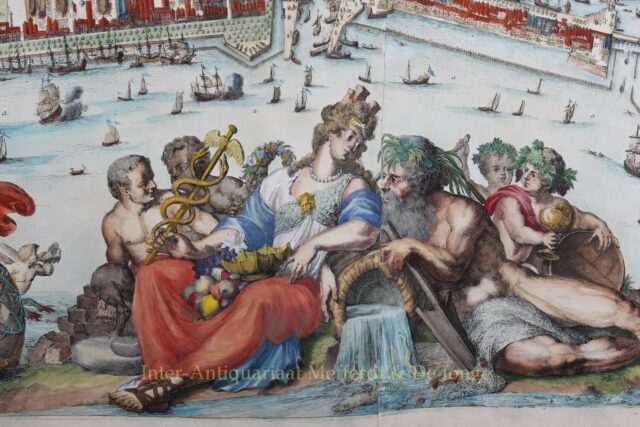 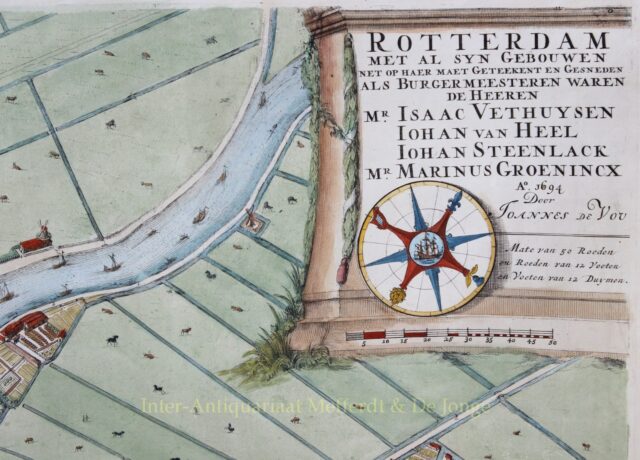 Etching with engraving, printed on 6 sheets, made by Johannes de Vou and Romeijn de Hooghe in 1694. Coloured by a later hand. Size (print): 120 x 140 cm. (This is only the plan of Rotterdam without the profile, views of the city or coats of arms of mayors. If you are interested in the profile, we have it here.)

Of all maps of Rotterdam, this plan by De Vou and De Hooghe is the best known and most spectacular.

At the end of the 17th century Amsterdam, The Hague, Leiden, Delft and Haarlem already had respectable wall maps and Rotterdam did not want to stay behind.

When making the map the city was measured, drawn and engraved by Johannes de Vou. Romeijn de Hooghe was responsible for the rich decoration. De Hooghe was a famous artist in his day and was awarded more than fl. 2.000 for his work, surveyor De Vou received less than fl. 100.

When the map was finished the members of the town council were given a coloured and framed copy. Until  1711 we can trace expenditures for colouring of copies of the map. Nothing can be found that the map was ever sold, even if this was the intention in 1690. Of the 600 copies printed, a large number still remained in 1711.

The municipality had “atlases” made in 1744 from the loose sheets of maps still available. Also these atlases were given to city council members and higher city officers. According to a decree of 1777, two atlases needed to remain at hand at all time, probably to be available for official gifts.

The very large scale of the map, the ‘bird’s eye perspective’ of the urban development inside and outside of the city, the depiction of all kinds of activity, in particular the shipyards, visualise the city as it was at the end of the 17th century and is unrivalled by any other document. Nothing else shows the organisation of the so-called Rotterdam ‘lanes area’ (a recreational area just outside the city boundaries) in such a precise way. Whenever the map is put next to other cartographic or topographic documents, one gets the impression of great reliability.

The map shows us Rotterdam in its heyday of the Dutch Golden Age, the seventh city in the order of the States of Holland, but the second port of the Dutch Republic. This status had to be reflected by the map. With success: of all the town plans published in the 17th century, the one of Rotterdam by Johannes de Vou and Romeijn de Hooghe was the largest. Therewith satisfying the wish of every true Rotterdammer.

Justly, the Rotterdam municipality sent a copy of the map to the Paris world exhibition still in 1867.