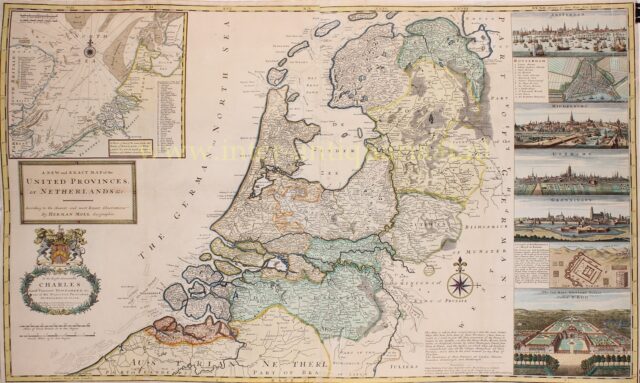 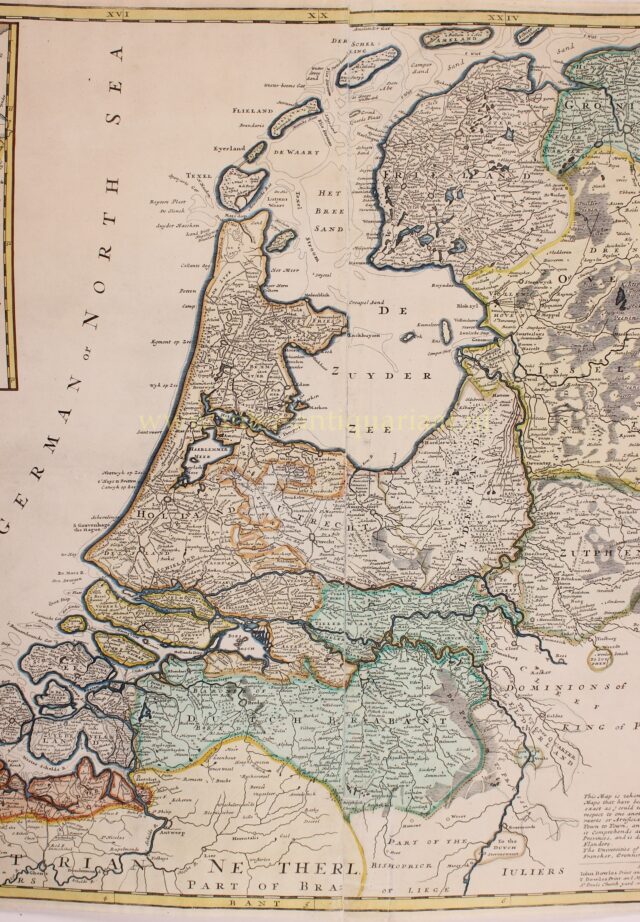 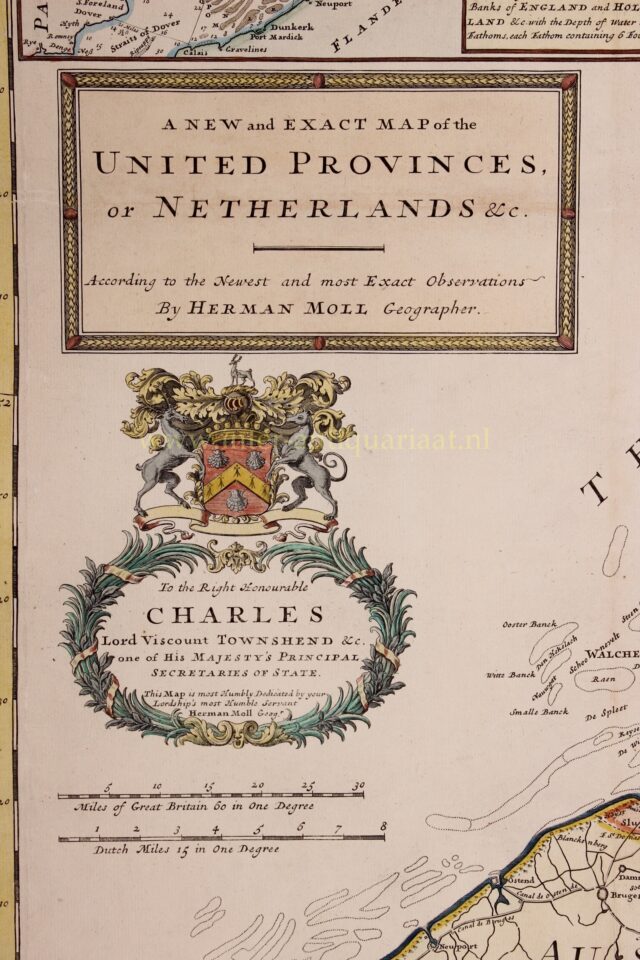 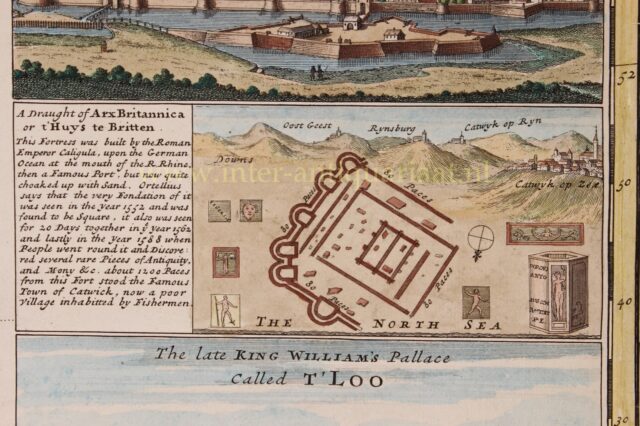 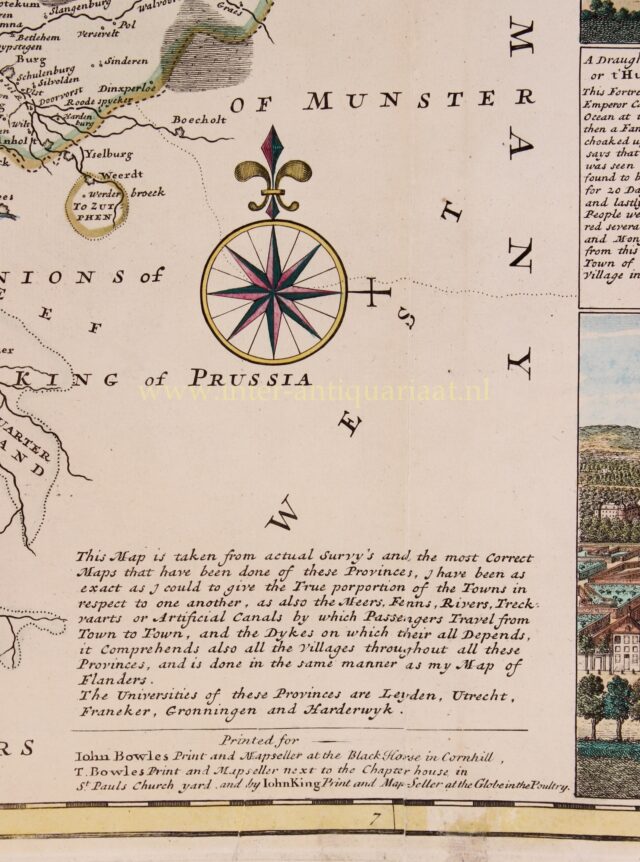 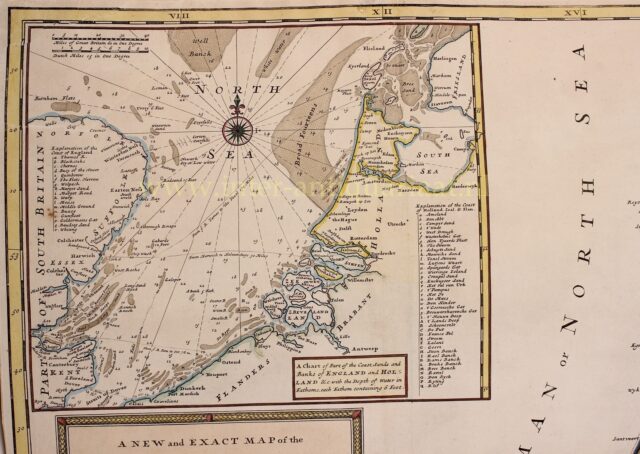 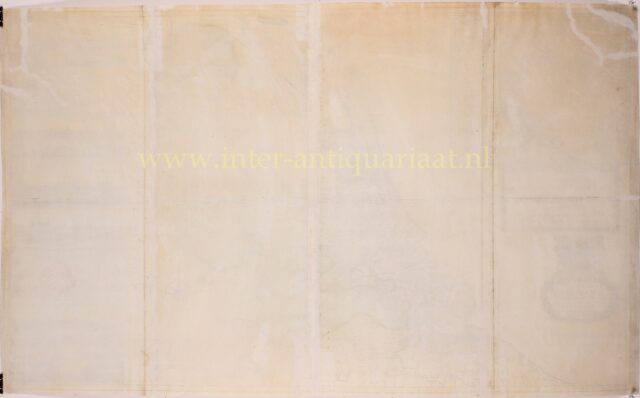 This grand map of the Netherlands exemplifies Moll’s particular virtues as a mapmaker. It is drawn on a large scale and has a wealth of geographical details including all the principal towns and major roads. Atlas maps on this scale were a recent innovation, and Moll made scale, readability and what would now be called user-friendliness hallmarks of his style.

There is an inset map of the Channel and the North Sea along with seven views of the major towns, including Amsterdam, Rotterdam, Middelburg, Utrecht, Groningen as well a plan of Arx Britannica (“This fortress was built by the Roman emperor Caligula, upon the German Ocean at the mouth of the river Rhine, the a famous port, but now quite choked up with sand. [Abraham] Ortelius says that the very foundation of it was seen in the year 1552 and was found to be square, it also was seen for 20 days altogether in the year 1562 and lastly in the year 1588when people went round it and discovered several rare pieces of antiquity and money etc. About 1200 paces from this fort stood the famous town of Katwijk, now a poor village inhabited by fishermen.”), and a view of King William’s palace Het Loo.

In his disclaimer Moll writes: “This map is taken from actual surveys and the most correct maps that have been done of these provinces. I have been as exact as I could to give the true proportions of the towns in respect to one another, as also the meers [lakes], rivers, trekvaarts or artificial canals by which passengers travel from town to town, and the dykes on which they all depend.”

Herman Moll (1654-1732) came to London in about 1678 from Germany or Holland and worked as an engraver for Moses Pitt, among others. He clearly had a talent for making interesting friends and provided maps for Daniel Defoe’s Robinson Crusoe and Jonathan Swift’s Gulliver’s Travels. He also knew explorer/buccaneer William Dampier and the chemist Robert Boyle. From 1689, he had his own London shop. Maps of a uniquely Moll character began to appear during Queen Anne‘s reign, and his individual style of mapmaking grew increasingly more distinct as his career progressed. Herman Moll, was one of the most significant and distinctive European cartographers of the late seventeenth and early eighteenth centuries. He enjoyed a lengthy and productive career that spanned almost six decades and yielded more than two dozen geographies, atlases, and histories, as well as myriad separate maps, charts and globes spanning the known world. Although generally not held in high regard for the originality or content of his cartography, he possessed a strong and tasteful design sense that, when combined with his engraving talents, led to the creation of unique and aesthetically pleasing maps, some of which must be considered graphic masterpieces. His work was much copied by other publishers and he enjoyed a high reputation. Moll and his maps flourished during the fascinating and dynamic era of the British Enlightenment and the early, heady days of empire.