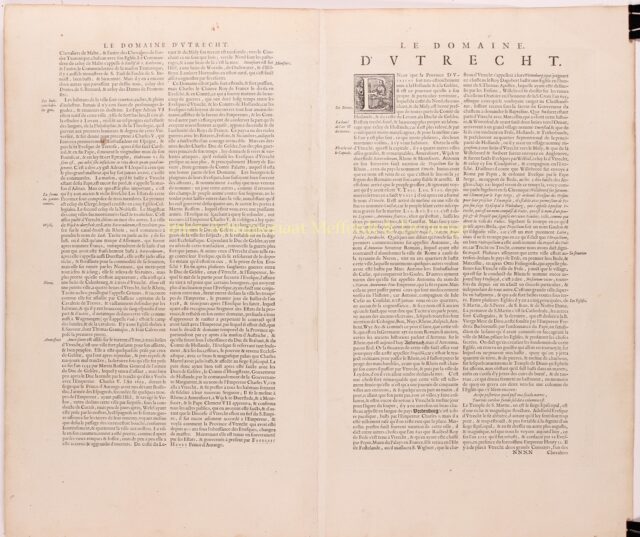 Willem Blaeu made this map on the basis of a map by Balthasar Florisz. van Berckenrode from 1620. There were no country houses along the river Vecht or in ‘s-Graveland at that time. However, there are still monasteries along the Vecht that have already fallen into ruin.

It is the time when canals were dug between cities and existing waterways were made suitable for towing ships. Along the Amstel river a towpath was made in 1599 from Amsterdam to Uithoorn and between 1626 and 1628 parts of the Amsterdam-Utrecht section. The first tow canals were built as connections between two cities, but in the course of the 17th century more and more separate canals were linked together. Therewith creating a large network of towage canal network.

From 1588 (until the French period in The Netherlands) the Lordship of Utrecht was one of the regions of the Dutch Republic. What the map does not tell is that when is was published there was a plague epidemic that raged in Utrecht (until 1638) and that no less than 15 percent of the Utrecht population would die as a result.

Willem Blaeu was inspired to make an atlas like never before seen in the world. Financial reasons for this were secondary, the risk was too great for that. But there was rivalry between the publishing houses of Blaeu and Jansson, and motives such as prestige and public apprearence were at least as important. He wanted to create something that would overwhelm the civilized world in the heyday of the power of Amsterdam power. From this ambition eventually the “Atlas Maior” was created.