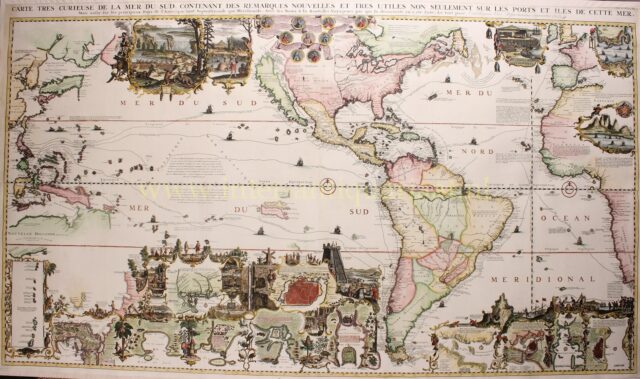 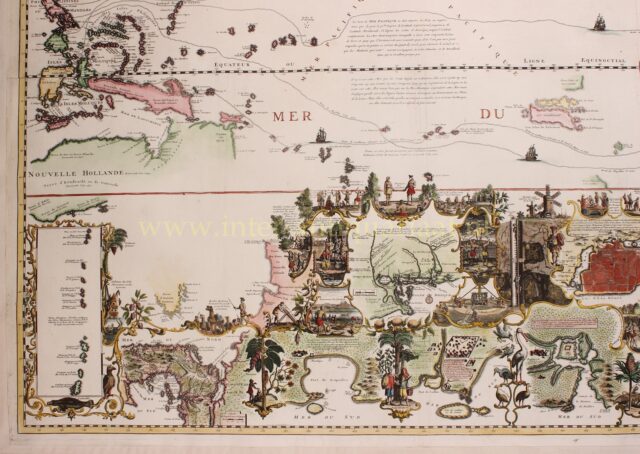 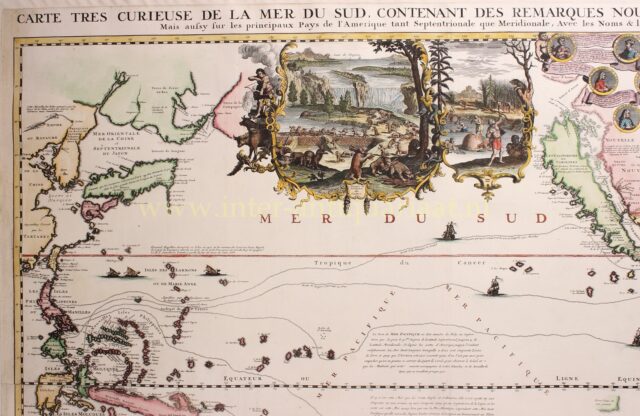 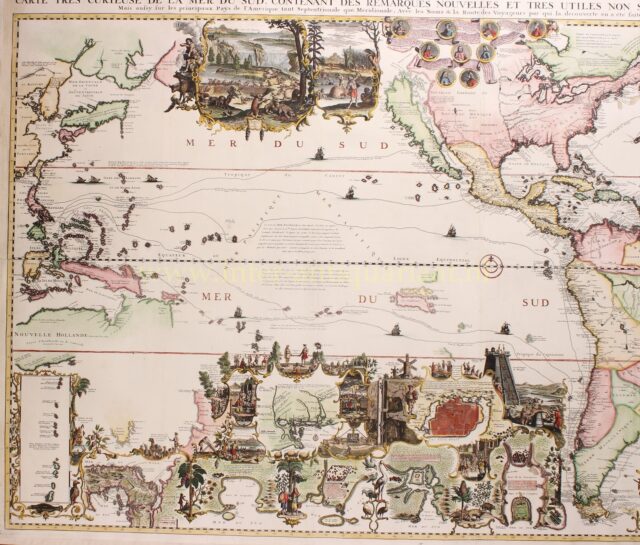 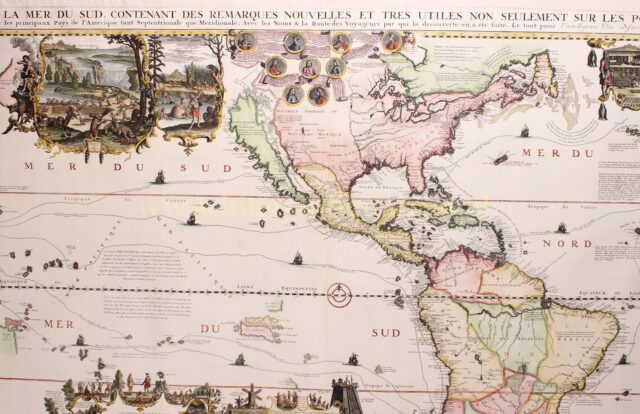 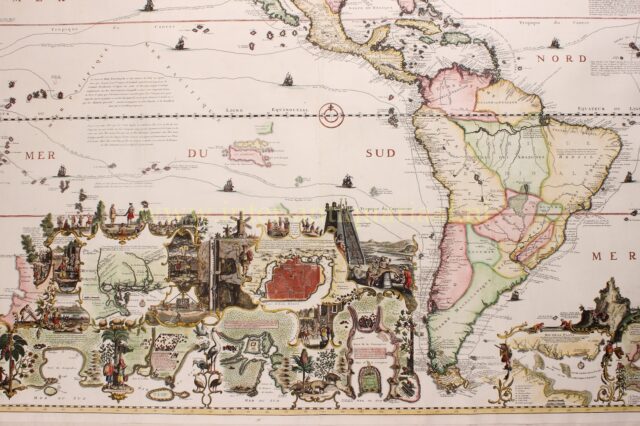 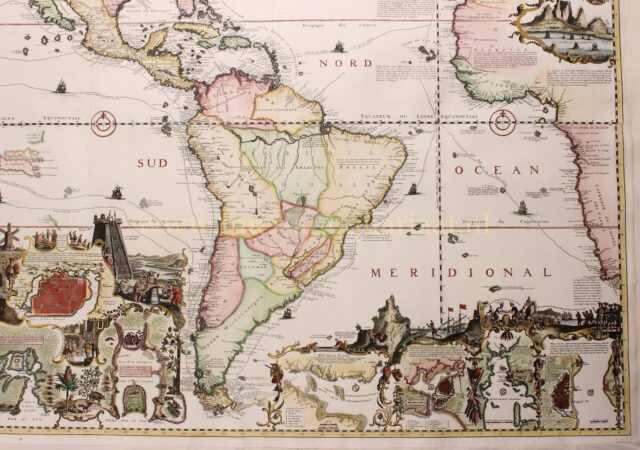 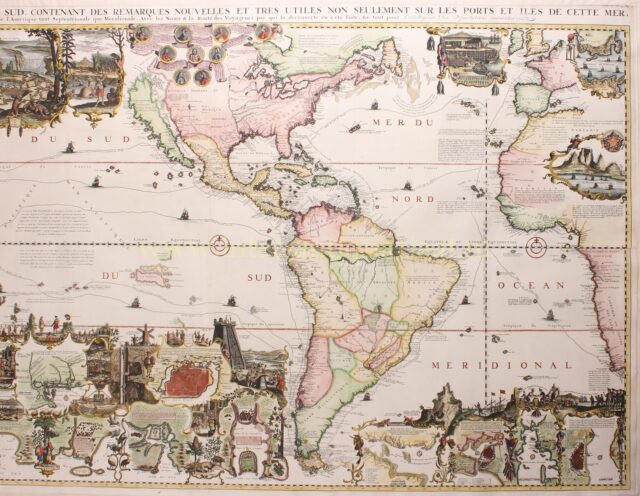 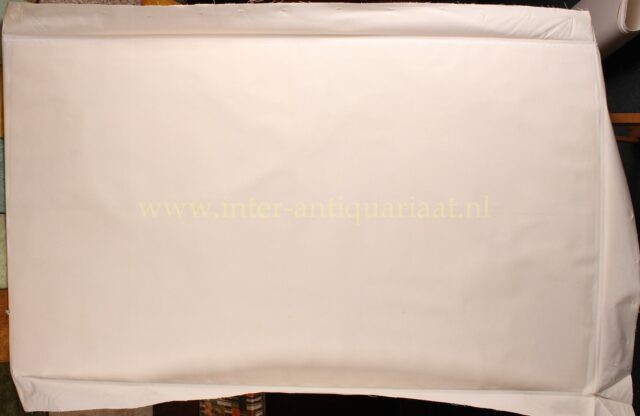 An exceptionally fine copy of “one of the most decorative and impressive maps of the Americas [and] …a veritable pictorial encyclopedia of the western hemisphere” (Goss). “One of the most elaborately engraved maps of the Western Hemisphere ever produced” (Schwartz & Ehrenberg). This monumental masterpiece is one of the most celebrated expressions of artistic cartography ever produced.

Depicting the Americas and the entire Western Hemisphere, it was the most important map of Châtelain’s encyclopaedic Atlas Historique. With maps devised by Châtelain and text by Nicholas Guedeville, it was published in seven folio volumes. This map appeared in the sixth volume as indicated by the notion in the upper right corner. The objective of Châtelain’s opus was to arouse the reader’s curiosity regarding matters of geography, cosmography, topography, heraldry and ethnography; and this map dramatically achieves this goal, as a visual tour de force epitomises the exciting ethic of the age of discovery.

The text includes descriptions of their achievements, and the map features the tracks of their great voyages of discovery, as well as the route of the Manila galleons that the Spaniards used to transfer precious cargo between the New World and Asia.

The most striking features of the map are the series of large vignettes, magnificently bordered with proto-rococo motifs, that portray scenes of commerce and exotic ritual in the New World.

The scene depicted in the upper left is derived from Nicolas De Fer’s legendary so-called “Beaver map” and features the industrious creatures at the foot of Niagara Falls, while the area to the right contains a native hunting scene.

The decorative cartouche above the Atlantic depicts the Newfoundland Cod fishery, and the vignettes in the adjacent corner showcase the Straits of Gibraltar and the Dutch trading post at Cape Town, with Table Mountain in the background.

Surmounting these maps are illustrations relating to Hernán Cortés‘ landing in Mexico in 1519 and the mining of the mountain at Potosí, Bolivia, the largest source of silver ever discovered. The most sensational expression of artistry on the map embellishes the southern Pacific, featuring a grand series of interconnected cartouches.

A map of Mexico City is accompanied by a grand portrayal of the Aztec Temple of the Sun, and is surrounded by cartographic insets of important New World harbors and depictions of exotic animals such as opossums, armadillos and wild boar.

To the left is a map of Louisiana, recently settled by the French, surmounted by a scene of a native Canadian wedding and various American activities such as Night Hunting and sugar refining. Maps of the Isthmus of Panama and the Windward Islands of the Caribbean are featured in the lower left corner.

Geographically, the map provides a fascinating view of the world before the great wave of exploration that occurred later in the century. Curiously, while the map shows California to be an island, it is also one of the first maps to dispel the insular myth in light of father Eusebio Kino‘s discoveries. The map also features numerous missions recently founded in the region. Elsewhere in North America, the Rio Grande is well delineated, but has its source in the mythical Lake Conibas. The Mississippi Basin and the Great Lakes are well depicted as a result of French exploration, but the canoe route from Georgian Bay to Montréal is shown as a single massive river, whilst actually it was far less direct and replete with portages.

A mythical series of large islands, including “Guadalcanal“ adorn the mid-Pacific, and New Guinea takes an amorphous shape adjacent to the enigmatic “Terre De Quir“. Australia and New Zealand assume the same partial outline as articulated by Abel Tasman almost a century before. Japan, which was not welcoming to most European explorers, has a very curious appearance, and “Eso“, supposedly Hokkaido, is located far to the north of Honshu as part of the Asiatic mainland.