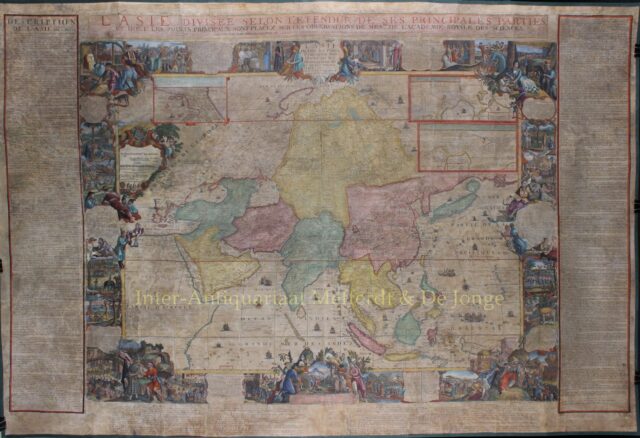 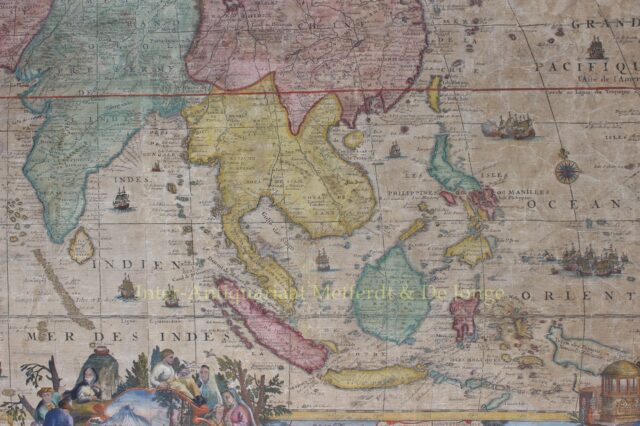 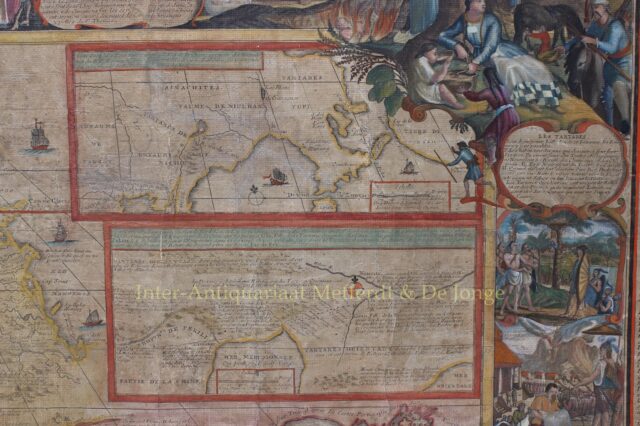 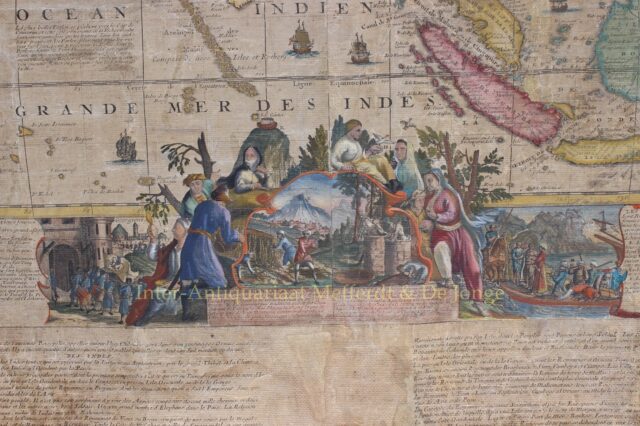 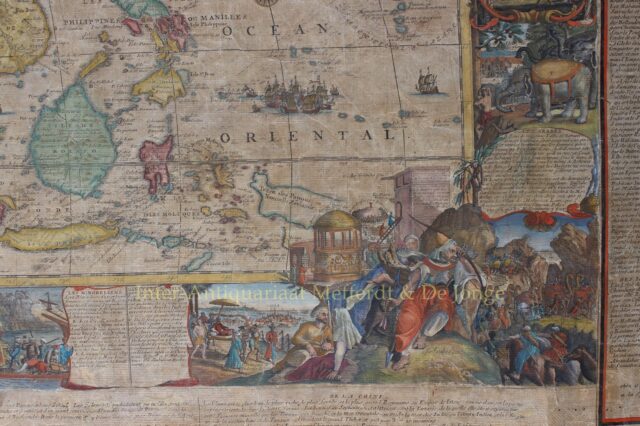 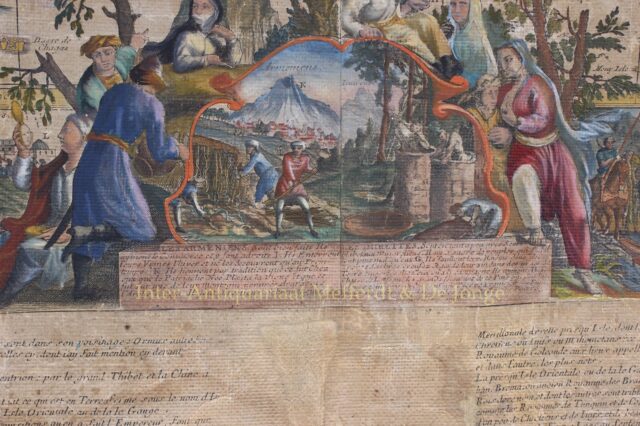 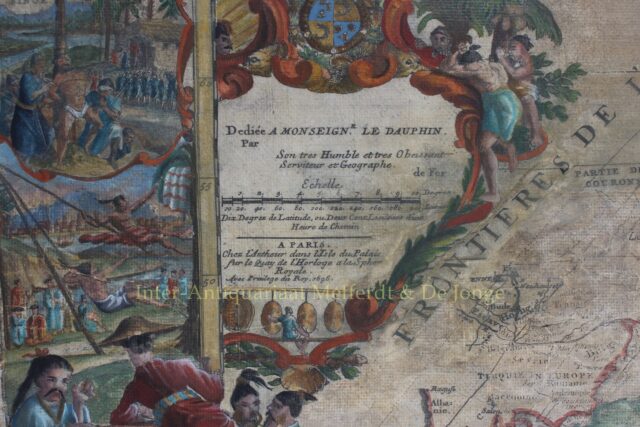 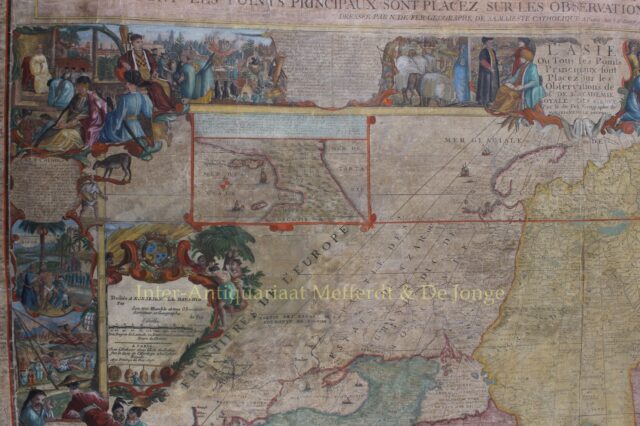 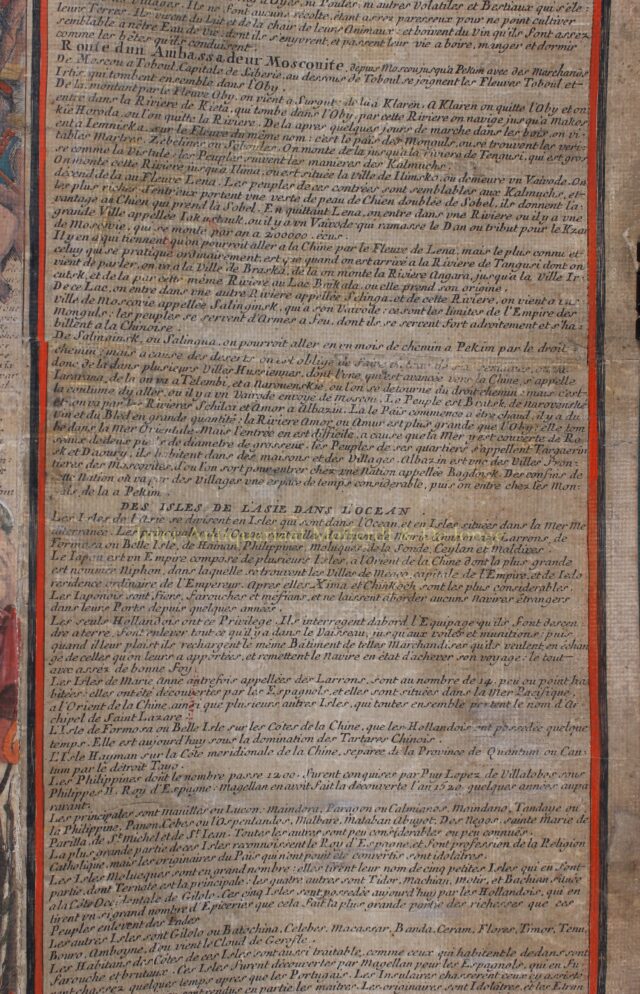 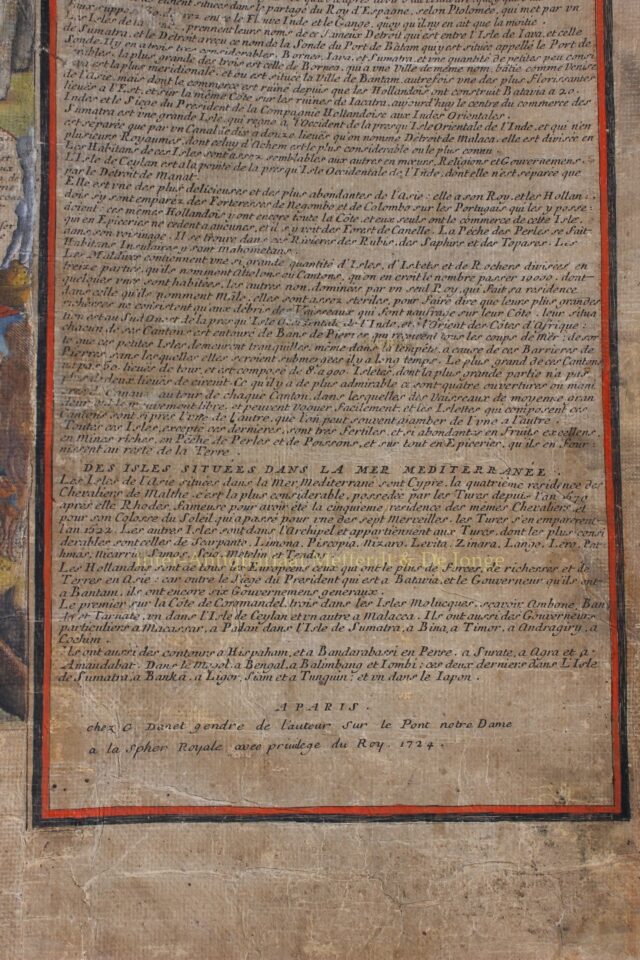 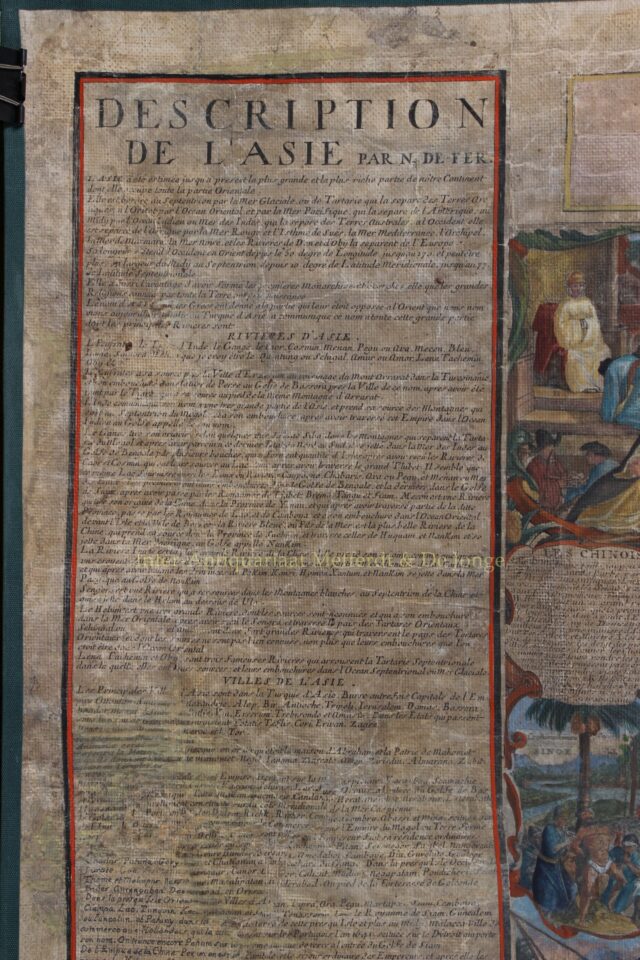 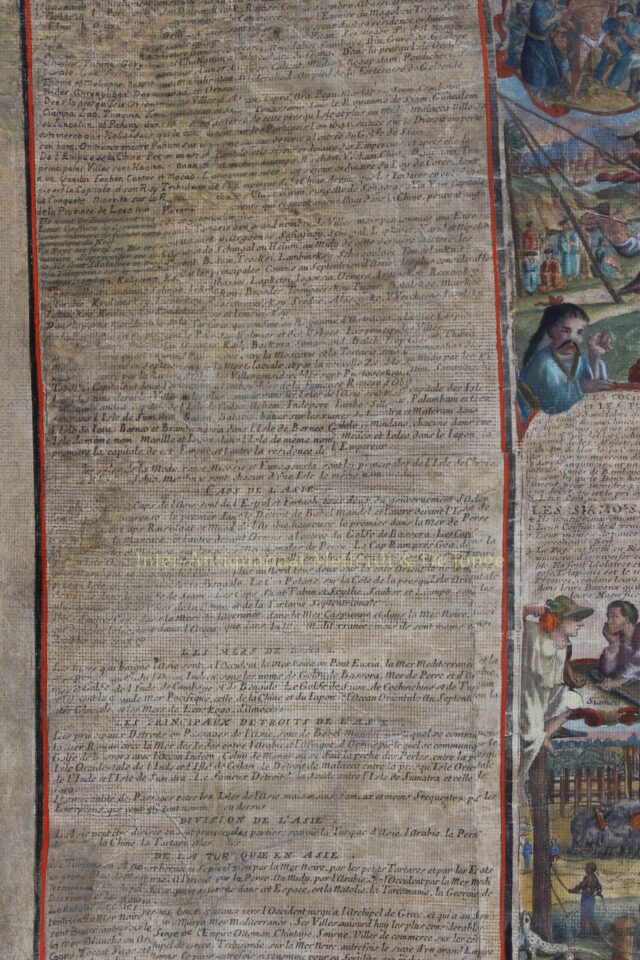 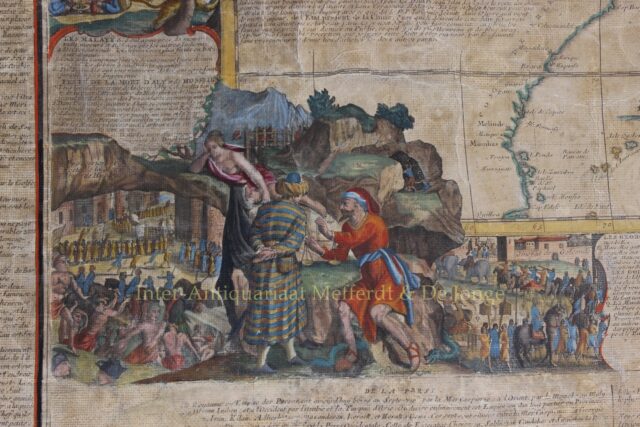 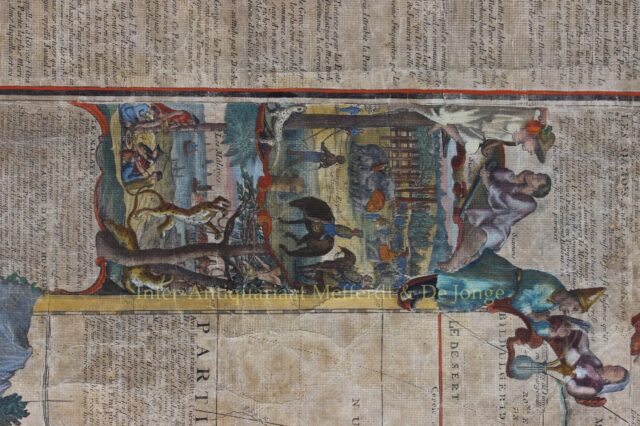 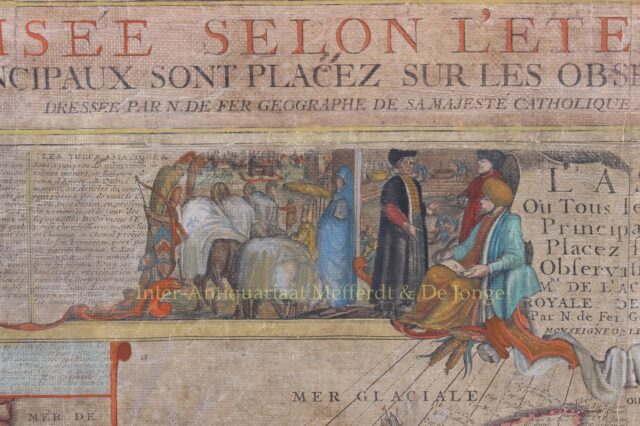 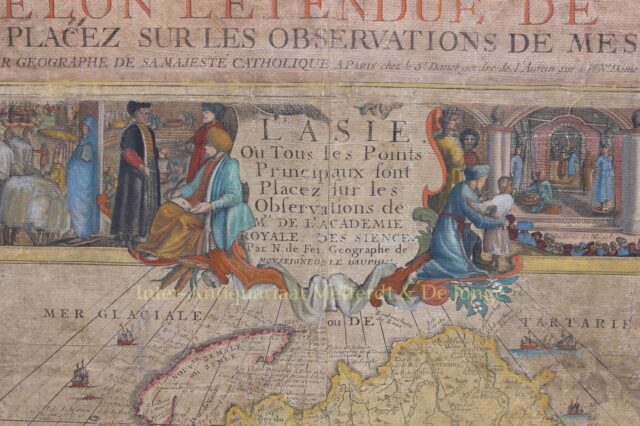 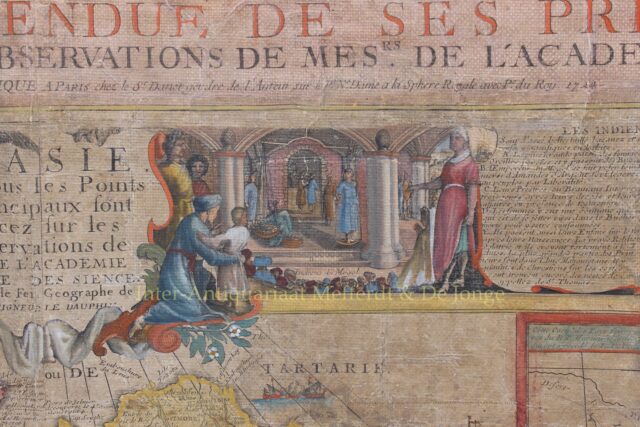 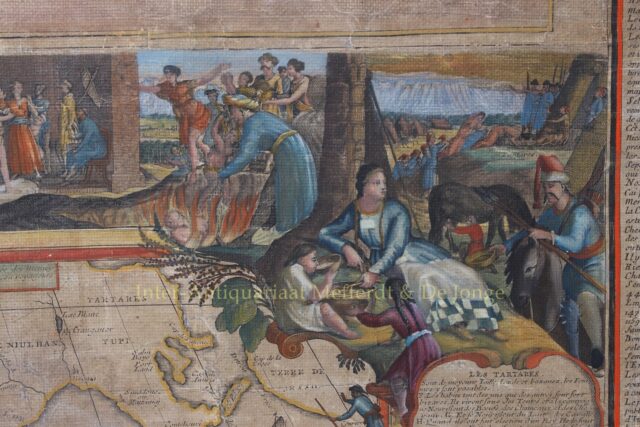 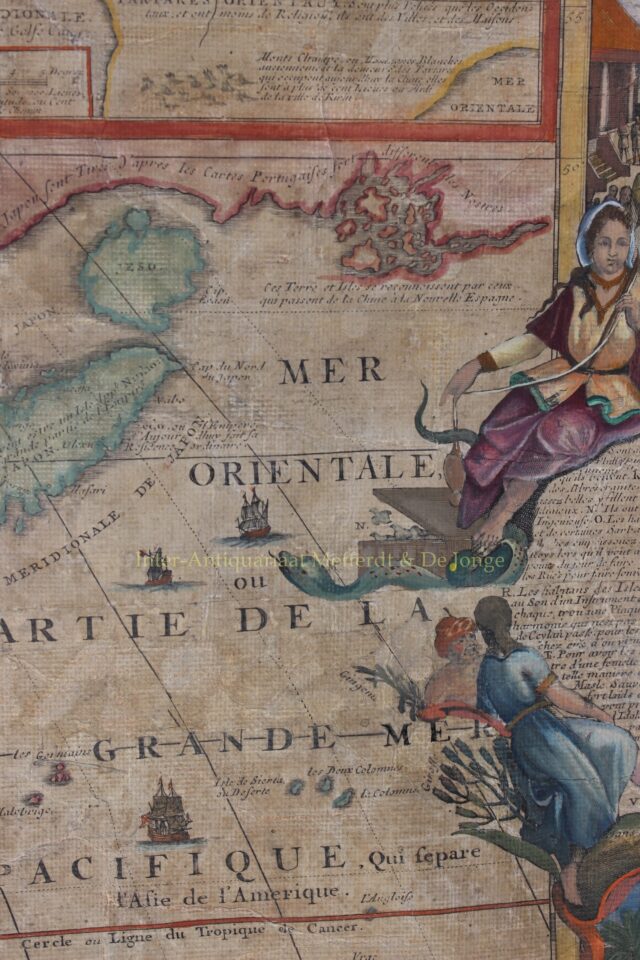 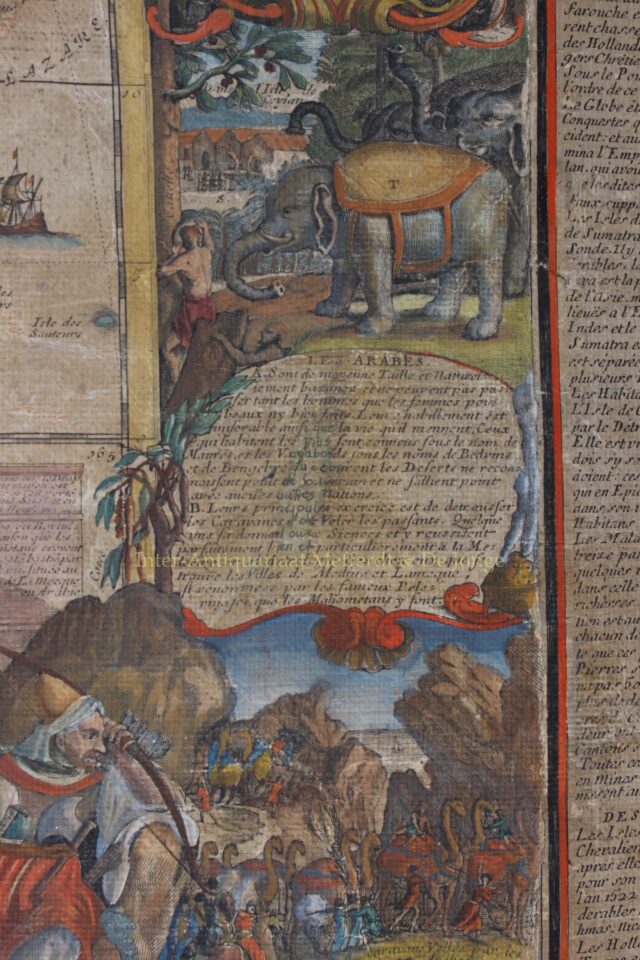 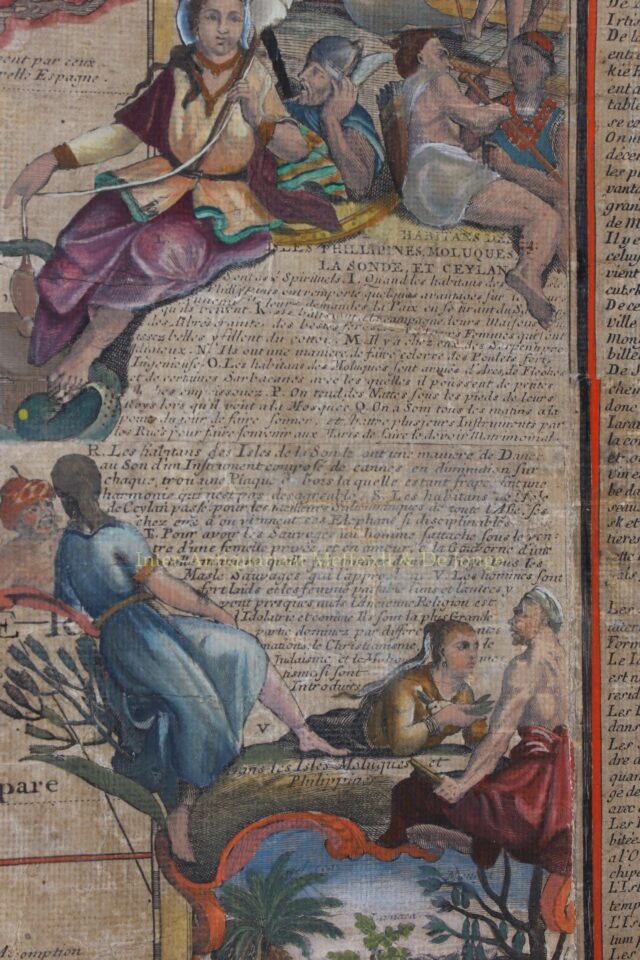 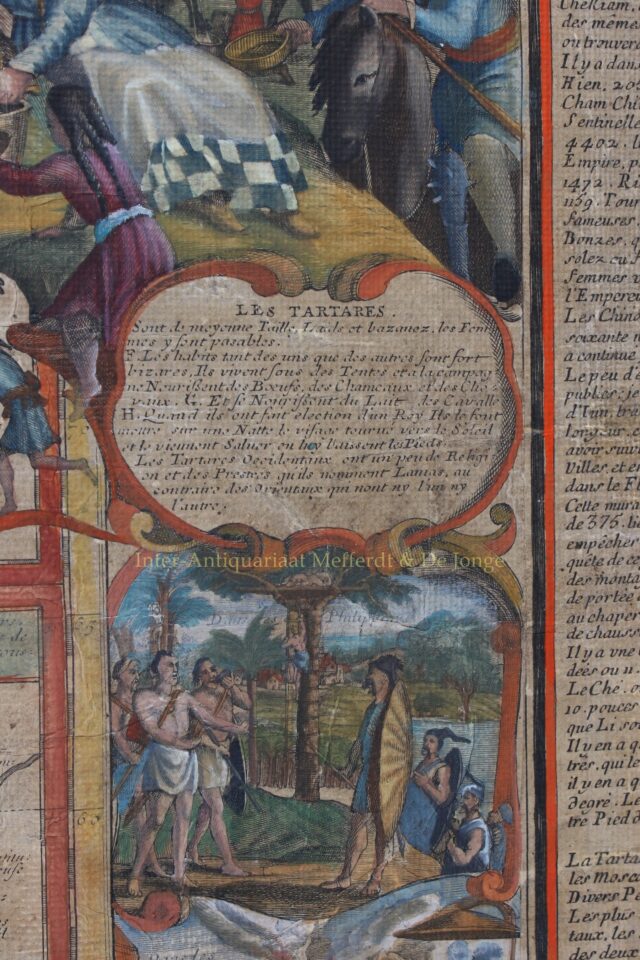 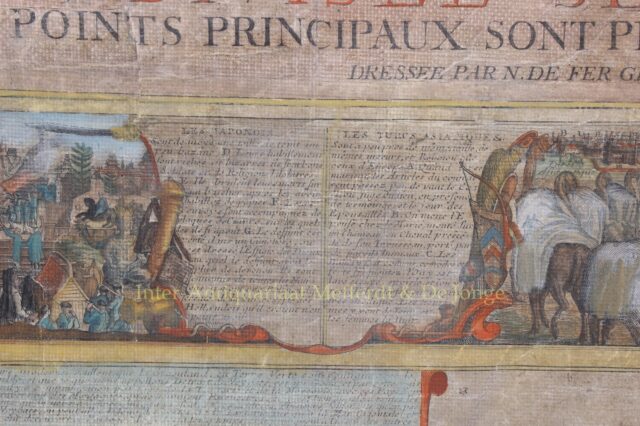 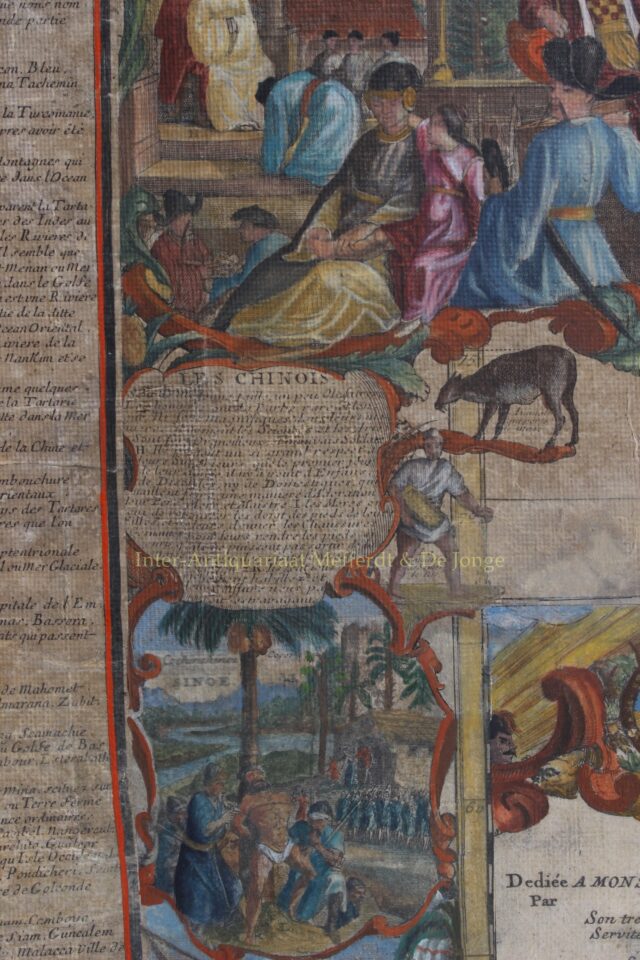 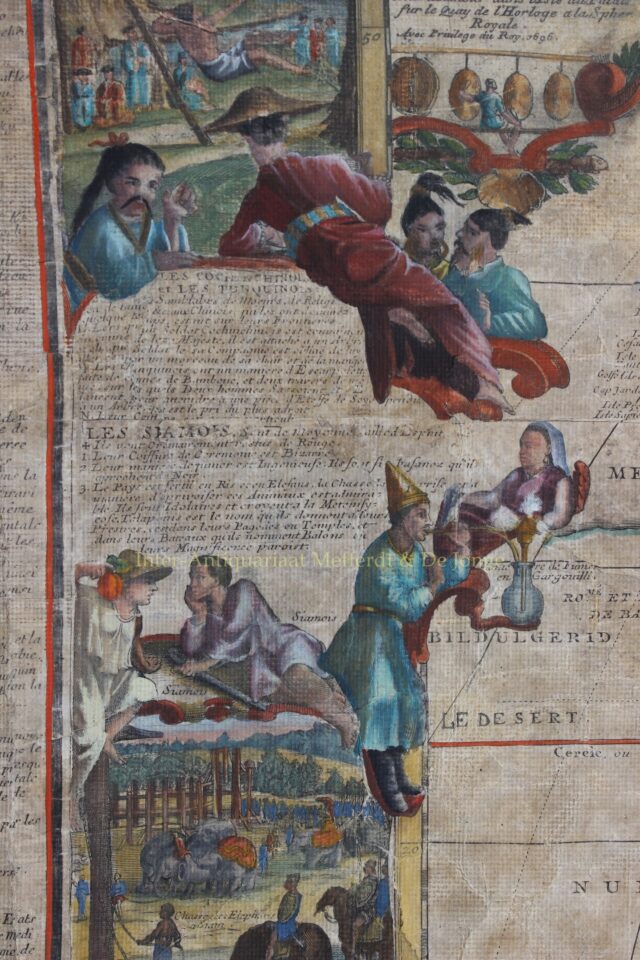 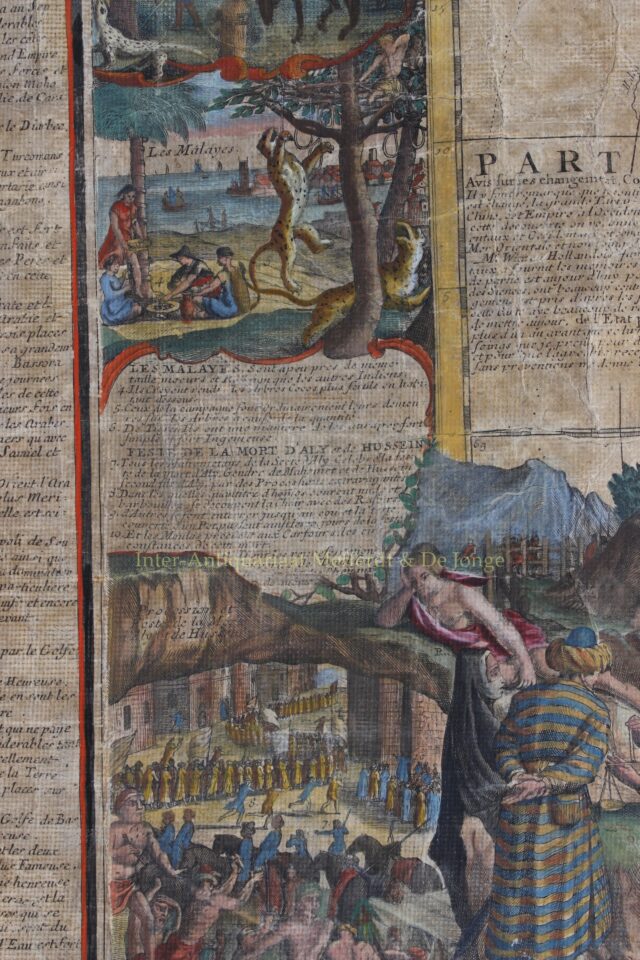 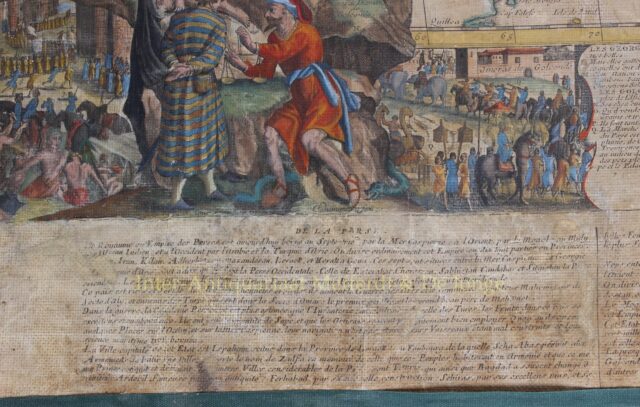 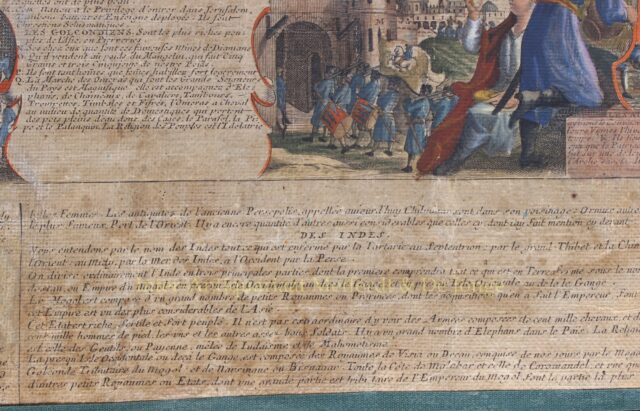 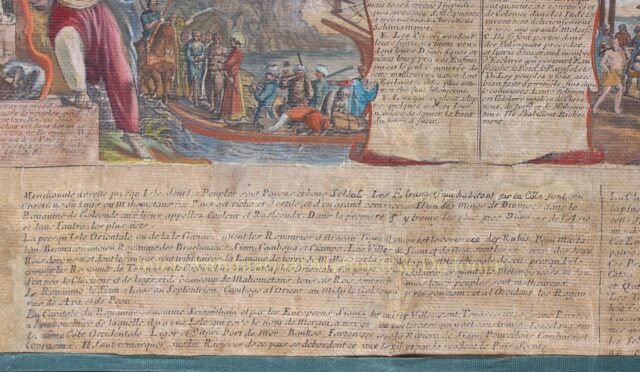 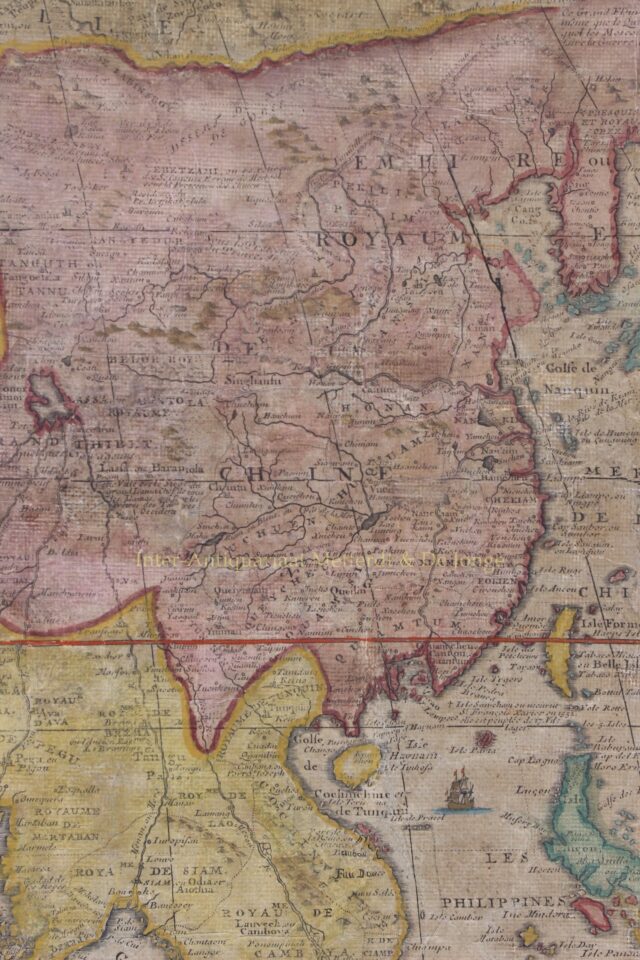 “L’Asie, divisee selon l’etendue de ses principales parties” [Asia, shown according to the extent of its main parts]. Rare copper engraving in 4 sheets made in 1696 by Hendrik van Loon according to the design of Nicolas de Fer, geographer to the king, published in Paris by Guillaume Danet in 1724. With to the left and right 4 more sheets of letterpress borders in French “Description de l’Asie” and title above. Coloured by a later hand. Total size: 106 x 157 cm.

The map is surmounted with a decorative title cartouche “L’Asie Ou Tous les Points Principaux sont Placez sur les Observations des Mrs. De l’Academie Royale des Sciences.” [Asia where all main points indicated are based upon the observations of the gentlemen of the Royal Academy of Sciences.] The cartouche to the left dedicates the map to [of course] Louis of France, Le Grand Dauphin.

There are detailed inset maps of the Artic area around Spitsbergen and Nova Zembla and two of northeast China, based upon the memoires of the Jesuits Martino Martini and Ferdinand Verbiest.

The rare [!] letterpress description explains about the geography of Asia in general with its rivers, towns, capes, lakes and straights, as well as more in detail about Turkey, Arabia, China, Persia, India, Russia, and “the islands of Asia in the Ocean”.

Nicolas de Fer was one of the foremost French cartographers of the late-17th century who had encompassed the most decorative elements of French map making for this great piece of work. In his early career, de Fer is better known for producing small atlases on Europe and France but in 1690 he became the official geographer to the Dauphin, later geographer to the French and Spanish kings. In the 1690s under the Dauphin’s patronage he issued a series of wallmaps for the nobility of France; in his lifetime some 26 wall maps were issued.

The condition of this piece correlates to size and age: it has overall browning and numerous cracks and tears to margins and image, The sheets of paper are mounted on linen.