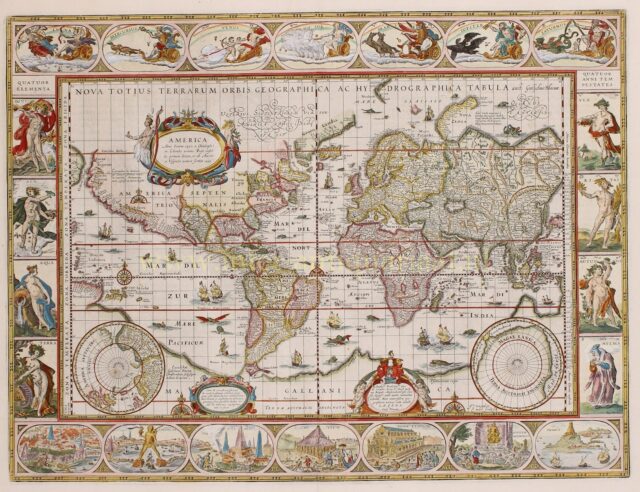 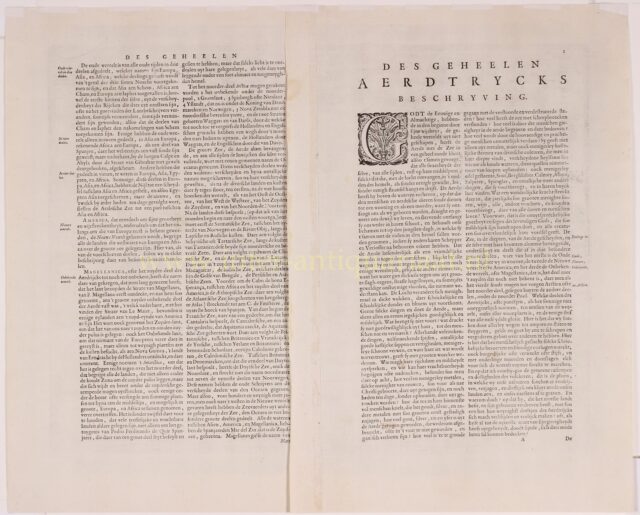 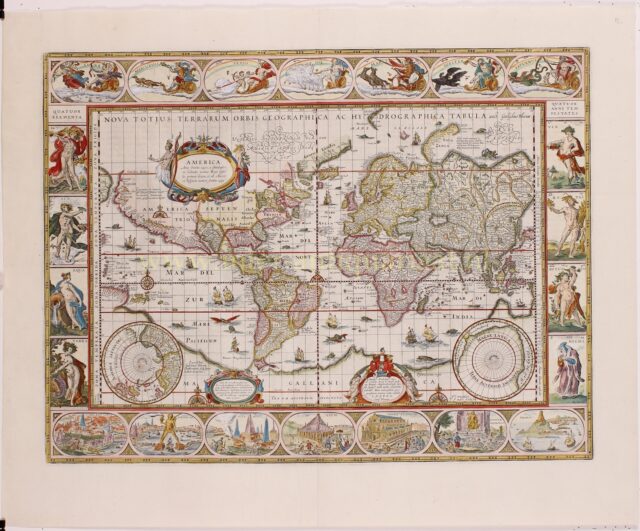 Nice example of Blaeu’s classic world map in the so-called Mercator projection. This is one of the most famous landmarks of 17th-century cartography. Engraved and signed by Joshua van den Ende, reduced from Blaeu’s wall map of 1605, it first appeared as a separate publication in 1606. In 1630 it was incorporated into Willem Blaeu’s “Atlantis Appendix” and then into the “Atlas Novus” in all subsequent editions until 1658. Its influence was enormous, and it was closely copied by some of the greatest Dutch cartographers, such as Pieter van der Keere and Johannes Janssonius. Others, such as the house of Hondius, were forced to produce their own highly decorative maps to compete.

Geographically, the map was a reduction of Blaeu’s large map of the world published in 1605. The charming cartouche in the interior of North America mentions its discovery by Columbus in 1492 and being named after Amerigo Vespucci in 1499. There is some confusion in the depiction of the landmass of the East coast of the United States, probably as a result of Indian reports of large bodies of water inland, almost certainly the Great Lakes. California is correctly shown as a peninsula. The Le Maire straits, separating Tierra del Fuego from South America, copied from an earlier map by Hondius, are clearly shown. In the north, a note beside “Nova Zembla” in the Arctic declares that it was reached by Willem Barentsz in 1596. In the Far East Korea is shown as an island and northern Australia is shown without any place names.

Decoratively the most striking features of this map are the magnificent and innovative panelled borders. The upper border shows allegorical figures of the sun and moon and the five known planets; Mercury, Venus, Mars, Jupiter and Saturn. Along the bottom border are depictions of the seven wonders of the ancient world; the Hanging Gardens of Babylon, the Colossus of Rhodes, the Great Pyramid at Giza, the Mausoleum at Hallicarnassus, the Temple of Artemis at Ephesus, the Statue of Zeus at Olympia and the Lighthouse of Alexandria. Running down the left hand side of the map are representations of the four elements (Fire, Air, Water and Earth) and on the right, the Four Seasons.

In the cartouche in the lower right Blaeu dedicated the map to Cornelis Hooft, the Dutch merchant and Amsterdam regent during the Golden Age. .

Reference : Rodney Shirley “The Mapping of the World’, no. 255