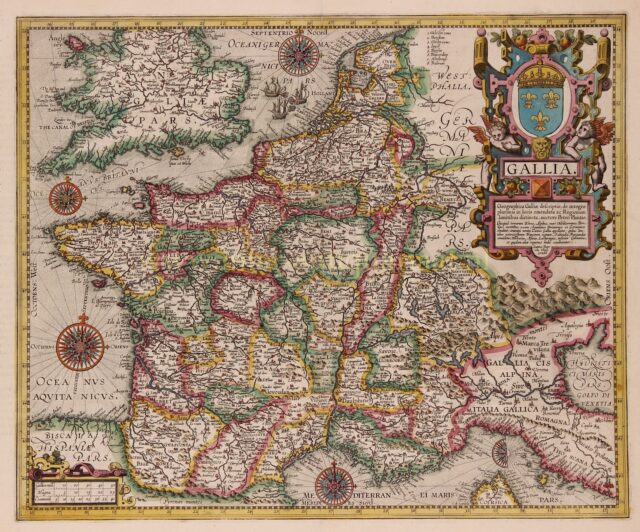 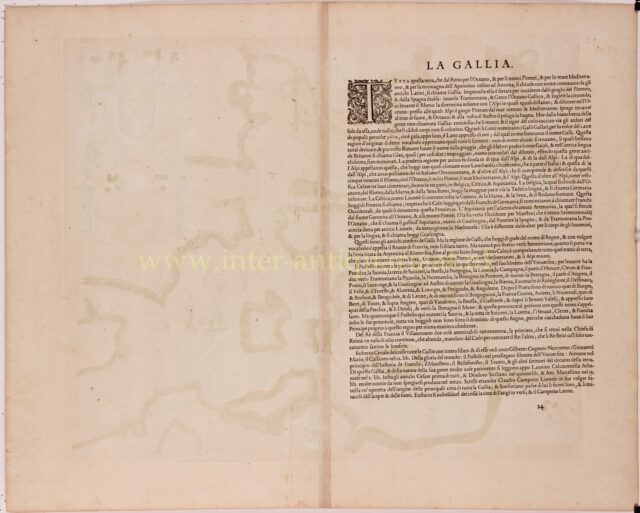 “Gallia” [Gaul] copper engraving made by Baptista van Doetecum, first published in 1592 by Cornelisz. Claesz., then by Johan Baptist Vrients, and in this case by Arbaham Ortelius in 1606 as part of his atlas “Theatrum Orbis Terrarum” [Theatre of the World]. With original hand colouring. Verso: Italian text. Size: 40 x 48,6 cm.

The cartouche mentions that this is a “geographical description of Gaul, newly revised in many places, and with distinct boundaries of the limits of the regions. Made by the authority of Petrus Plancius [who drew the map in 1592].

This land is bordered by the Rhine, the Alps, the Mediterranean Sea, the Pyrenees Mountains, the British and Germanic Aquitanian Ocean; the Romans commonly called it Gaul; within its limits are confined today: the most powerful Kingdom of the Franks, Savoy, the Counties of Burgundy, Helvetia, Alsace, Lorraine, Low Countries, and certain other regions.”

The map was map in the time of the French Wars of Religion, a period of civil war between French Catholics and Huguenots. Estimates suggest between two to four million people died from violence, famine or disease directly arising from the conflict.

Abraham Ortelius (1527 – 1598) was an Antwerp cartographer, geographer, and cosmographer. His Theatrum Orbis Terrarum is considered to be the world’s first modern atlas. The publication of his atlas in 1570 is often reagarded as the official beginning of the Golden Age of Dutch cartography.