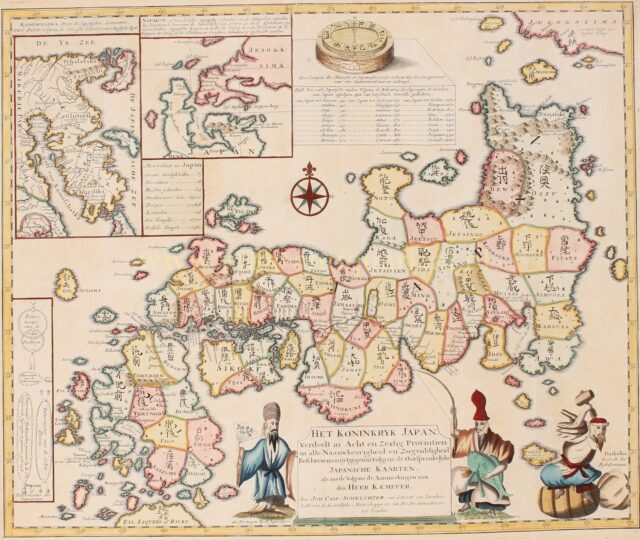 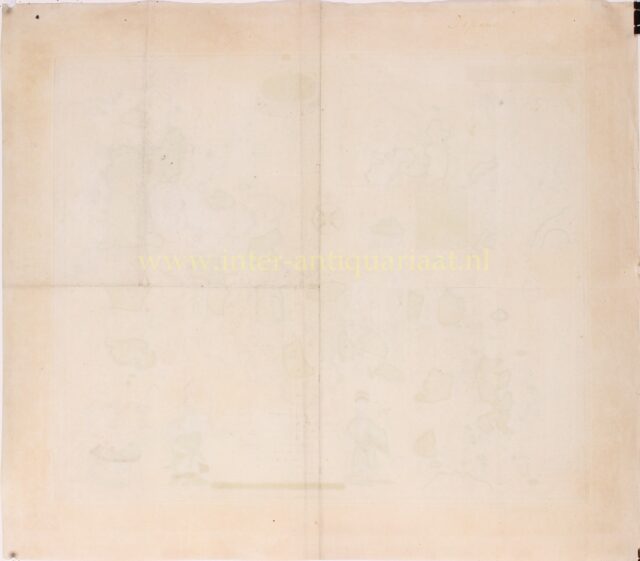 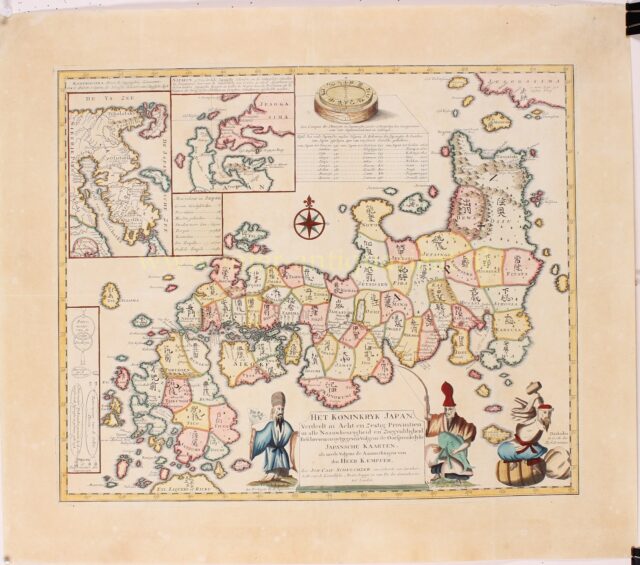 We see the Japanese Empire with seven major regions that are subdivided into 68 provinces. The provinces in turn, are made up of 604 ‘counties’. Cities there were more than 13.000 and 146 castles.

In the 17th and 18th centuries, only Chinese and Dutch ships were allowed to enter Japan, and Nagasaki (on the far left of the map) was the only port they were allowed to enter. The Dutch stayed on Deshima, an artificial island in the harbour. Engelbert Kaempfer (1651–1716), a German scholar and traveller, who was employed by the Dutch East India Company (VOC) between 1690 and 1692, lived there as a physician in the Dutch trading post on Deshima. His travelogue was published after his death, it was the main source of knowledge about Japan until the 19th century.

Below the map image there is Tossitoku (also known as Fukurokuju or Fukurokuziyu), one of the gods of fortune, recognizable by his beard and very high head. He is holding a fan. He bestows wisdom and prosperity. We also see the sea god Ebisu with a fishing rod in one hand and a bream (symbol of good luck) under the other arm. He brings good luck to fishing and is god of prosperity and of the kitchen (food). At the bottom right there is Daikokuten, god of wealth, but also of the kitchen. He provides the people with food. He sits on a bale of rice and swings his lucky hammer, the uchide-no-kozuchi. Everything he hits with his hammer spontaneously turns into abundance.

At the top of the print we see an image of a “sea compass of the Chinese and Japanese, known before the Europeans and of excellent use”. Europeans in the 18th century were impressed by the accuracy of the Chinese compass, which had been used at sea as early as the 12th century. European navigators did not use a compass to determine direction until the 14th century.

In the top left a map of the Russian Kamchatka Peninsula with “Kurilsky” (Kuril Islands) in the south. Even in the 18th century, there was uncertainty about which country the Kuril Islands belonged to, as is apparent from the cartographer’s caption: “perhaps a colony of the Japanese”.

At the bottom left we see prayer beads of the different religions, “sects”, according to the author.