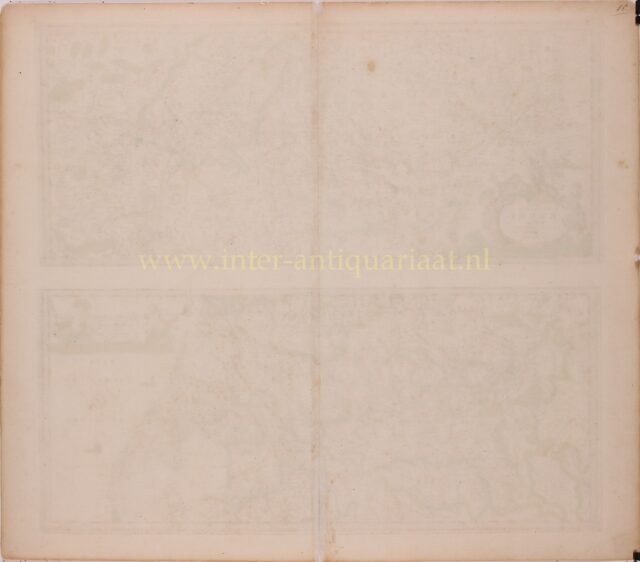 Two maps one sheet, one above the other, charting the course of the Rhine River. The river sources in the Swiss canton of Graubünden in the southeastern Swiss Alps. It forms part of the Swiss-Liechtenstein, Swiss-Austrian, Swiss-German borders. After that the Rhine defines much of the Franco-German border, after which it flows in a mostly northerly direction through the German Rhineland. Finally in Germany the Rhine turns into a predominantly westerly direction and flows into the Netherlands where it eventually empties into the North Sea.

The Rhine (and the Danube) comprised much of the Roman Empire’s northern inland boundary, and the Rhine has been a vital navigable waterway bringing trade and goods deep inland since those days. As such it played an important role in shaping the history of Europe. Various castles and defenses were built along it in the time of the Holy Roman Empire.

The title cartouche is flanked by Mars the god of war, and Bacchus the god of grape-harvest and wine, as well as Pheme (the personification of fame and renown) and a putto holding a cornucopia. A second cartouche adds a mermaid and Rhenus Pater [Father Rhine], the personification or the river god of the Rhine. Frequently attested in epigraphy and associated with Neptunus, called “father of nymphs and rivers”.