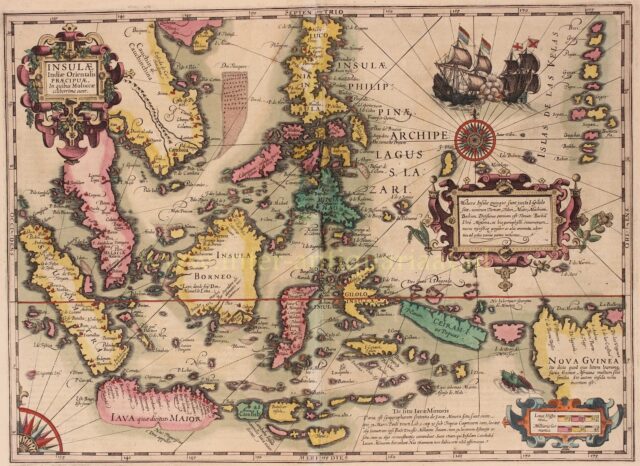 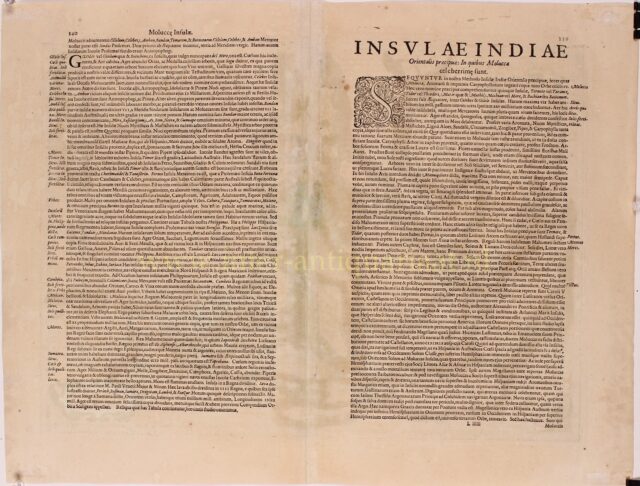 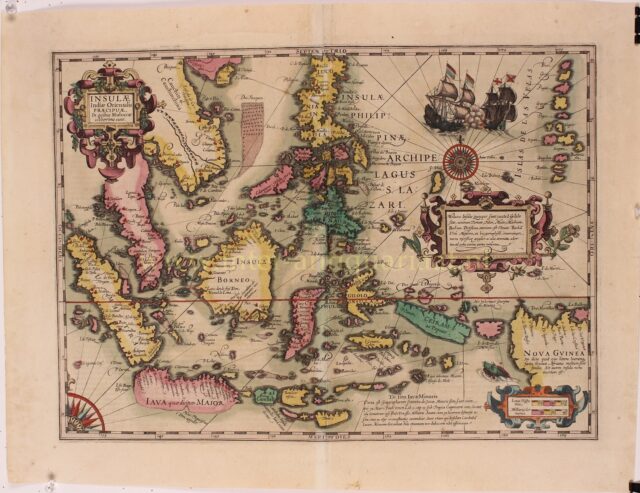 DECORATIVE MAP OF THE EAST INDIES

Striking and highly decorative map of the East Indies from the Mercator-Hondius Atlas. It extends from the Philippines to Timor and Sumatra to New Guinea, detailing the Spice Islands, a region of great importance to seventeenth century Europe, but one about which little was known at the time.

This map follows very shortly the extension of Dutch control over the islands. In 1602 the Dutch East India Company (VOC) was formed, and within a couple of decades the company came to control the region.

The sandbanks and shoals around islands are marked, as are major settlements on the islands. A decorative text box in the sea east of the Philippines proclaims the rich spices available on the Moluccas Islands, including cinnamon, nutmeg, cloves, and ginger.

In the lower right corner next to the scale, is a note about Java Minor, discussing the various locations chosen for the island by geographers. Java Minor was first mentioned in European literature in the Travels of Marco Polo. Polo identified Java Minor and Major; the first referred to the island of Sumatra (or Sumbawa) and the latter described Java as the largest island in the world. However, due to a scribal error in Book III of Polo’s Travels, Java Minor was recorded as 1,300 miles south of Java Major. This caused confusion and debate on the part of geographers until the early eighteenth century with some using the name Java Minor (Petite Jave) for New Holland and others choosing it for Sumatra, Sumbawa, or Java.

Marco Polo is not the only explorer mentioned on the map. Of particular note is the comment “Huc Franciscus Dra. Appulit”, which appears by the unknown southern coast of Java, representing Francis Drake‘s landing during his circumnavigation in 1577-80. Hondius knew of Drake’s voyage first hand, as he was a religious refugee in London from 1583 to 1592 and an acquaintance of the navigator.

Dutch and English ships are in the midst of battle shown on the map east of the Philippines. A visual representation of how hotly contested this area was in the early modern period.

Another historical note is in the interior of Borneo, a cross marking one of the places traversed by the Portuguese Dom Manuel de Lima. Therewith revealing Hondius’ Portuguese source, the portolan charts of Portuguese cartographer Bartolomeu Lasso.

The Portuguese were some of the first Europeans to exploit the resources of the Spice Islands. They were joined by the Spanish, who were interested in stretching their empire from the eastern to the western Pacific. The Moluccas, as discussed in the text box on the map, were considered of particular value, as they were the world’s only source at the time for nutmeg and cloves. Spain and Portugal eventually agreed to grant Portugal control of the Moluccas in the Treaty of Zaragoza in 1529, but the islands remained hotly contested for the next two centuries.

By the early seventeenth century, the Dutch and English were jockeying for position in the region. In response to the Dutch Revolt, the Spanish King Philip II closed the Lisbon spice market to Dutch and English traders in 1585, spurring both countries to seek direct trade with Asia. The English East India Company was founded in 1600, followed in 1602 by the Dutch East India Company. More heavily capitalized than its English counterpart, the VOC aggressively moved into areas of Portuguese influence. This map reflects that Dutch influence at its impetus.

Jodocus Hondius (1563-1612) was the founder of the famous 17th century Dutch map publishing family. Hondius, along with sons Jodocus II and Henricus and son-in-law Jan Jansson, was prominent in Dutch cartography and competed with the emerging Blaeu family map business.

When Jodocus Hondius acquired the copperplates of the Mercator atlas, he prepared this map for inclusion in his “Atlas sive Cosmographicae”.