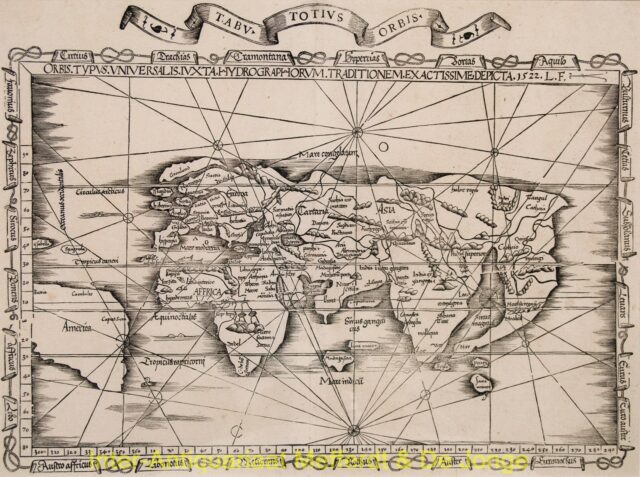 EARLIEST OBTAINABLE MAP OF THE WORLD TO INCLUDE THE NAME “AMERICA”

The majority of the maps in Laurent Fries’ edition of Claudius Ptolemy’s Geographia were reduced copies from the corresponding maps in the edition of 1513 by Martin Waldseemüller. The first of the two modern world maps in the atlas is however Fries’ own rendering which is dated 1522 and is initialled ‘L.F.’ in the main title. Unfortunately Fries has done little more than add further distortion and error to Walseemüller’s rendering.

Europe is very crudely drawn with England and Scotland reverting to separate islands. India is now a double peninsula. South America appears on the map, although largely based upon guesswork, as Ferdinand Magellan would not return to Europe from his circumnavigation until September 1522, several months after this map was first published.  There is no mention of Terra Australis Incognita.

In spite of these imperfections Fries’ map is much sought after as it somehow reflects the ambiguities of his age. A framework of medieval thinking is having to be re-cast in order to accept the extent of the newly ‘discovered’ lands. For decorative value, if not for accuracy, the map has considerable attractions. It is the first, realistically, obtainable map of the world to name “America”.

The map incorporates directional lines crossing the map and an unusual frame of banners which include the names of the winds, each looped with a coil of rope.

Literature: Shirley “The Mapping of the World”, no. 48