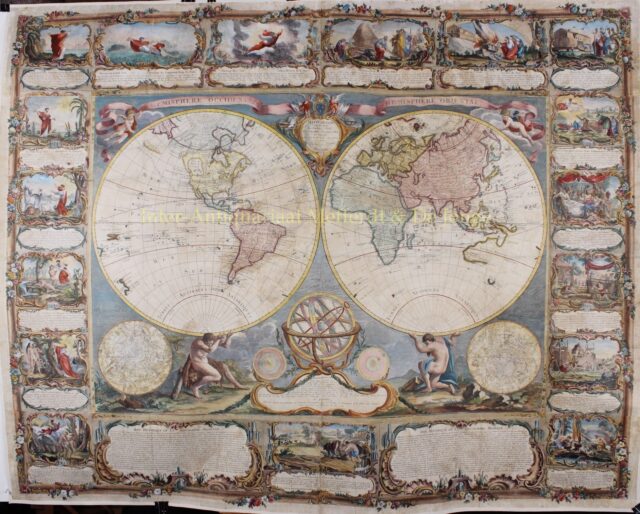 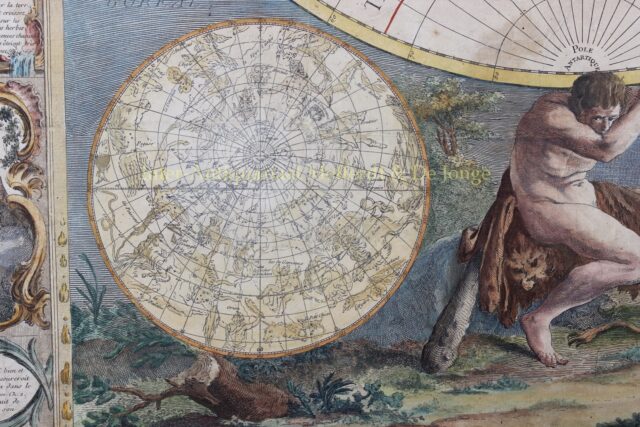 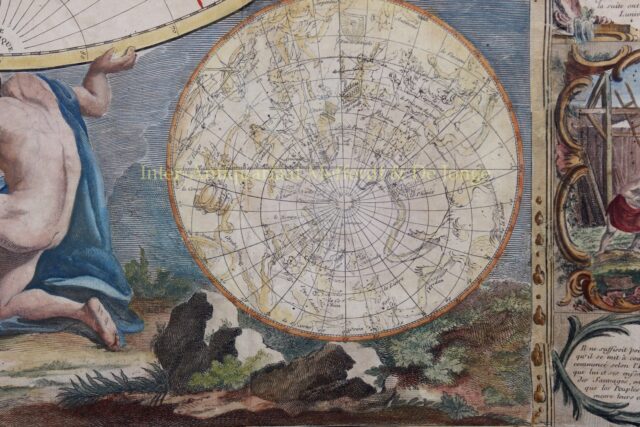 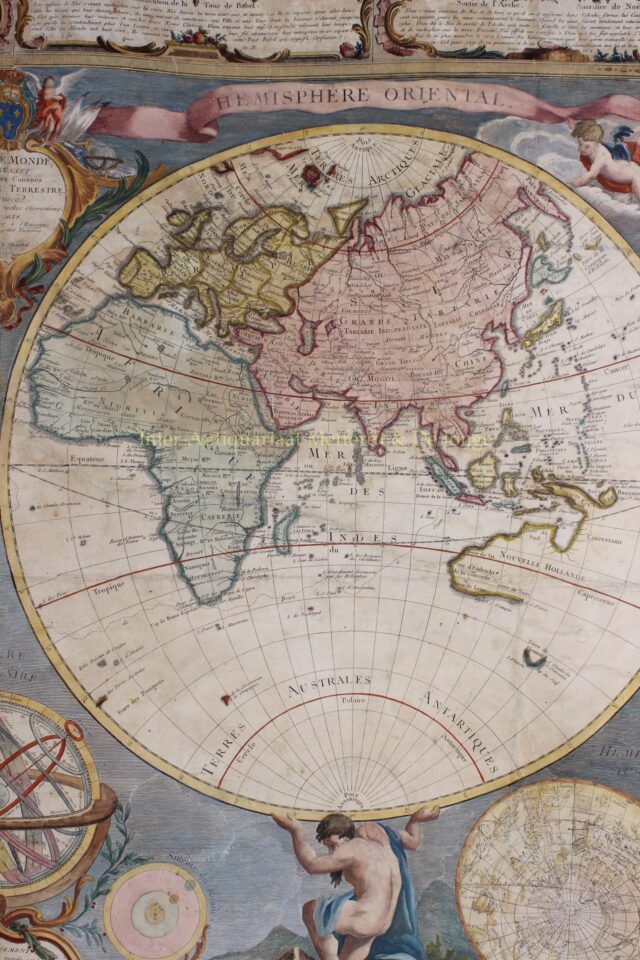 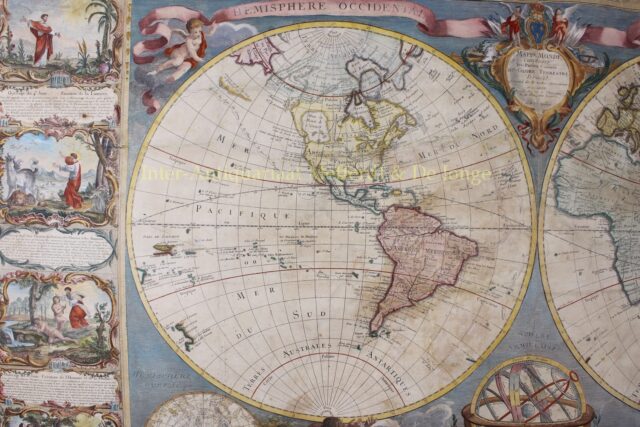 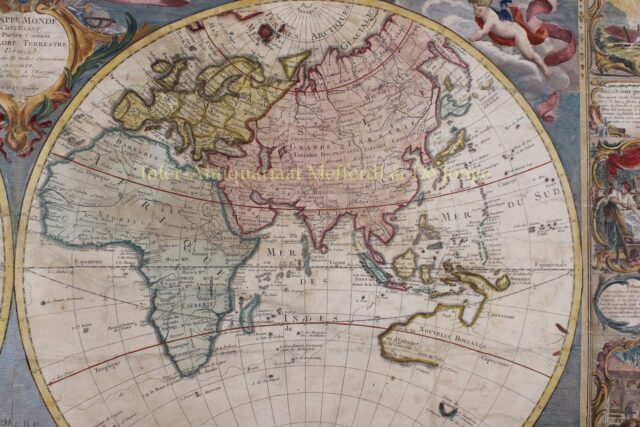 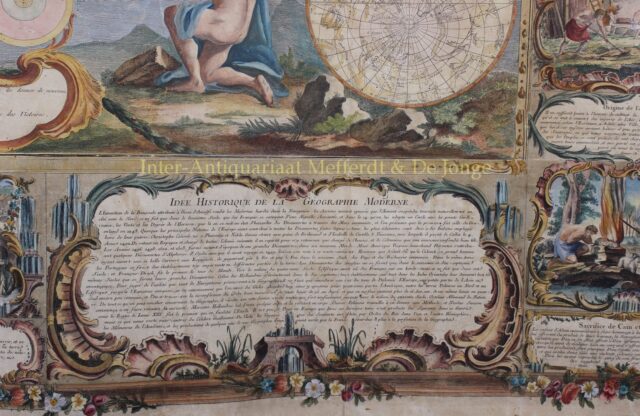 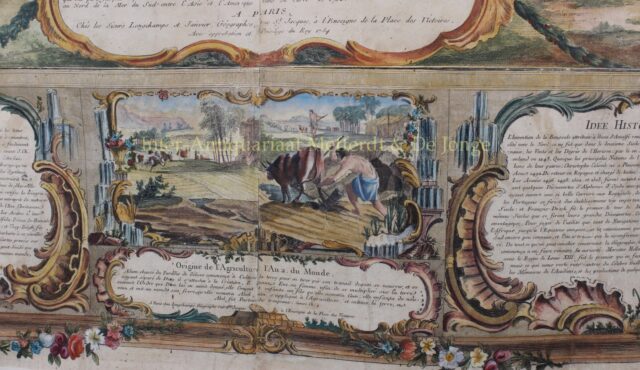 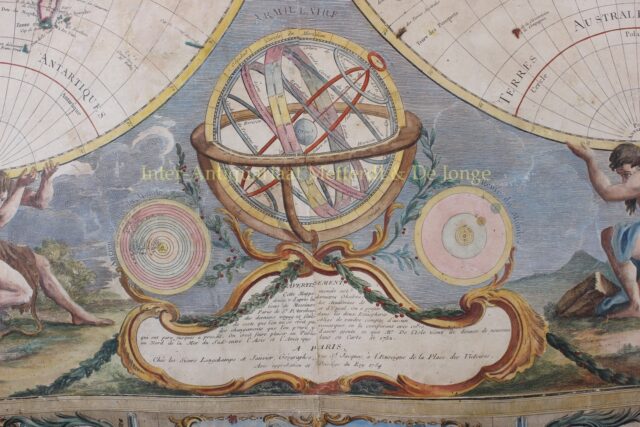 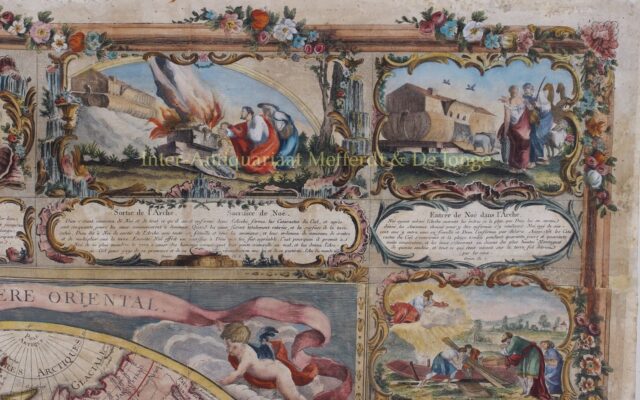 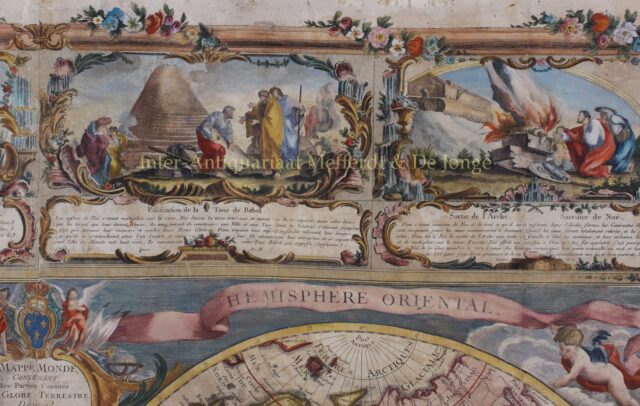 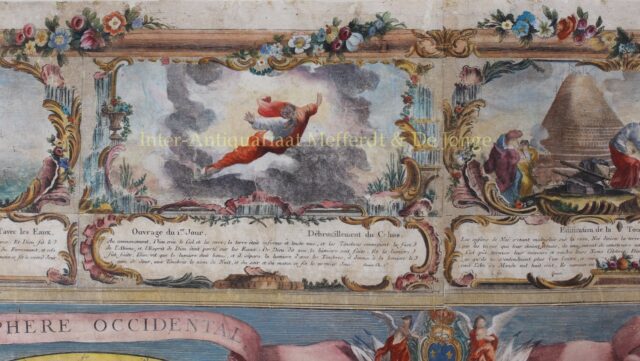 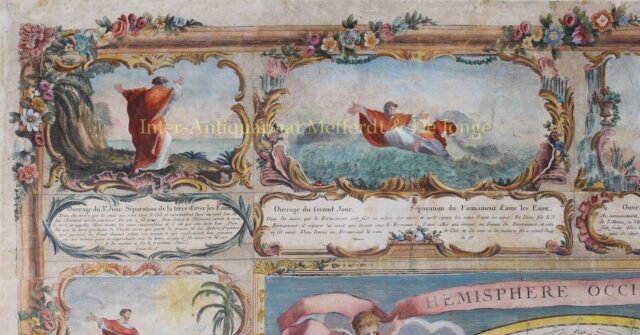 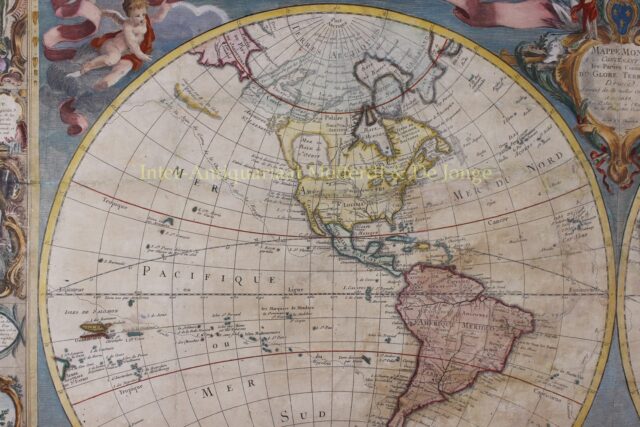 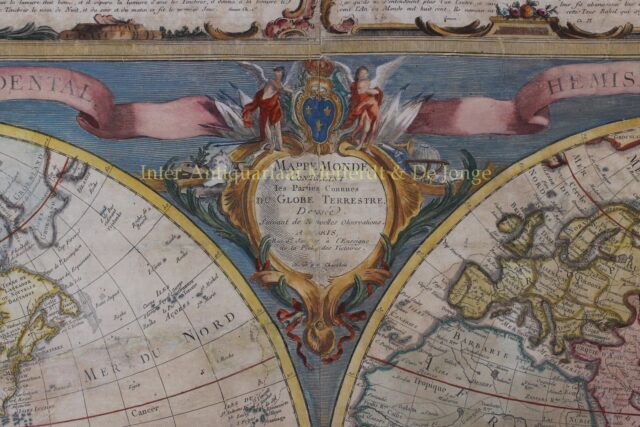 SPECTACULAR WORLD MAP WITH THE STORY OF CREATION

This beautiful world map consists of two hemispheres. The Eastern Hemisphere is being carried by Hercules (with the skin of the Nemean Lion), the Western Hemisphere is carried by Atlas. At the top, title ribbons are held by putti. At the bottom left we see the starry sky from the Northern Hemisphere, in the bottom right there is the sky from the Southern Hemisphere, at the bottom in the middle a so-called armillary sphere in which we see the celestial sphere with the main tropics, as well as images of the Ptolemaic geocentric world system (in which the earth is at the centre and surrounded by the planets) and the Copernican system (in which the earth is only one of the planets of our solar system).

The history of geography is described below the hemispheres. From ancient history to Claudius Ptolomeus and ‘modern’ history with Abraham Ortelius and the world projection by Gerard Mercator and of course Nicolas Sanson. The story ends with the subtle message that it was the French that have contributed most to perfecting geography…

The map is framed by the Biblical story of Creation:

On the first day God divided the light from the darkness. On the second day God made the firmament, and divided the waters which were under the firmament from the waters which were above the firmament. On the third day, God allowed the waters under the heaven be gathered together unto one place, and let the dry land appear. He called the dry land Earth, and the gathering together of the waters He called the Seas. Furthermore, God let the earth put forth grass, herb yielding seed, and fruit-trees bearing fruit. On the fourth day God created the lights in the firmament of the heaven, for sun, moon and stars to mark seasons, days, and years. The great light (the sun) ruled the day, the small (the moon) ruled the night. On the fifth day, God was swarming the water with living creatures and flying birds above the earth. And God blessed them, that the birds and the fish might multiply. On the sixth day, God made the beasts of the earth: the cattle, creeping animals, and wild animals. Then God decided to make man, in His own image, to rule over all other creatures. God first created man and secondly man and woman. And God blessed them with the words: “Be fruitful, and multiply, and replenish the earth, and subdue it; and rule over the fish of the sea, and over the fowl of the air, and over every living thing that creepeth upon the earth”. At the end of this day, God saw every thing that He had made, and, behold, it was good.

In the scene thereafter, we see that Adam and Eve have meanwhile eaten the forbidden fruit. They realised they were naked, they have picked fig leaves and covered themselves with them. Adam and Eve are then chased out of the Garden of Eden. Adam now had to make a living and work on the land, Eve gives birth to two sons Cain and Abel.

Cain killed his brother because God accepted Abel’s animal offering, but not the offering of Cain, part of the crop of the land. Cain therewith is a warning against sin and its consequences, Abel is the very example of a true believer (hence God’s preference for Abel’s offering).In the text box “Origine de l’Architechture” we read how Cain builds a city because people have to shelter themselves. In this way people are not only provided for their needs, but also for their comforts.

Tools and instruments were needed to build houses and cities, Tubal-Cain and his companions were the first to work with iron. The sound of hammering gave them the idea to make music. Humanity has since invented all kinds of arts that produced the luxury and splendor we know today.

But God saw that the people on the earth were bad. Everything they thought up and did was bad. He therefore regretted making the people and decided that He would kill them.

Except for Noah, he was the only one who lived the way God wanted. God told him to build an ark for him and his family and one male and one female of all animals. After which came the Great Flood.

But after a year, the water sinks and Noah sends a bird. The second time the bird returns with a twig. If the dove is sent out again and does not return, all the inhabitants of the ark can go ashore. Noah then makes an offering to God. Then God makes a rainbow appear in the sky, with the promise that the earth will never be destroyed in this way again. We write the year 1657.

Noah’s children multiplied and they said let’s build a city with a tower of which the top rises to heaven. Let us make sure everyone is in awe of us. Then we will not be scattered all over the earth. But then God descended, observing their city and tower, and confounds their speech so that they can no longer understand each other. The construction of the city and the tower were halted. God then spreads the people across the earth. The city was named Babel.