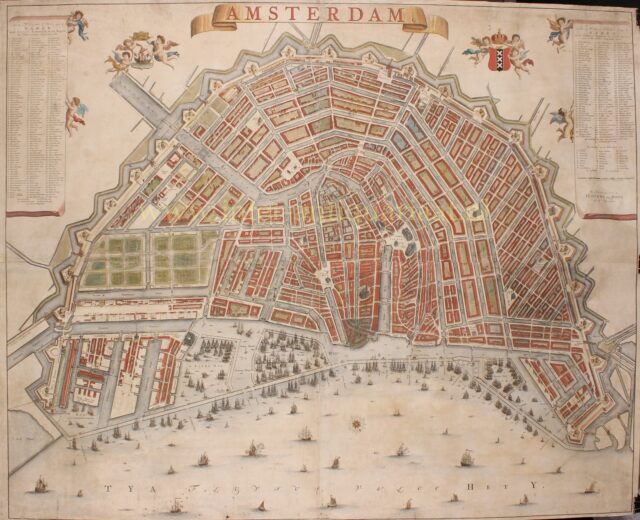 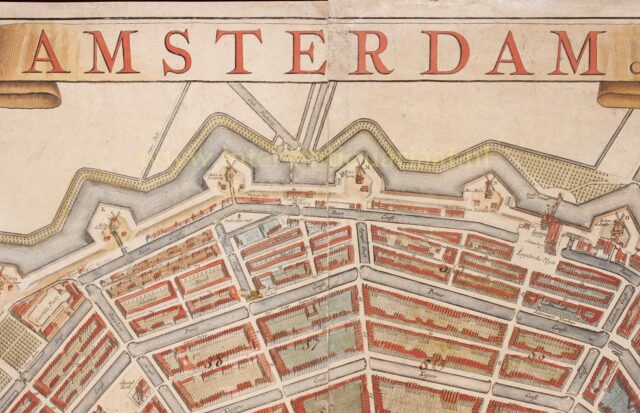 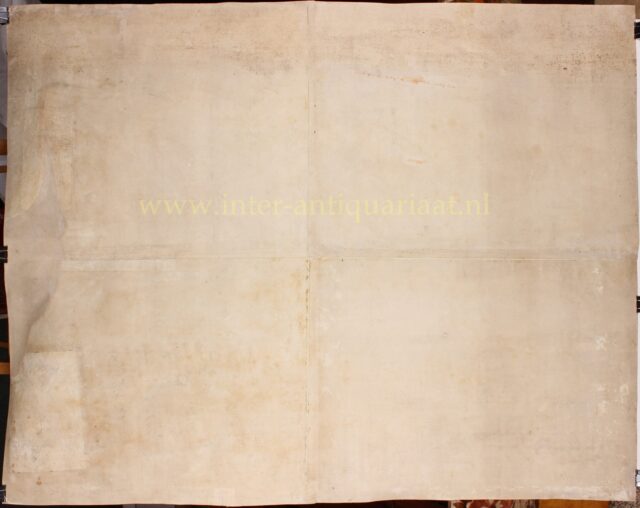 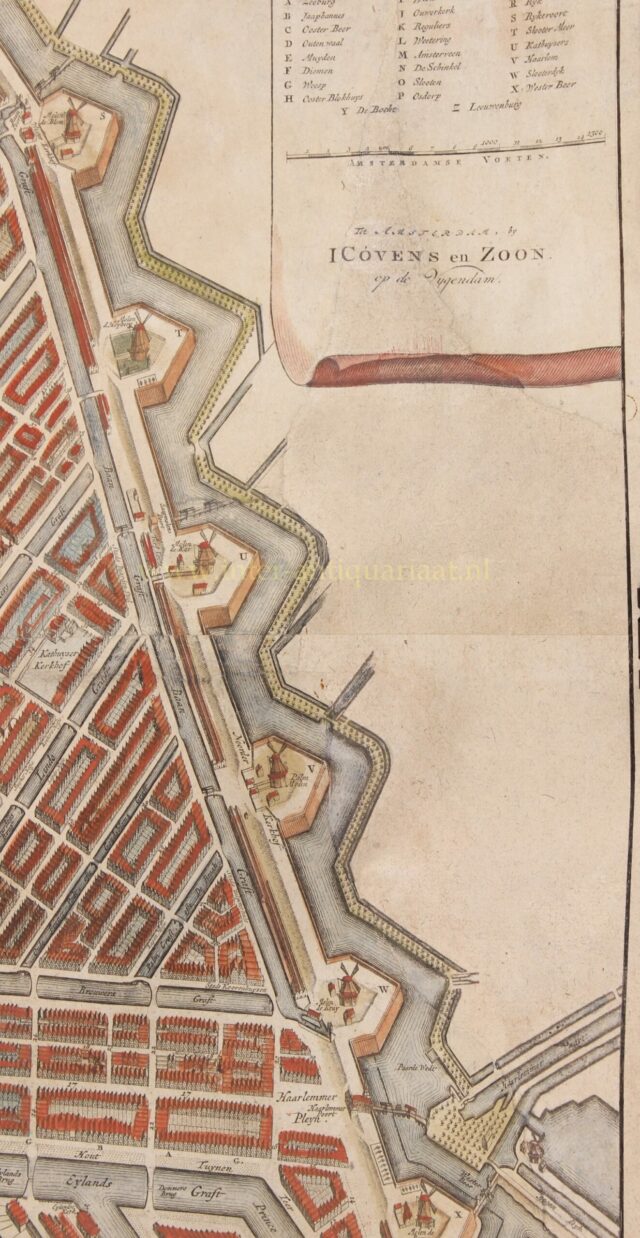 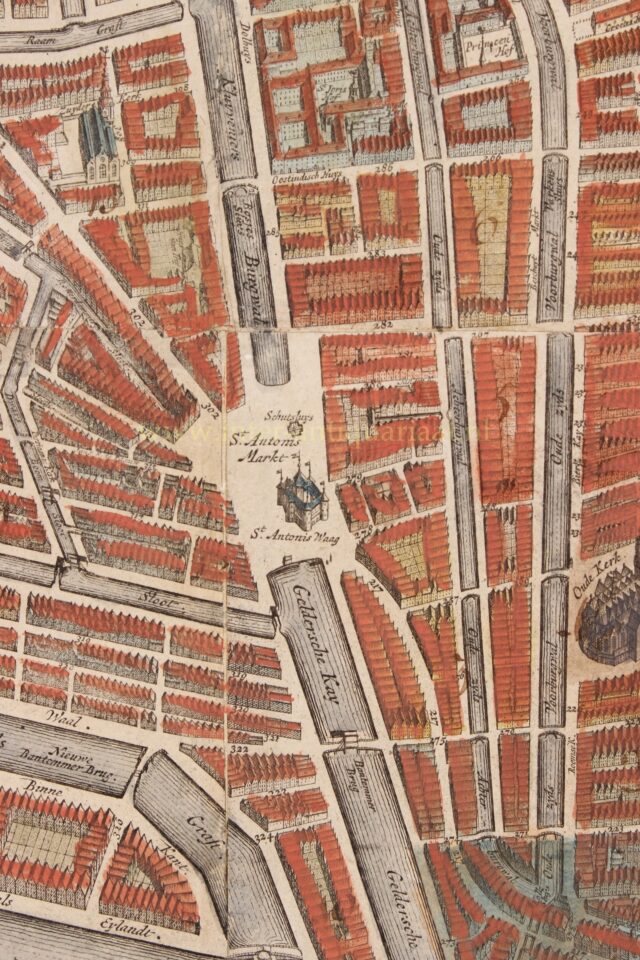 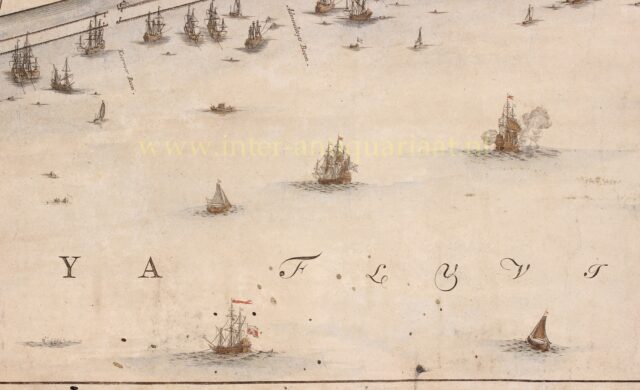 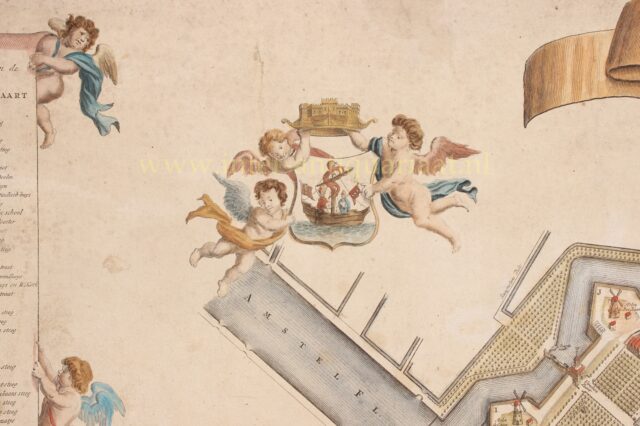 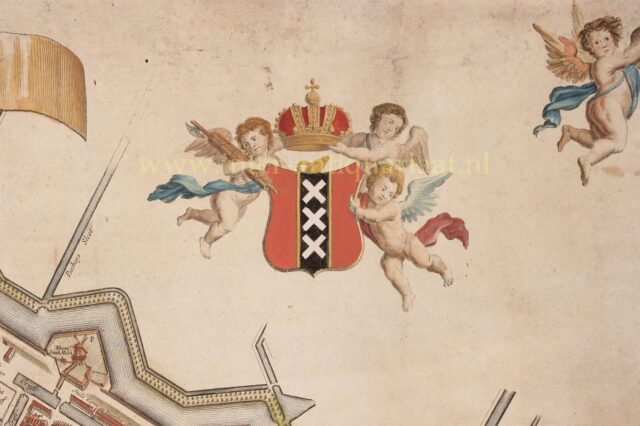 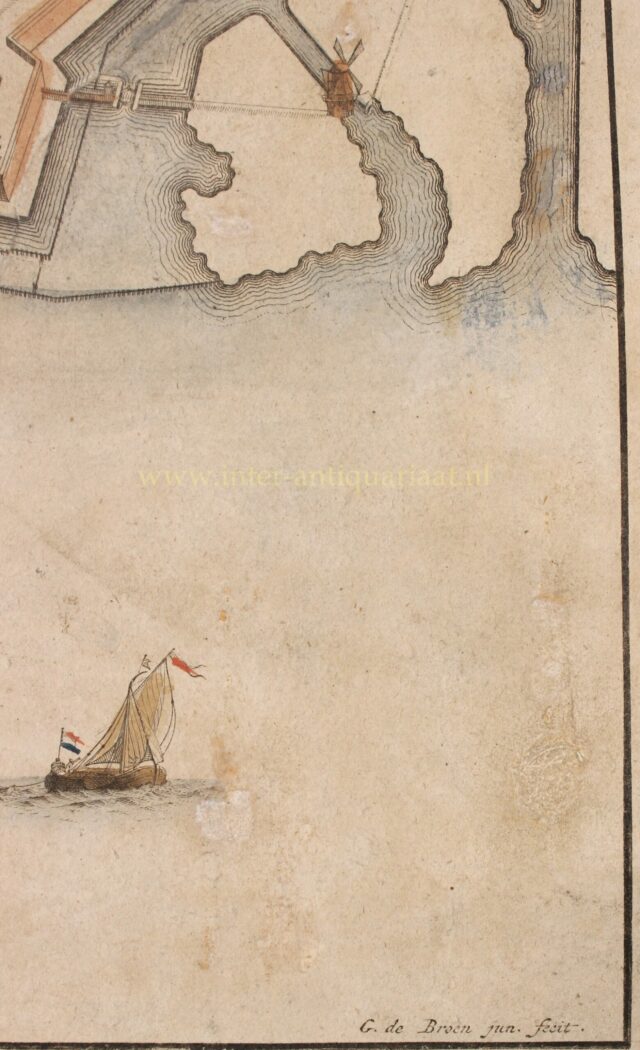 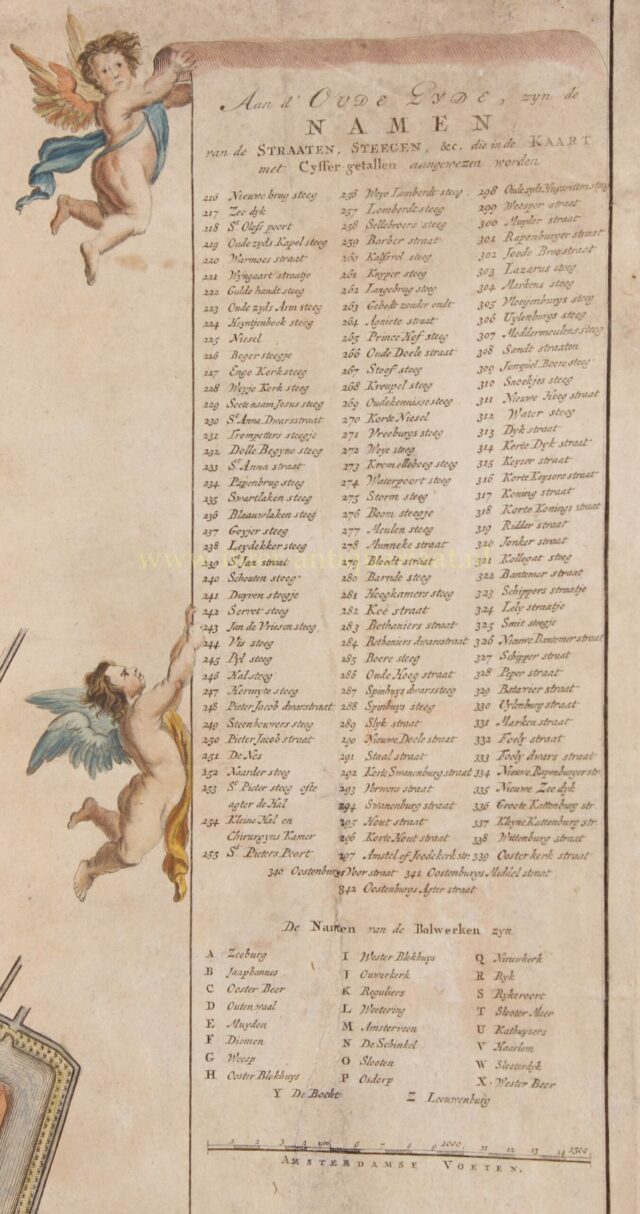 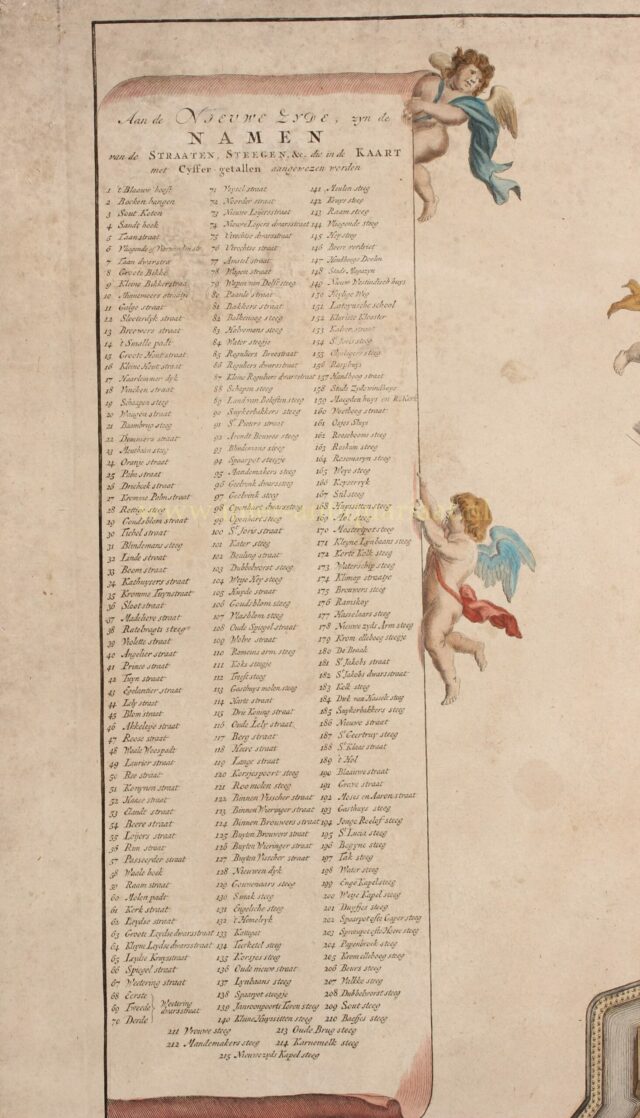 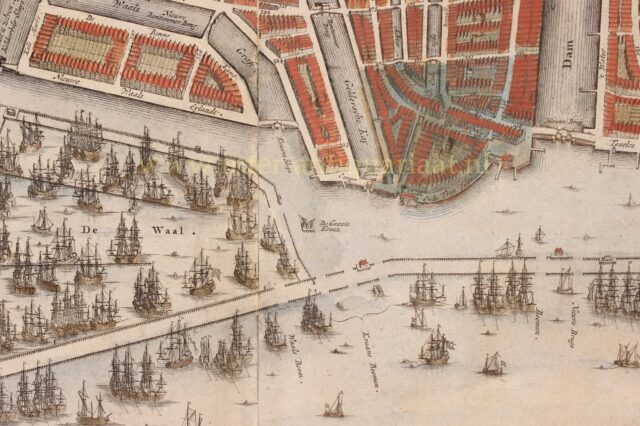 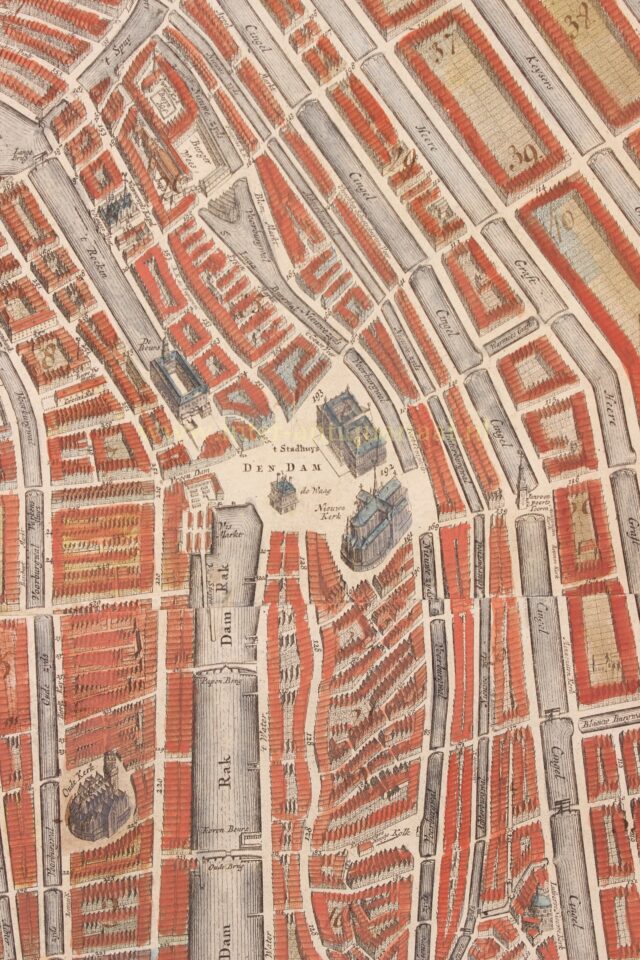 This wall map of Amsterdam made by Gerrit de Broen, first appeared in 1724. The map was reissued six times over almost seventy years. On the one hand, this was to save costs, both purchasing and manufacturing costs were high, and it was cheaper to slightly update the map than to make it anew over and over. On the other hand, not much changed after the fourth city expansion. The city was ‘completed’ within the Singelgracht and due to the deteriorating economy further development stagnated .

The plan is based on a very accurate mapping of the city. The scale is so accurate that it fits almost seamlessly on a modern map! An enormous achievement if you consider that maps in the 18th century were mapped purely by measuring the land.

The rendering of the buildings however, is less accurate. Unlike older bird’s-eye-view plans, Gerrit de Broen has opted for the suggestion of a very detailed map. But if you look closely, you will see that, except for the public buildings, the houses almost all have the same shape and level of detail. Apart from the buildings, the city is also very ’empty’, e.g. there are no trees next to the canals. The result is a very calm, very balanced map image. An organised city. An image that was appreciated in the eighteenth century.

Putti hold the coats of arms on either side of the title ribbon, on the left the city seal with a city crown, on the right the city coat of arms with the imperial crown. One of the putti carries a bundle of rods and a mirror with a snake, the symbols of governmental authority and thoughtfulness, which refer to wise city government.

The decorative patterns in the vegetation of the Nieuwe Plantage neigbourhood originated in De Broen’s imagination. He incorporates his own initials GDB into ‘Park I’.